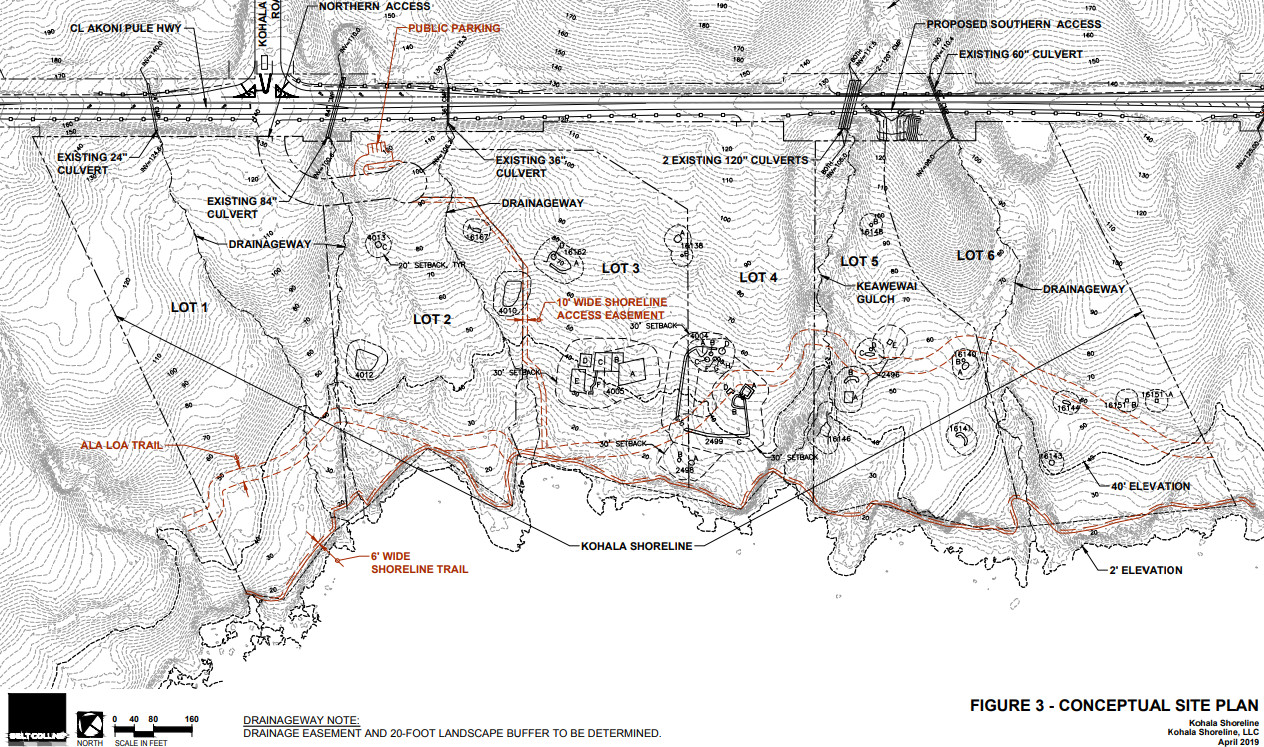 NORTH KOHALA, Hawaiʻi - The six-lot subdivision will be makai of Akoni Pule Highway, and will be developed on a 37.88-acre parcel, 3 miles north of Kawaihae. 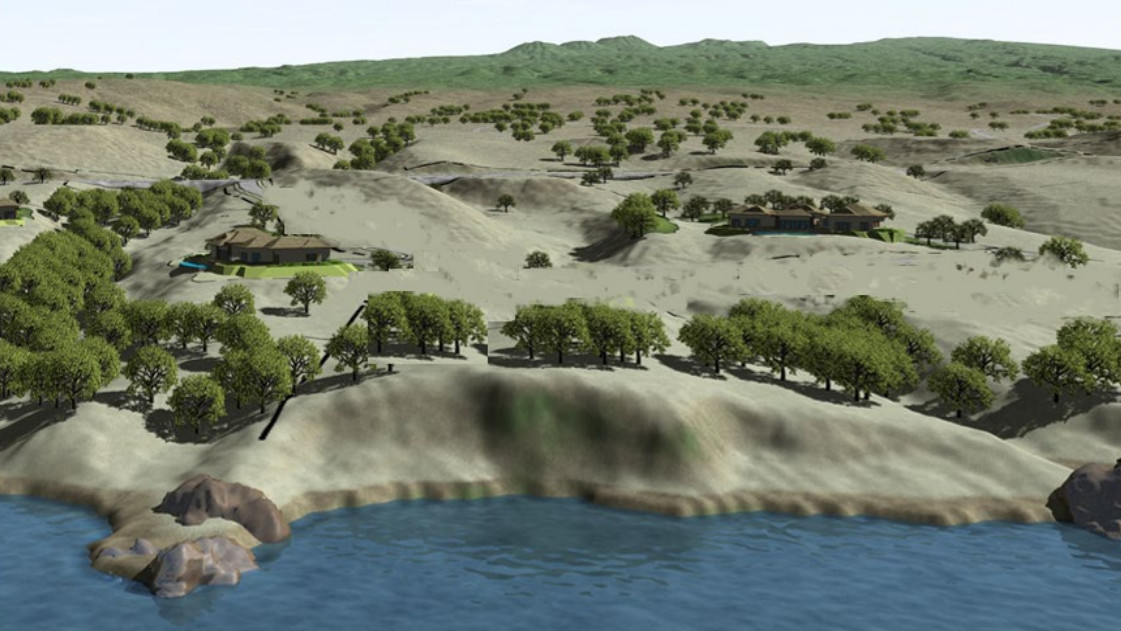 simulated view from the ocean, illustration found in the draft environmental assessment for the Kohala Shoreline project

(BIVN) – A draft environmental assessment has been published for a planned subdivision along the North Kohala coast.

Kohala Shoreline, LLC is proposing to develop a 6-lot subdivision on a 37.88-acre parcel in the Kahuāli‘ili‘i area of North Kohala, about 3 miles to the north of Kawaihae. The development will be situated makai of the Akoni Pule Highway.

Developers say lots would vary in size from about 5 to 8 acres, with all building sites located mauka of the ala loa trail.

The project will need a Special Management Area Use Permit, and a change of zone from the current Single Family Residential (RS-15) to Residential and Agricultural (RA-5a) will be required.

The developers say the current proposal replaces a 2015 plan “that had 50 percent more density and included several building sites below the ala loa.”

“Notice of the Draft EA for the first project was published in the July 8, 2015 edition of The Environmental Notice,” the document explains. “As part of the review process, the project team received a number of comments on concerns including density, lot configuration, public access, historic sites, cultural practices, water use, drainage and marine water quality. The owner carefully considered the comments and decided not to implement the project as proposed, and instead decided to design a new concept with substantial changes that responded to these concerns. Accordingly, the original Draft Environmental Assessment and Anticipated Finding of No Significant Impact (DEA-AFONSI) for the project was withdrawn on September 23, 2018.”

According to the summary found in the new draft EA:

Similar developments are located nearby at Kohala Ranch, Kohala Kai Subdivision and at Kohala by the Sea Subdivision. Road access would be from two permitted access locations along the highway, although one of these locations is proposed to be moved to avoid a gulch crossing. The lots would be provided with internal access and underground electricity, telephone and water service from existing lines along the highway. The future homes would utilize individual wastewater systems designed pursuant to State Health Department requirements and would exceed those requirements by installing aerobic treatment systems, which produce a higher quality effluent that can be utilized for irrigation. The project includes public parking and a mauka-makai shoreline access, as well as a continuous lateral shoreline access in the form of an existing easement near the shoreline. It is also expected that the Ala Kahakai National Historic Trail will utilize the ala loa, which meanders through the makai third of the property. To translate the owner’s mission statement of sustainable development to practical measures, the project has adopted a number of design and mitigation measures that far exceed requirements related to environmental permits. Covenants, Conditions and Restrictions will require adherence to a set of measures based on Low Impact Design (LID) Guidelines. 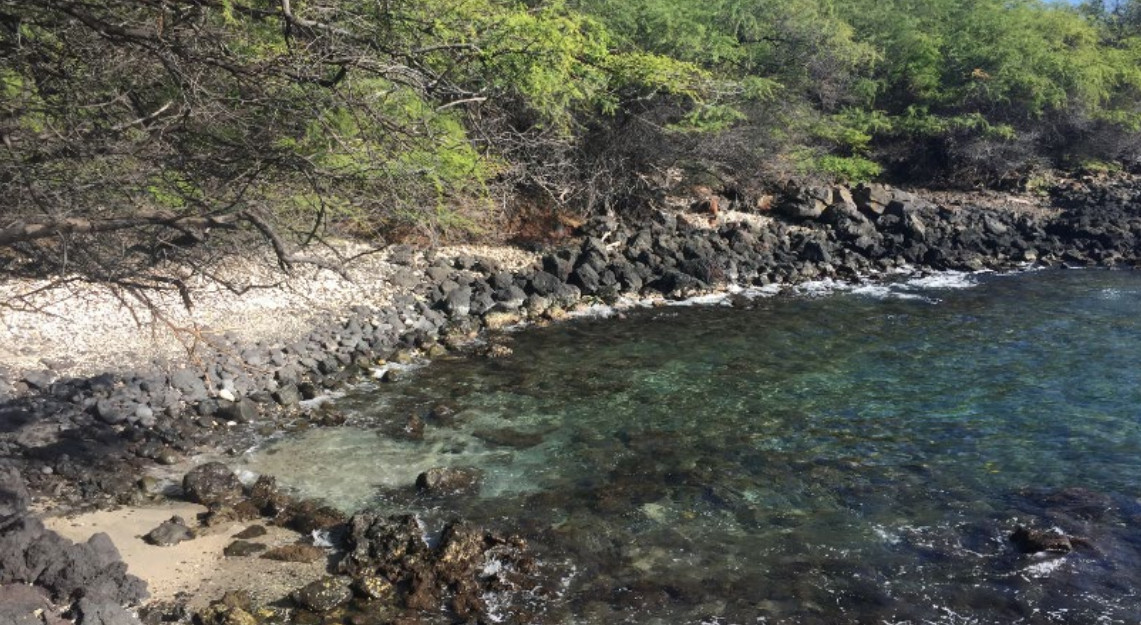 The document delves into mitigation measures that will be undertaken for threats of wildfire, flooding, and climate change, as well as to minimize impacts to cultural and natural resources.

“The project includes a four-stall public parking area that would be open from a half-hour before sunrise to a half-hour after sunset, which would access a new 800-foot long, 10-foot wide mauka-makai pedestrian trail,” the document states, in anticipation of meeting public access and recreation needs. “The continuous lateral shoreline easement near the shoreline will remain in place, but the development will also cooperate with the National Park Service and DLNR’s Na Ala Hele Program so that these agencies may develop the ala loa as an additional lateral shoreline access that is expected to become part of the Ala Kahakai National Historic Trail.”