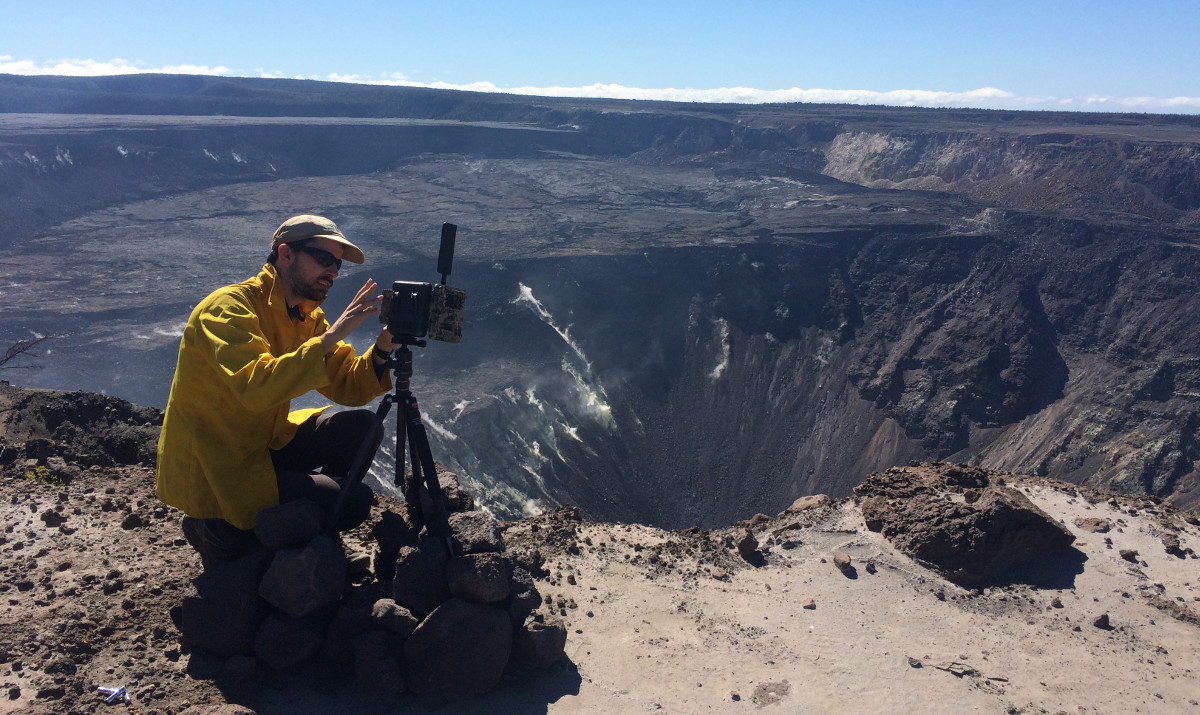 An HVO geologist examines the webcam on the northwest rim of the caldera. USGS photo by K. Mulliken, on May 17, 2019.

Kilauea Volcano Monitoring Update For May 21

Good weather provided clear views of Halema‘uma‘u during a routine visit to the webcam on the northwest rim of the caldera. USGS photo by M. Patrick, May 17, 2019.

(BIVN) – Kīlauea Volcano is not erupting, and remains at a NORMAL/GREEN alert level.

“Monitoring data over the past nine months have shown relatively low rates of seismicity, deformation, and sulfur dioxide emissions at the summit and East Rift Zone, including the area of the 2018 eruption,” the USGS Hawaiian Volcano Observatory stated its weekly update issued every Tuesday.

Last week, scientists stated that they were tracking modest inflationary tilt at the summit. That message was repeated this week:

Since early March, tiltmeters at the Kīlauea summit have recorded modest inflationary tilt. Over about the same time period, a GPS station within the 2018 collapse area has recorded approximately 5 cm (3 inches) of uplift. Satellite radar data (InSAR) show deformation consistent with inflation of the shallow Halemaʻumaʻu source, confirming the trends noted by both tiltmeters and GPS. One possible interpretation is that magma has begun to slowly accumulate within the shallow portion of the Kīlauea summit magma system, 1-2 km or approximately 1 mile below ground level. However, gas measurements have yet to indicate significant shallowing of large volumes of melt. HVO continues to carefully monitor gas output at the Kīlauea summit and East Rift Zone for important changes.

Further east, GPS stations and tiltmeters continue to show motions consistent with refilling of the deep East Rift Zone magmatic reservoir in the broad region between Puʻu ʻŌʻō and Highway 130. This trend has been observed since the end of the 2018 eruption, and while its significance is unclear, monitoring data do not suggest any imminent change in volcanic hazard for this area.

USGS HVO also noted that generally low seismicity continues across the volcano, with earthquakes occurring primarily in the summit and south flank regions.

HVO scientists continue to closely monitor seismicity, deformation, and gas emissions for any sign of increased activity at Kīlauea.