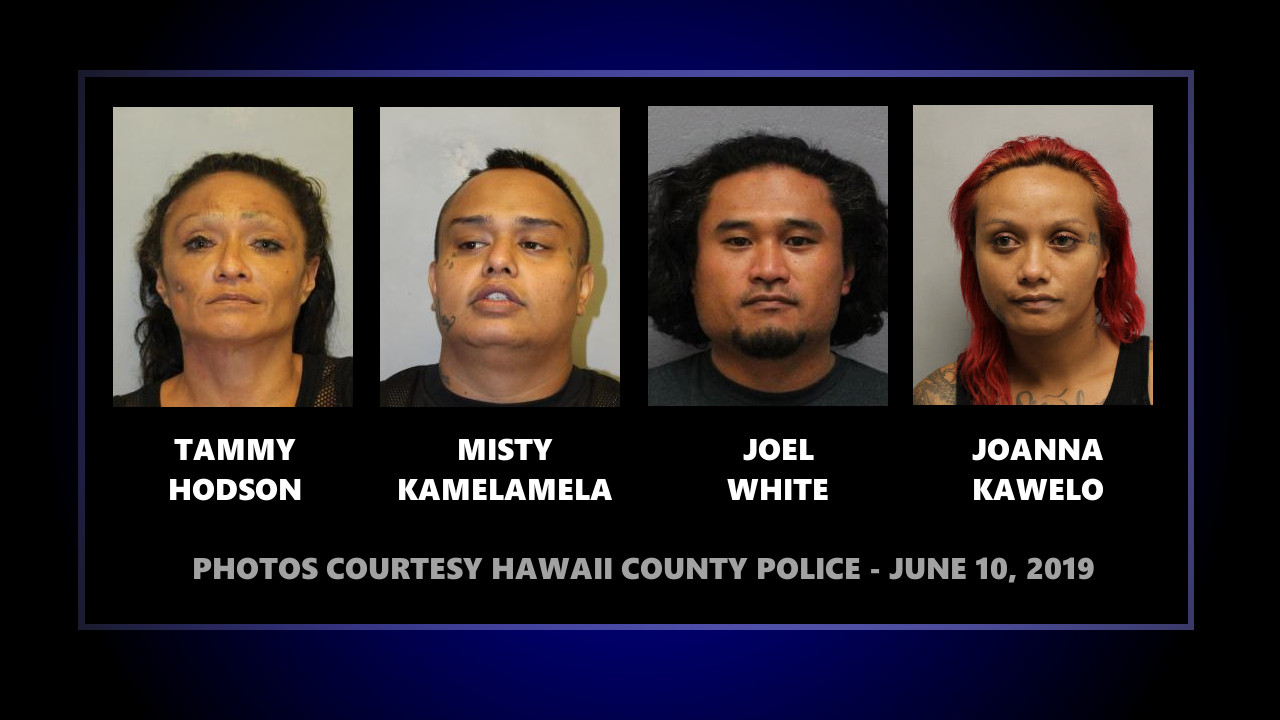 HAWAIIAN PARADISE PARK - Three of the four people arrested were charged by police for the incident that was reported to have occurred the last week of May.

(BIVN) – Hawaiʻi Island Police are investigating a reported kidnapping and assault that occurred the last week in May in Hawaiian Paradise Park.

This media release, issued on Monday, details the four arrests that were made:

Police have charged three individuals and arrested a fourth for multiple offenses stemming from a kidnapping and assault investigation that was reported to have occurred Hawaiian Paradise Park in the Puna District during the last week in May 2019.

On May 31, 2019, a 36-year old female being treated at Hilo Medical Center for multiple injuries reported she had been kidnapped and held at a Hawaiian Paradise Park house for several days where she was beaten, sexually assaulted, and threatened with a firearm. Detectives from the Criminal Investigation Division obtained a search warrant which was served on a 29th street address with the assistance of the Special Response Team on Thursday morning (June 6). Police arrested Tammy K. Hodson (F-50) and Misty K. Kamelamela (F-32) who were at the house. Joel H. White (M-40) was arrested in South Kohala on Friday, and Joanna L. Kawelo (F-35) located and arrested this morning in Nanawale Estates in the Puna District.

Joel Hanalei White, of Kamuela, was charged with one count of Kidnapping and one count of first-degree sexual assault and was being held at the police cellblock in lieu of $35,000.00 total bail.

Joanna Lei Kawelo of Pāhoa was arrested for three outstanding warrants totaling $1,400 bail as well as an arrest warrant related to the offenses of Kidnapping, Assault, Ownership possession Prohibited, Terroristic Threatening, and Sexual Assault; she is being held at the Police Cellblock pending further investigation and charging decision.

Police ask anyone who may have has additional information on the incident to contact Detective Richard Itleong of the Area I Juvenile Aid Section at (808) 961-2278.