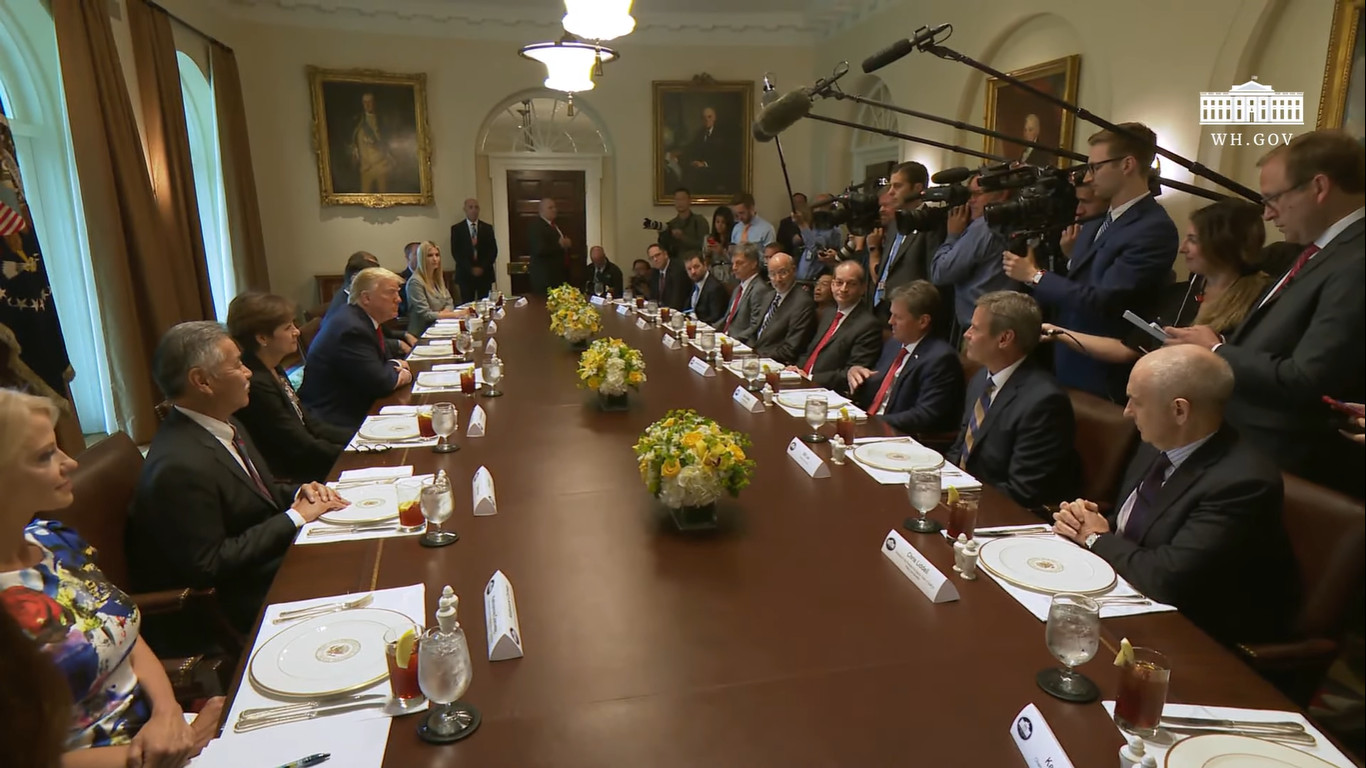 image from video courtesy the White House. Governor David Ige is on the left, sitting on the same side of the table as President Trump.

WASHINGTON D.C. - Gov. David Ige joined seven other governors for a discussion on workforce development with President Donald Trump and Secretary of Labor Alex Acosta at the White House today.

(BIVN) – Governor David Ige had a seat at the table with President Donald Trump and other governors Thursday at the White House, in order to talk about workforce development.

Media was allowed into the room to record part of the lunch meeting, and captured the moment where President Trump spoke directly to Governor Ige.

“Thank you, David, how’s everything going?” President Trump said, as he introduced the Hawaiʻi governor to the others at the table.

“Terrific, going very well,” Governor Ige responded. “We also appreciate the signing of the disaster relief. As you know, we had a challenging year.”

The office of Governor Ige issued this media release on Thursday evening:

Gov. David Ige joined seven other governors for a discussion on workforce development with President Donald Trump and Secretary of Labor Alex Acosta at the White House today. The conversation focused on how states can prepare our communities for emerging requirements of jobs of the future, including partnering with states on occupation licensing reform, child care, paid family leave, and vocational skills training.

“For the first time in our country, we have more job vacancies than we have qualified people to fill them. Hawai‘i is among the states that are working to prepare the workforce for those jobs – expanding paid internships and apprenticeship programs in construction, cybersecurity, IT, healthcare,” said Gov. Ige.

The governor also met with Rear Admiral Doug Fears on hurricane disaster preparedness and resiliency. Fears serves as a deputy assistant to the president and is Homeland Security and Counterterrorism advisor on the National Security Council staff. Gov. Ige updated Admiral Fears on Hawai‘i’s recovery progress in the wake of Hurricane Lane and other natural disasters in 2018.

Earlier in the day, the governor attended a Pentagon meeting with Gen. Joseph L. Lengyel, Chief of the National Guard Bureau and member of the Joint Chiefs of Staff.