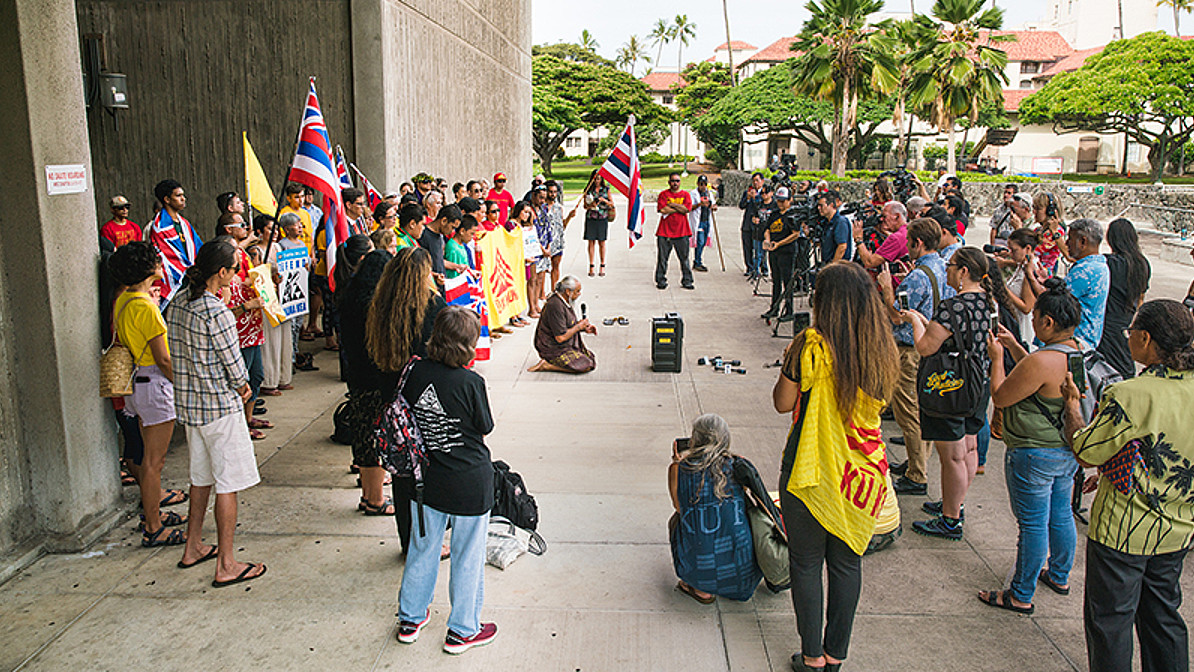 HONOLULU, Hawaiʻi - A Kū Kiaʻi Mauna press conference was held today on Oʻahu, and the Hawaiʻi DLNR responded to concerns that a LRAD device will be deployed on the mountain.

(BIVN) – State officials and opponents of the Thirty Meter Telescope project went back and forth Friday, disputing each other’s information regarding the response to the situation on Mauna Kea.

Most of the information pertained to statements made Friday at a Kū Kiaʻi Mauna press conference held outside the Kalanimoku State Office Building on Oʻahu.

The press conference was held to coincide with the first public meeting of the Hawaiʻi Board of Land and Natural Resources since the TMT project was granted a Notice To Proceed. Organizers, which included KAHEA: The Hawaiian-Environmental Alliance, said they planned to speak about the significance of the hale and ʻahu that were removed from the mountain last week, “and the concerns they have with the potential uses of excessive force in upcoming actions.”

Among the speakers at the press conference were Kealoha Pisciotta of Mauna Kea Anaina Hou, and Kealiʻi Freitas, a practitioner of uhau humu pōhaku who helped to erect the ʻahu on the mountain.

State officials said the ʻahu – and the hale – were unauthorized structures and had to come down. The University of Hawaiʻi, which holds the Conservation District Use Permit allowing the TMT to be constructed on the mountain, and which also is in charge of managing the mountain and its resources, addressed this in a recent statement:

The removal of the ahu was not the University of Hawaiʻi’s first choice. The university and others attempted to engage with those believed to be responsible for building the unauthorized structures in hopes of reaching an agreement on the future of the ahu. Those efforts were not successful.

UH cooperated with state agencies in removal of the ahu so that the Conservation District Use Permit CDUP for construction and operation of TMT can be acted upon safely. The ahu were removed in a manner consistent with guidance from Kahu Kū Mauna, the cultural advisors to the Maunakea Management Board and UH.

It is important to remember that the Hawaiʻi Supreme Court specifically affirmed BLNR’s conclusion that these two ahu that were constructed on the TMT Access Way in 2015 as protests against TMT are not protected as Native Hawaiian traditional or customary rights.

During today’s press conference, Pisciotta took issue with the UH claim. She said that she was invited to go to lunch by Kaʻiu Kimura from the ʻImiloa Astronomy Center, but she could not make it, “and that is their explanation about why I turned it down.”

“If the Attorney General wanted to have a conversation with any of us, she well knows how to reach us,” Pisciotta said.

Also during the press conference, Shelley Muneoka spoke as a board member of KAHEA: The Hawaiian-Environmental Alliance. The statement was provided in writing afterwards.

Last weekʻs press conference hit the pinnacle of absurdity when just hours after seeing cherished hale and ahu destroyed, Governor Ige declared that the State would “proceed in a way that respects the people, place and culture that make Hawaiʻi unique”. Itʻs not respectful to throw cultural and religious items into a truck labeled “Junk Removal”. Nor is it respectful to see workers flinging the stones that once formed the foundation of a beloved community gathering space through their legs. UH President Lassner offered an apology for the pain that he knows TMT will cause, but forges ahead anyway. He claimed that TMT will be the last new site developed on Mauna Kea and pledged to decommission 5 other telescopes — which is already a requirement of the current general lease that expires in 2033 and is therefore an unimpressive claim of mitigation for the construction of an 18-story building. Governor Ige closed with a patronizing warning to those who want to “exercise their constitutional right of free speech” to conduct ourselves without endangering the lives of others. An ironic statement considering that in the past kiaʻi mauna on Haleakalā — also defending against a telescope — shielded with lei, prayer and song, were confronted by law enforcement armed with guns, riot gear and a sound cannon. A military grade weapon that KAHEA recently learned docare (dlnr enforcement) has procured.

Lance Collins, an attorney representing KAHEA, spoke about the DLNR’s recently purchased LRAD, or Long-Range Acoustic Device – which he also called a sound cannon – that KAHEA says “has been used for crowd control at confrontations with water protectors at Standing Rock and potentially violates state and federal laws.”

Following the press conference, the Hawaiʻi DLNR confirmed the LRAD was purchased, but said the statements were otherwise inaccurate, and offered this rebuttal:

Long Range Acoustic Device systems are currently used in 72 countries and in more than 400 U.S. cities, counties, and states to ensure public safety communications and emergency warnings are clearly heard and understood.

DOCARE officers are often called upon in their roles as State Law Enforcement Officers to provide warnings in emergency situations for public safety purposes.

Over the past year, DOCARE officers have had the responsibility of warning large groups of people of impending hurricanes and the Kilauea eruption in Puna.

The LRAD Corp. states: “The system purchased by the Hawaii Dept. of Land and Natural Resources is used for public address and emergency notifications. LRAD is not a ‘sound cannon.’ The LRAD 100X system has been used by local law enforcement agencies to broadcast evacuation notices; for instance during wildfires in Colorado last year.”

The public address and hailing system is not a weapon and is not listed in DOCARE’s use of force continuum.

The assertion that DOCARE utilized an LRAD in association with protests on Maui’s Haleakala several years ago is completely false.

The purchase of a portable battery powered public address and hailing system kit by DOCARE was done following state procurement rules and is a matter of public record.

This was in no way a “secret purchase” as alleged by Kahea. Kahea made two open records requests, to which DOCARE responded in full.

The recent television report depicted a completely different model with different capabilities and was not an accurate depiction of the device acquired by DLNR/DOCARE. We note that the 100X is the smallest such system offered by LRAD.

We understand and acknowledge the concerns raised regarding use of excessive force on nonviolent noncombatants. The LRAD system purchased by DOCARE is not intended to be used in that way. The LRAD is a legitimate useful tool for law enforcement in appropriate situations in compliance with law and standard use of force policy.

The DLNR also added: “At today’s news conference, several speakers indicated that officers serving with the DLNR Division of Conservation and Resources Enforcement (DOCARE) do not have full police powers. Please review Hawaii Revised Statutes HRS-199-4 and HRS-199-3. Specifically see the first paragraph in HRS-199-4. DOCARE Officers are sworn to uphold all the laws of the State of Hawai‘i and its counties with full police powers and will conduct all other duties as assigned.”

“Itʻs time for hard conversations with family and friends,” Muneoka said at the press conference, closing her statement with a quick message “to the kiaʻi across the pae ʻāina and beyond”:

Itʻs time for hard conversations with family and friends. We need you to reach out and educate the people who know and trust you. Now is the time to prepare. Find like-minded, like-valued folks and form relationships and make plans to take care of each other in this struggle. We have a long road ahead and it is important to mālama ourselves and each other. Many people have asked about fundraisers or ways to help, we will be putting out a list of vetted organizations to give to, please look for that and give to whoever you know and trust. Mahalo nui to everyone for coming today, to the kiaʻi standing behind us and for those who continue to stand. We want to especially thank the speakers who represent a broad base of support and love for Mauna Kea.