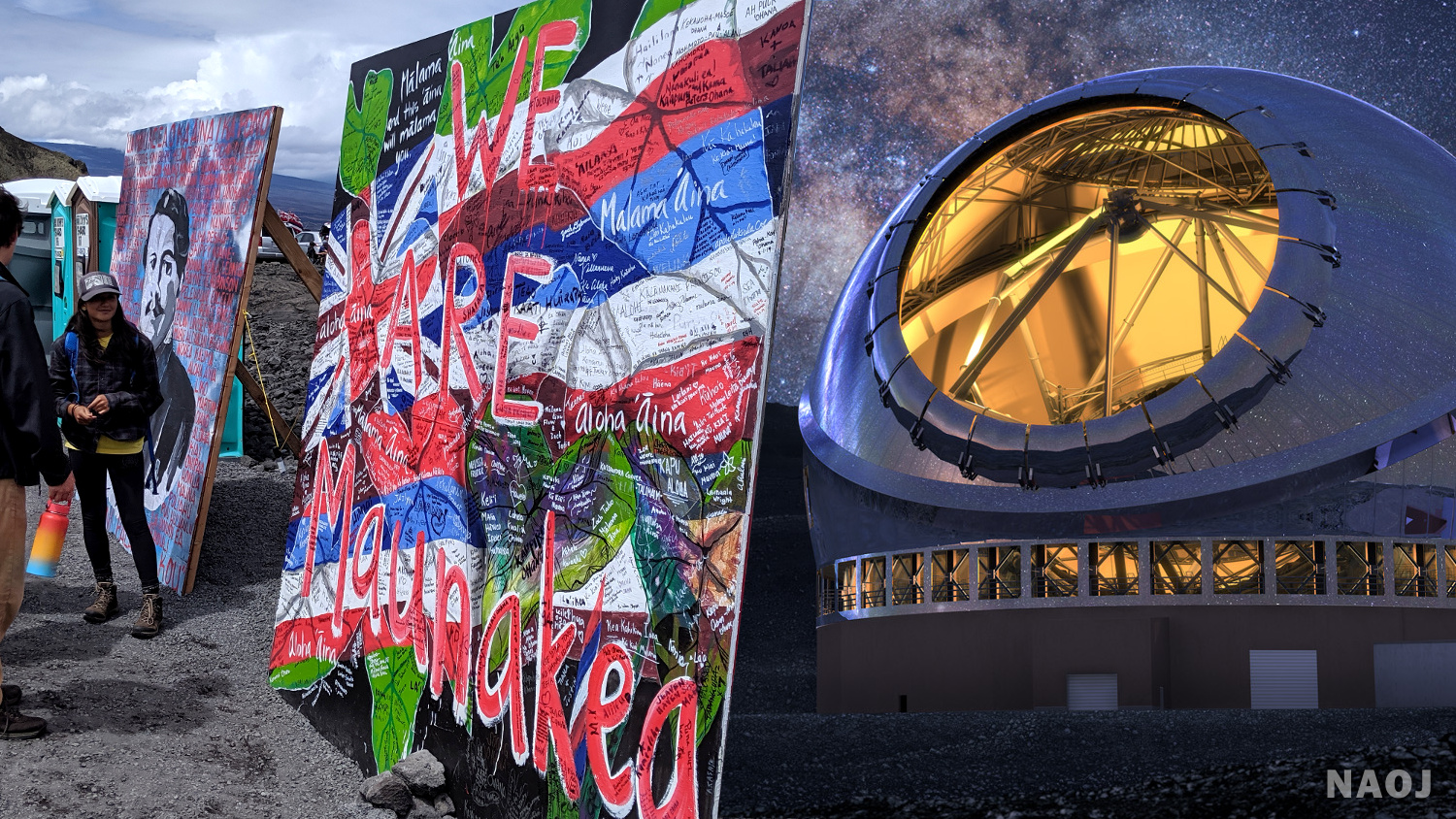 graphic from photo by David Corrigan / image by NAOJ

MAUNA KEA, Hawaiʻi - State Senator Kai Kahele, Kurt Fevella, and the Hawaiʻi Stevedores visited the base of Mauna Kea on Monday, as the “Plan B” for TMT in La Palma made headlines.

Heavy rain and occasional thunder marked Day 22 on Mauna Kea, as Thirty Meter Telescope opponents continued to hold ground on the access road to the summit. Today began the 4th week since the scheduled start of construction of the TMT, but crews have been unable to ascend the mountain due to the fervent opposition.

Hawaiʻi State Senators Kai Kahele (D) and Kurt Fevella (R) visited the base of Mauna Kea on Monday. The legislators, both of whom have been critical of the University of Hawaiʻi’s management of the mountain, participated in the protocols fronting the kūpuna tent on the Mauna Kea Access Road. 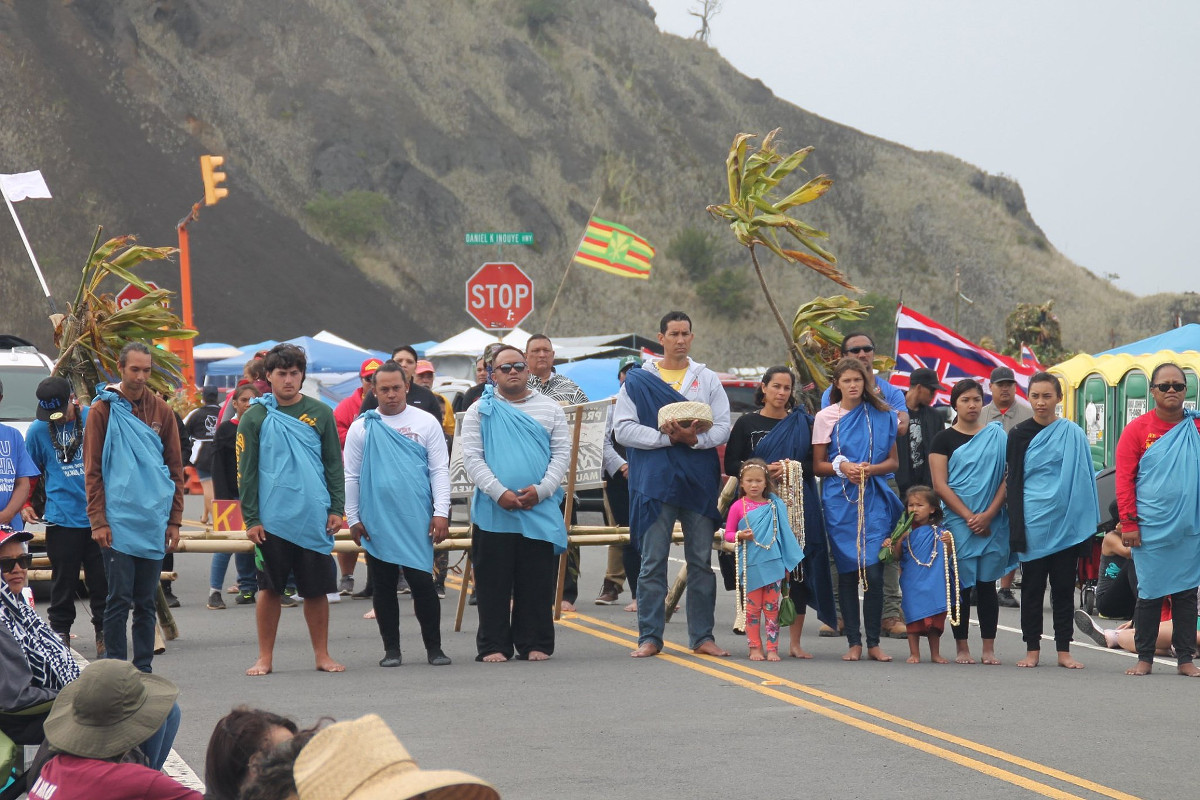 The Associated Press reported Monday that TMT plans to proceed with a request to obtain a building permit for the Canary Islands. Canary Islands Astrophysics Institute Director Rafael Rebolo told the AP that the Spanish officials solidly back the TMT if the project “needs us.”

The article prompted a response from TMT executive director Ed Stone. “We continue to follow the process to allow for TMT to be constructed at the ‘plan B’ site in La Palma should it not be possible to build in Hawaii,” Stone said. “This process has been ongoing since 2016. Maunakea remains the preferred site for TMT.”

As the news of TMT’s Canary Islands building permit request made headlines on Monday, another news release was issued by Ben Magec – Ecologists in Action. Hawaii News Now reported on the group that is opposing the observatory on the other side of the world.

“Ben Magec – Ecologistas en Acción”, the federation of environmental associations of the Canary Islands, wants to show its solidarity and empathy with the social movement that protects Mauna Kea, and we express our respect for the Kahunas. Their determination inspires us.

We can understand what is happening in Hawaii concerning the TMT. On the small island of La Palma, with a similar surface area as the island of Moloka’i, the development of astronomical infrastructures has been done without respect for the people and for the natural and cultural values. It has cost us a notable part of our nature and we have lost archaeological sites that were very important for the understanding of the culture of our aboriginal ancestors.

Garafía, the municipality with already 14 telescopes and 20 more projected, is however the poorest municipality in the Canary Islands. They have never received a financial compensation for the use of their land. That is why the struggle for dignity that is being fought in Hawaii is not strange to us.

The Thirty Meter Telescope International Observatory (TIO) claims to have a backup site on the Canary Island of La Palma, an argument used to put pressure on the Hawaiian authorities, but that has now turned against them when used by TMT opponents. It has been assumed that the supposed arrival of the TMT on the Canary Islands will not be hindered by administrative or judicial procedures and that the people and local organizations will not oppose it. However, here the feeling is growing that our mountain has already exceeded the capacity to house more telescopes and that we have already paid a high price for astronomical science. We are strongly opposing a project that will have a very negative impact on a unique natural area of high value that is part of the European Natura 2000 network, one of the world’s largest networks of protected natural areas.

Actually, the “Plan B” for the TMT is not a very solid plan at all. The only thing TIO had achieved so far on La Palma is a 75-year concession of 9.8 hectares of land for the construction of the TMT for the ridiculous amount of approximately $1,250 annually. But Ben Magec Federation took legal action against this concession and a judge of the Superior Court of the Canary Islands recently has revoked this concession because of violations of European environmental laws and a wrong estimation of the value of the concession. This means they will have to start the procedure from the beginning, causing a substantial delay.

If they insist in getting authorisation to build the TMT in this legally protected area on La Palma, each step will lead to additional legal action on our part. We will not hesitate to take it to the Supreme Court of Spain because we are convinced that, in relation to the TMT, public administrations are making decisions that are in conflict with Spanish and European Laws. We have no less reason or less determination than the Hawaiian TMT opponents.

The Hawaiʻi Department of Health Clean Water Branch says it will accept requests for a contested case hearing on the renewal of TMT’s NPDES Permit (National Pollutant Discharge Elimination System) no later than Friday, August 9, by the close of business at 4:30 p.m.

A public hearing on the permit was held on June 25 in Kona, at which time numerous testifiers who oppose the observatory requested the contested case hearing.