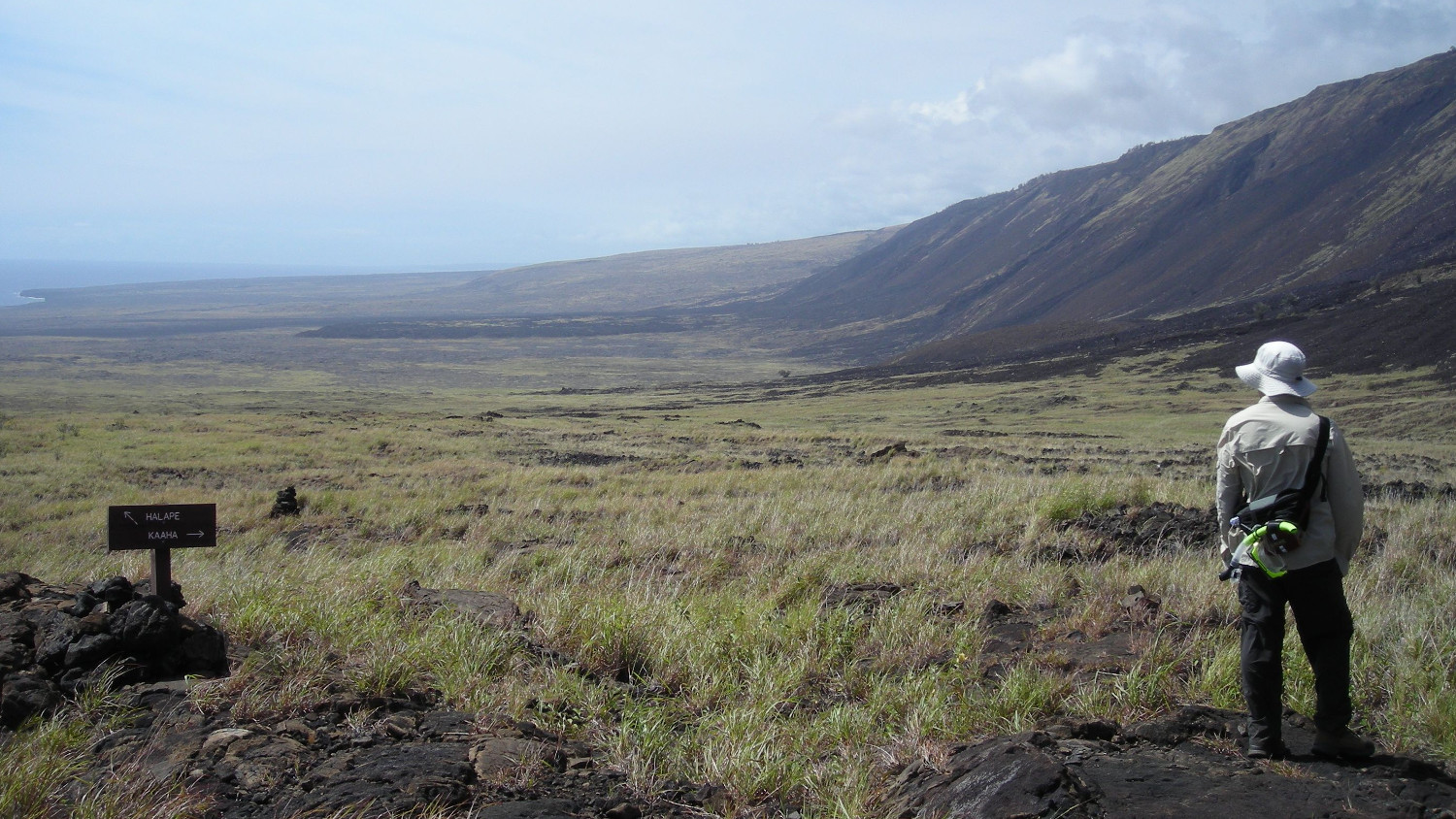 The Hilina Pali on Kīlauea Volcano's south flank is visible evidence of the steep Hilina fault system. Beneath this system lies the flat-lying decollement fault that has no visible surface expression but was responsible for the May 4, 2018, magnitude-6.9 earthquake. Photo courtesy of Ingrid Johanson.

HAWAIʻI VOLCANOES NATIONAL PARK - Scientists examine the relationship between big quakes, like the Magnitude 6.9 that shook the South Flank of Kīlauea Volcano at the start of last year's eruption on the lower East Rift Zone, and the Hilina slump.

(BIVN) – Last year, during the volcanic activity on the lower East Rift Zone, scientists with the USGS Hawaiian Volcano Observatory often found themselves answering questions about the Hilina slump, and tried to allay concerns expressed by the public that a “catastrophic failure event” would send a devastating tsunami across the Pacific. HVO assured the public that the likelihood of such an event was incredibly remote, even during the remarkable volcanic activity that occurred over the summer of 2018.

Kīlauea volcano is no longer erupting, and has been quiet for a year. Now, scientists are revisiting the discussion in this week’s Volcano Watch.

The pali (cliffs) of Kīlauea’s south flank are some of the volcano’s most striking features. Reaching up to 500 m (1500 ft) high, they stand out against the otherwise gentle slopes of Hawai’i’s most active shield volcano. These pali, including the Hilina Pali, the Holei Pali, and others, are often referred to as faults, and are together called the Hilina fault system. The faults form head-scarps; the above-ground evidence for a large landslide called the Hilina slump.

Offshore seismic reflection surveys (similar to doing an ultrasound on the earth) show rock and rubble layers consistent with the Hilina slump extending to about 4 km (2.5 mi) below the surface, and its leading edge to be about 22 km (13 mi) offshore. While the size of the slump and the possibility of catastrophic landslide can be alarming, the seismic reflection data also show that there is good news.

The good news is courtesy of the decollement fault below Kīlauea’s south flank. The decollement fault is a nearly horizontal fault at the boundary of the original ocean floor and overlying volcanic rocks. It lies deeper below the surface than the Hilina slump, but although they are right on top of each other, current evidence shows that the two are not connected. Instead, the Hilina slump rides on top of the portion of the island moving with the decollement.

It was the decollement fault that was responsible for last summer’s magnitude-6.9 earthquake and for the magnitude-7.7 Kalapana earthquake in 1975. Slow movement on this fault is also responsible for moving the south flank steadily seaward and for episodic slow slip events that nudge the flank an additional several centimeters (just over an inch) farther every 3-4 years.

When the decollement fault slips, the over-riding rocks move seaward and slightly up. Over many thousands of years, the slight upward motion has caused a ridge to form in the ocean floor where the fault approaches the surface. In 2003, scientists from Rice University concluded that this ridge acts as a backstop, making it more difficult for the large Hilina slump to slide. This is similar to how a bookend prevents books from sliding down a shelf.

In this way, continued slip on the decollement helps prevent catastrophic landslides. However, decollement slip also produces large earthquakes that can affect the slump. In 1975, two faults in the Hilina fault system moved by over a meter (yard) during the magnitude-7.7 Kalapana earthquake. The magnitude-6.9 earthquake in 2018 resulted in a lot of questions from the public about whether it might trigger slump motion. However, in the days that followed, there was no evidence for widespread motion of the Hilina slump.

Indeed, scientists recently reanalyzed deformation data on Kīlauea’s south flank and found that only a few isolated portions of the Hilina fault system moved, mostly by less than a centimeter (half-inch). The only location with substantial movement during the earthquake, was a short (2.5 km, 1.5 mile) segment of a previously unmapped fault near the earthquake’s epicenter. Furthermore, data from the 17 years prior to the magnitude-6.9 earthquake showed no resolvable motion of the Hilina fault during that time period.

Despite triggering motion on the pali, no catastrophic failure of the slump occurred in either 1975 or 2018. Plus, in 2018, motion is attributed to only the shallowest part of the slump, not the entire structure. This assures us that some motion can occur at the surface, without that motion continuing deeper in the slump and generating widespread failure.

Taken all together, these observations suggest that movement on the Hilina fault system occurs only very occasionally and perhaps only together with the very largest earthquakes, like the 1975 Kalapana earthquake. The Hilina fault system certainly plays a role in Kīlauea’s complex dynamics and understanding that role is important in order to know the full range of hazards on the volcano. The USGS Hawaiian Volcano Observatory continues to monitor motion on Kīlauea’s south flank to better determine the area’s hazard potential.