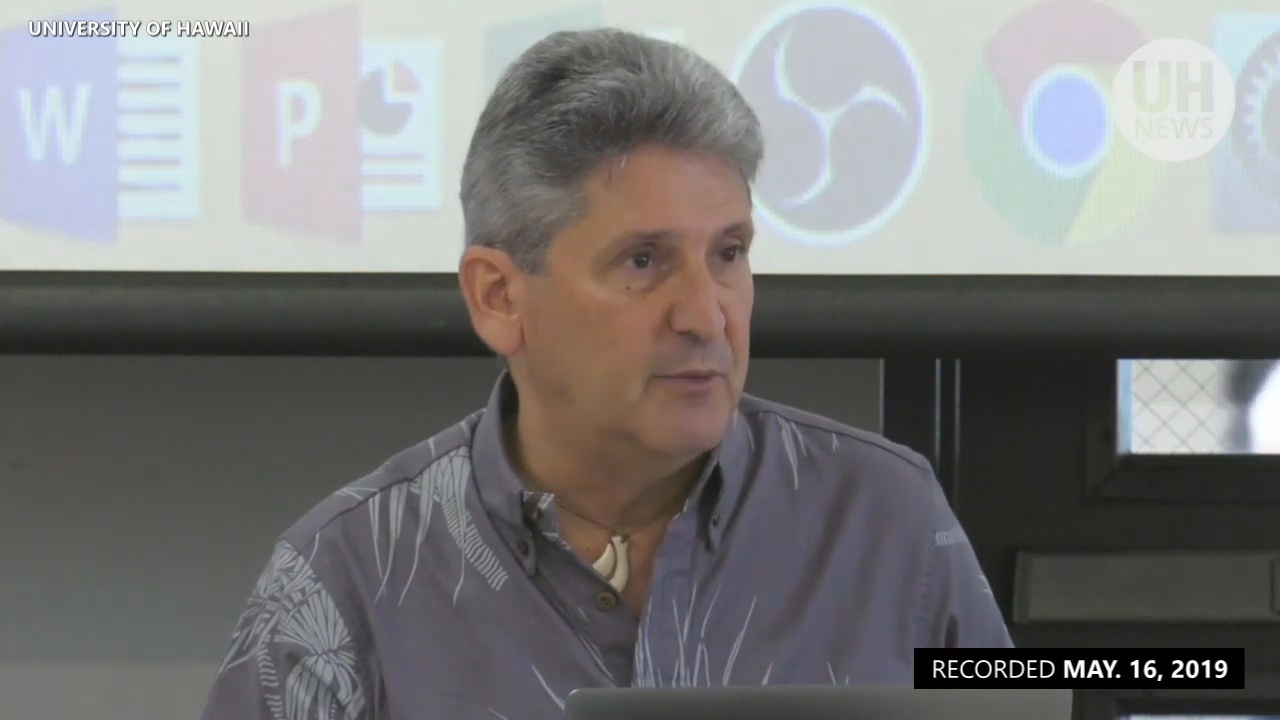 HONOLULU, Hawaiʻi - The University of Hawaiʻi President David Lassner is denouncing recent statements made by faculty after an organization said in a media release that they were racist attacks.

(BIVN) – The internal conflict within the University of Hawaiʻi over the Thirty Meter Telescope project continues, as the president of the university today denounced bigotry and defended the reputation of Kamehameha Schools in a statement to the media.

The latest round of divisive debate concerning Manua Kea apparently occurred at a symposium on the TMT, and sprouted from a discussion on “why Hawaiians are underrepresented in the field of physics and astronomy”.

On September 18, faculty and students at the university – under the banner “Mauna Kea Protectors of the University of Hawaiʻi” – issued this news release:

We, the Mauna Kea Protectors at the University of Hawaiʻi, unambiguously condemn the unbridled racist attacks on Hawaiian faculty by those faculty supporting the TMT. We call upon the Board of Regents and President David Lassner to do the same.

We demand that the President and the Board of Regents intervene. The recent escalation of racist and discriminatory acts against Hawaiian faculty on campus has created an atmosphere of hostility that may be irreversible if the administration does not immediately enforce the University’s E9.201 Workplace Non-Violence policy. We also draw attention to the State of Hawai’i’s 601.001 Discrimination / Harassment-Free Workplace policy: “The State and its appointing authorities are committed to promoting and maintaining a productive work environment free of any form of discrimination or harassment based on a person’s protected class (in this case, race) and retaliation for engaging in protected activity.”

Last week, at a symposium on the TMT, several faculty members discussed why Hawaiians are underrepresented in the field of physics and astronomy. A senior, tenured pro-TMT physics professor publicly responded, “We know that the Kam Schools are academically unsuccessful…a student that we have here who is working on his Master’s and is a physics teacher at Kam Schools, he told me that he had to graduate people in physics that couldn’t even read.” A Hawaiian professor (and graduate of the Kamehameha Schools) in the audience told the physics professor his statement was unfounded and racist. The physics professor responded, “I don’t care.” Recordings of the confrontation were shared with the President and UH administrators.

A UH email listserv also shows a pattern of racism and discrimination occurring on campus. Several senior, tenured professors have engaged in disgraceful, racialized discussions about Hawaiians. The same physics professor commented that, “Just about the only thing Hawaiian about UH is that it is in Hawaii and educates many Hawaiian residents, including a few folks with Hawaiian blood. But UH is not here to serve the tiny remnant Hawaiian population preferentially. We honor them and the good things we take from the old Hawaiian culture (and many others), but they are in the larger scheme of the future of Hawaii, not important.” Other senior science-based pro-TMT faculty have made similar statements on the same UH listserv that create a serious hostile teaching, learning, and research environment directed against Hawaiians. President Lassner and other UH administrators are members of the listserv and have taken no immediate steps to end these violent email attacks. Although the physics professor does not speak for the science community, the President’s silence on this matter gives license to racist attacks and creates fear and hostility on our campus.

While the Board of Regents and President Lassner are preoccupied supporting the TMT development, who at the University is protecting Hawaiian faculty and students from the trauma and emotional distress of racism and discrimination? We expect the Board of Regents and President Lassner to take formal action that will protect Hawaiian faculty and students who are subjected to such false statements or other forms of racism.

In keeping with the peaceful actions espoused by the philosophy and practice of Kapu Aloha, the Mauna Kea Protectors at the University of Hawai’i encourage everyone to contact the Board of Regents and President Lassner to stop the violent and racist acts against Hawaiians at the University. Remain in kapu aloha, be organized, be disciplined, and speak truth. Racist acts have no place at our University and in our community.

Here is the full statement made by President Lassner regarding the news release by Mauna Kea Protectors at UH:

UH has clear policy that prohibits “any work related or workplace violence against its students, faculty, staff, visitors and contract employees which materially and substantially interferes with an individual’s work, academic performance, and/or workplace safety and/or otherwise subjectively and objectively creates a hostile environment. Such prohibited violent acts may involve physical attack, property damage, as well as written or verbal statements or non-verbal gestures that, to a reasonable person, express or suggest the intent to cause physical or mental harm to another person”.

I have directed that the responsible officials at UH review the materials provided to assess appropriate next steps under applicable UH policies and procedures.

At the time of the email exchange noted, I issued a message directly to the entire list that concluded: “It is my deepest hope that we can all find ways to learn from what is happening today to become a stronger community of learners, teachers and scholars. We donʻt all need to agree. But we all benefit when we commit to civility and respect for one another, especially those with whom we disagree.”

President Lassner also made this statement on Kamehameha Schools: