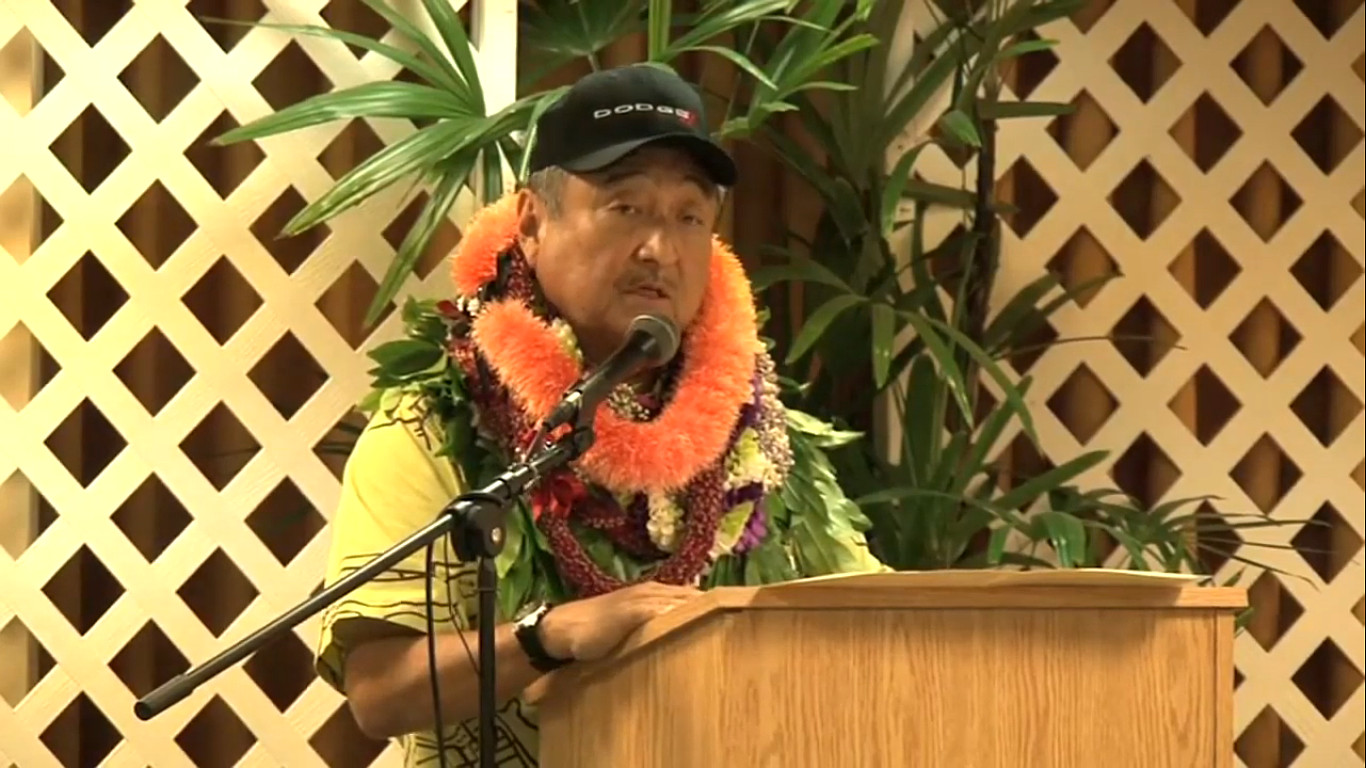 image of Barry Taniguchi from video recorded in 2015, when he was honored by the YWCA as a Remarkable Person

HILO, Hawaiʻi - U.S. Senator Brian Schatz and State Senator Kai Kahele comment of the passing of Taniguchi, who was considered a pillar of the Hawaiʻi Island community.

(BIVN) – Barry Taniguchi, the CEO of KTA Super Stores and a perennial servant on various business and community boards, has died at the age of 72.

Taniguchi passed away Friday at the Queen’s Medical Center on Oahu, due to medical complications, family told media.

State Senator Kaiali‘i Kahele, who in the past has held talks story sessions outside KTA Puainako, issued this statement:

I am shocked and deeply saddened by the sudden passing of Barry K. Taniguchi. My wife Maria, our daughters and our family send our deepest condolences to his wife Sandra, his children and his immediate family. Barry was a pillar of the Hawaiʻi Island business community and an inspiring leader of our charitable causes.

Barry K. Taniguchi was the President and CEO of KTA Super Stores. He was involved with numerous service organizations throughout the State of Hawaiʻi, including the Hilo Medical Center, the Hawai‘i Island Foodbank, the Pacific Tsunami Museum, the Public Schools of Hawaiʻi Foundation and the University of Hawai‘i, Hilo. His passion to give back to the community was immeasurable. His enduring legacy will be felt in these islands for many generations to come.

As someone who had the honor of being his friend, Barry taught me what it meant to live the value of: “You are someone special every day at KTA.” He made everyone around him, including his friends and customers, feel special. He was a true embodiment of aloha.

Mahalo, Barry. You will be greatly missed.

“Barry Taniguchi was a brilliant problem solver and man of action. He was a model businessman and citizen who gave himself fully to the betterment of the Big Island and the State of Hawai‘i.

“My thoughts are with the Taniguchi family during this difficult time. We will greatly miss his intellect, his gentleman’s style, and his determination to always do the right thing.”

Taniguchi is survived by his wife, Sandra, and his children Tracy, Toby, Terri, Amanda and Ryan.

UPDATE (Sunday at 5 p.m. HST) – Saying that Barry Taniguchi “truly exemplified what community means:, the University of Hawaiʻi issued this statement on Sunday:

Hawaiʻi lost a true giant and a pillar of our community with the passing of Barry Taniguchi last Friday. The successful leader of KTA Superstores, a thriving Hawaiʻi Island institution, Barry cared deeply for his community and the entire state of Hawaiʻi. He was passionate about giving back and showed it through decades of dedication and service to numerous community organizations, for which he was widely recognized.

Barry was a strong supporter of the University of Hawaiʻi at Hilo, Hawaiʻi Community College and the entire university system to which he provided farsighted contributions of time, talent and resources. He established the Taniguchi Memorial Fund in memory of his grandparents who founded KTA, and he endowed UH Hilo’s first permanent faculty endowments to help the campus attract and retain the best teachers and scholars. Demonstrating his aloha for youth programs and for athletics, this year, KTA launched its Score for Scholarships program to benefit UH Hilo student athletes.

Barry was a strong believer in and proponent of astronomy on Hawaiʻi Island and a driving force behind UH Hilo’s Mauna Kea Management Board since its formation in 2000.

UH President David Lassner expressed “Our deepest condolences to his family, friends and to all who were touched by his wisdom, his service, his generosity and his kind heart. He always looked forward and the entire UH ʻohana will be forever grateful for the leadership, vision and steadfast support he invested in making a better Hawaiʻi for all. Barry Taniguchi truly exemplified what community means and will be sorely missed.”