HILO, Hawaiʻi - On Wednesday, the University of Hawaiʻi Board of Regents will consider a Maunakea stewardship resolution, but UH's Mauna Kea Management Board is not happy with the proposal. 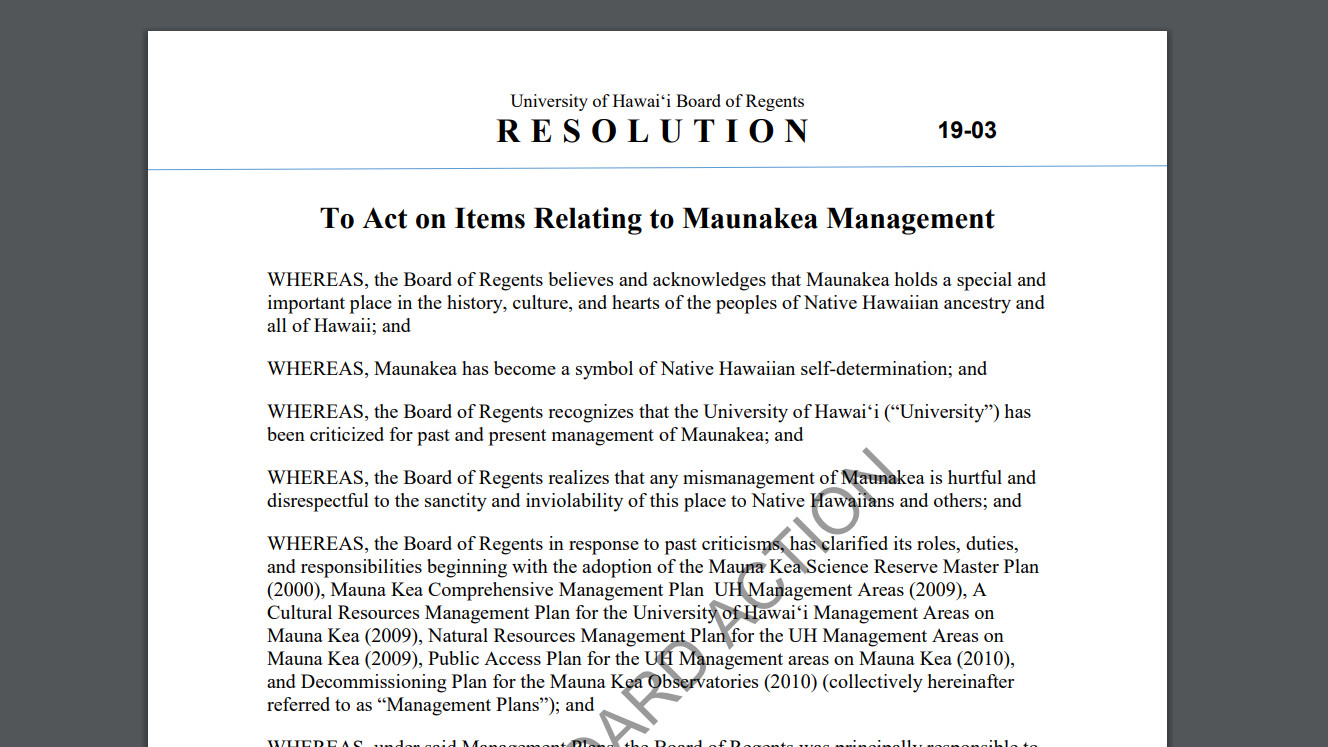 (BIVN) – The Mauna Kea Management Board does not want the University of Hawaiʻi Board of Regents to adopt a proposed Maunakea stewardship resolution when it meets in Hilo in two days.

The Regents will meet on the UH-Hilo campus on Wednesday. The stewardship resolution is on the agenda. The Regents will also consider new administrative rules for UH-managed lands on Mauna Kea. A public hearing will be held on all matters.

On Monday, the Mauna Kea Management Board heard from the public and then talked over the resolution, which could lead to reorganizing and restructuring UH management of the mountain.

“Obviously this resolution has caused some consternation, personal, as well as on the board, with regards to how it came to be without consultation by entities that should have been consulted,” said board member Julie Leialoha. “I can somewhat understand why the Board of Regents wanted to move forward the way they wanted to, but I honestly feel that this – if accepted as written – will cause a lot of complications.”

“My other thing was the fact that the legal documents, particularly the decommission plan, that’s the legal status document. The reso overrides that,” Leialoha added. “it seems to supersede it. With no mention of TMT being built or not being built. So, the comments that we intend to put forth are not an agreement with the resolution.”

“The development of this resolution without consultation of the Mauna Kea Management Board, Kahu Kū Mauna, and numerous other on-island stakeholders and individuals is inconsistent with the commitment by the Board of Regents to the principle of community based management, and this will be articulated in our comments to the Regents on Wednesday,” said board chair Roberta Chu. “We feel very strongly that it needs to be community based. It cannot be made up of primarily Oʻahu people, because it is clear that there have been a lot of additional issues, maybe unintended, but consequences that have not helped the situation.”

Shane Palacat-Nelsen said Kahu Kū Mauna is not in support of the resolution, either.

Nelsen said Kahu Kū Mauna members felt the proposed resolution was a “downright irresponsible move. Honestly, that’s kind of what we’re saying in our in our testimony, actually. We’re being blunt about it,” he said.

The Regents resolution is also not supported by the Maunakea Observatories, said board member Doug Simons, Executive Director of the Canada-France-Hawai‘i Telescope.

“Our biggest concern arguably is the apparent lack of any coupling between the removal of five telescopes with the advancement of TMT. TMT’s in a completely uncertain state right now. And the five telescopes that are required to be pulled off the mountain through the decommissioning process were explicitly put in the TMT permit as a mitigation package. And failure, if TMT doesn’t go forward, we have a lot of concern about the removal of those five telescopes. Its basically a fait accompli, as a result of this reso. An explicit statement in the reso, tying the five telescopes to TMT going forward, would certainly help alleviate our worries about an expectation being set in the community; that now we have five telescopes, no matter what, coming off the mountain, whether or not TMT goes forward or not. Our position is that if TMT does not go forward, we fall back to the sub-plan for decommissioning built in the CMP, which calls in net for removal of three telescopes. We’d also like to see a process that is set in place – collaboratively, with the community – to figure out how to do that and which telescopes are involved, per say.”

“I really do have an issue with the fact that the meeting is being held on Wednesday for approval of the resolution only after learning of this in less than a week,” said Julie Leialoha.

The Mauna Kea Management Board voted to send testimony asking the Regents to defer making a decision on the stewardship resolution, and to keep the Maunakea Governance Permitted Interaction Group in place in the meantime.