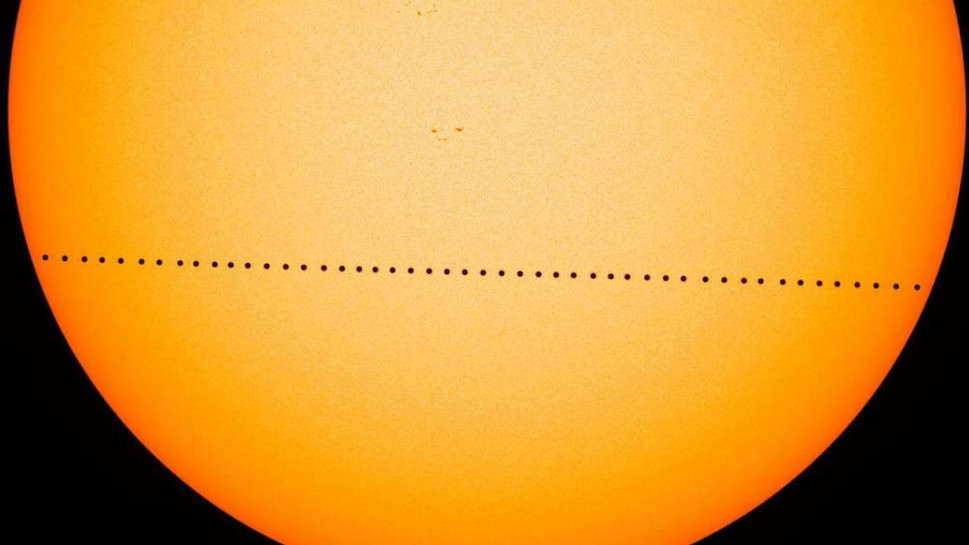 When Mercury passes directly between the sun and Earth, the event is called a transit. This composite image of Mercury’s journey across the sun was created with visible-light images from the Helioseismic and Magnetic Imager on NASA’s Solar Dynamics Observatory (SDO), which studies the sun 24/7. Image Credit: NASA’s Goddard Space Flight Center / SDO / Genna Duberstein

The Maunakea Observatories recorded video of both viewing parties and shared this information:

It’s an astronomical phenomenon that won’t be visible from Hawaii again for another 30 years; on Monday, November 11, communities across the Big Island of Hawaii made sure to catch the rare event at Mercury Transit Viewing parties hosted by two Maunakea Observatories: W. M. Keck Observatory and Subaru Telescope.

In Waimea, more than 100 people gathered at Keck Observatory’s headquarters to view the smallest planet in our solar system pass directly between the Earth and the Sun.

“We’re excited to share this rare transit of Mercury with our community,” said Shelly Pelfrey, outreach coordinator at Keck Observatory. “Looking at Mercury against the bright surface of the Sun without proper protection is dangerous and can cause eye damage. Since we have telescopes with solar filters, we wanted to bring them out for our community so they can safely enjoy this amazing show that the universe is putting on for us.”

Keck Observatory astronomers and staff, along with members of the West Hawaii Astronomy Club, started the party bright and early at 6:00 a.m. with a live feed of the beginning of the transit inside the Jerry Nelson Conference Room. At around 7:00 a.m., when the sun rose high enough to view, everyone gathered outside and took turns observing Mercury through telescopes setup in various parts of the parking lot.

About 55 miles away, over 200 people came out to Subaru Telescope in Hilo, including about 30 students majoring in natural science at UH Manoa who flew in from Oahu, to to see Mercury block a tiny part of the light from the Sun through solar telescopes.

The free, family-friendly event featured a live connection to other observation sites, including PANOPTES (Panoptic Astronomical Networked Observatories for a Public Transiting Exoplanets Survey) cameras on Mauna Loa, in California and Boston, as well as the Big Bear Solar Observatory in California, the largest solar telescope in operation, which ran adaptive optics imaging to obtain sharp, high-resolution photos of Mercury’s transit.

“The weather was perfect for viewing Mercury this morning. We had a clear view of the Sun rising over the ocean,” said Olivier Guyon, an astronomer at Subaru Telescope. “A large crowd had gathered for sunrise. Soon after, Mercury became visible, getting progressively sharper as the Sun rose higher. It was an amazing experience to see Mercury as a small disk in the telescope eyepiece, then catch a live view from the Big Bear Solar Observatory taking the sharpest image of the transit.

The community also enjoyed hands-on activities such as an experience inside a StarLab portable planetarium, demonstrations, and presentations for all ages at Subaru Telescope’s Mercury Transit Viewing party, a joint event hosted in partnership with the East Asian Observatory, Gemini Observatory, University of Hawaii (UH) Institute for Astronomy in Hilo, and the UH Hilo Astrophysics Club.

On Oahu, UH Institute for Astronomy held a similar event at Waialae Beach Park, which drew a crowd of about 200 people.

Mercury is the fastest planet in the Solar System, whizzing around the Sun every 88 days and passing between the Earth and Sun every 116 days. Because Mercury’s orbit is tilted compared to Earth’s orbit around the Sun, the tiny planetary speedster is normally outside our line of sight, passing above or below the Sun. A transit is only visible to us when Mercury crosses Earth’s orbital plane as it appears in line with the Sun, which happens just 13-14 times per century.

Today’s Mercury transit is only the fourth in this century. The next one will be visible from Earth in November 2032, but North America and Hawaii will have to wait until the 2049 transit to see this phenomenon again from their part of the globe