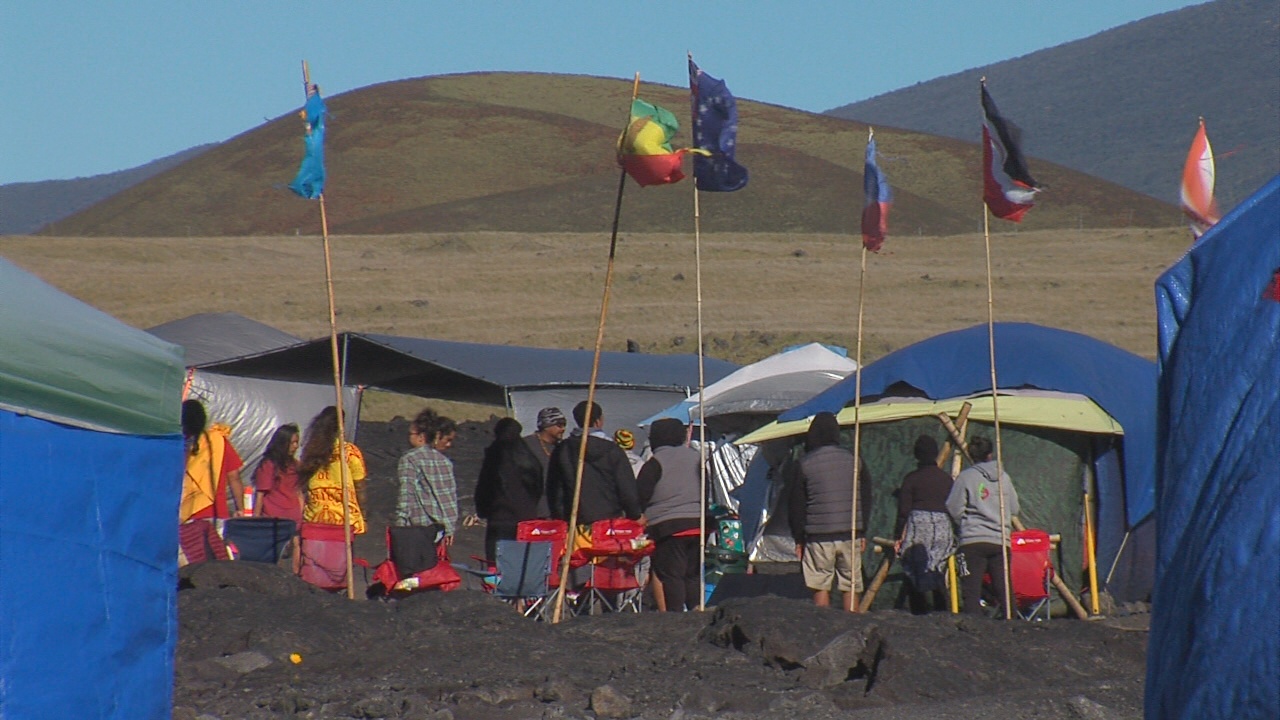 HONOLULU - Attorneys representing some of the kūpuna arrested on the Mauna Kea Access Road in July 2019 reveal their plans to fight prosecution.

(BIVN) – Attorneys representing some of the kūpuna arrested on the Mauna Kea Access Road in opposition to the Thirty Meter Telescope plan to fight obstruction charges on grounds that are related to the occupation of the Hawaiian Kingdom.

This past Monday defense lawyers Dexter Kaiama and Stephen Laudig filed their response to the State of Hawai‘i Attorney General’s opposition to their clients’ motion to dismiss. They argued that the Attorney General “cannot be allowed to knowingly and with intent benefit from the ‘war crime’ of usurpation of sovereignty that consists in the ‘imposition of legislation or administrative measures by the occupying power,’ which, in effect, leads to the violation of international law by denying a Protected Person of the right to a fair and regular trial by a properly constituted court. The prohibition of ‘war crimes’ is a jus cogens norm under customary international law and neither the [Attorney General] nor this Court can derogate from these peremptory norms.”

After state law enforcement officers arrested 39 Kia‘i Mauna (protectors of the mountain) who were opposing the building of the Thirty-Meter Telescope (TMT) on Mauna Kea on July 17, 2019, the Attorney General filed charges of obstruction in the Hilo District Court. On behalf of the 8 defendants, Kaiama and Laudig filed their motions to dismiss on November 13, 2019, which provided clear and unequivocal evidence that because the Hawaiian Kingdom continues to exist under international law the District Court “is not a regularly constituted court” and therefore does not have lawful jurisdiction to preside over the case.

An opposition to the motion to dismiss was filed by the Attorney General on December 6, 2019. In its opposition, the Attorney General provided no counter evidence of the Hawaiian Kingdom’s existence and that the Hawaiian Islands have never been lawfully a part of the United States. Instead, the Attorney General argues three points as to why Judge Kanani Lauback should deny defendants’ motion to dismiss. The first argument is that the political question doctrine prevents courts from adjudicating the legality of the overthrow of the Hawaiian Kingdom and the validity of the State of Hawai‘i. Second, the legal status of the State of Hawai‘i has been adjudicated. And, third, international law does not override acts of Congress.

On December 9, Kaiama and Laudig filed a reply that starts off by stating that the Attorney General’s “statement of relevant facts violates the principle of jus cogens and is not relevant to the Court’s consideration of the instant motion.” Jus cogens is a legal term that federal courts say “enjoy[s] the highest status within international law,” and as such cannot be denigrated. International crimes, which includes war crimes, are jus cogens norms.

In its reply, the defense pointed out that the unlawful imposition of United States laws and administrative policies constitute a war crime under customary international law. For their evidence, the defense cited a legal opinion written by Professor William Schabas, a leading expert in international criminal law and war crimes, titled Legal opinion on war crimes related to the United States occupation of the Hawaiian Kingdom since 17 January 1893 (link). The defense argues that all “three fit squarely within the provisions of United States internal law – being legislation and administrative rules, which customary international law precludes a State from invoking as justification for its failure to comply with Article 43 of the Hague Regulations.” Article 43 of the Hague Regulation is a ratified treaty by the United States that obligates an Occupying State to administer the laws of the Occupied State. In this case the Occupying State is the United States and the Occupied States is the Hawaiian Kingdom.

A hearing on the motion to dismiss is scheduled for 8:30am on Friday, December 13, 2019, at the Hilo District Court