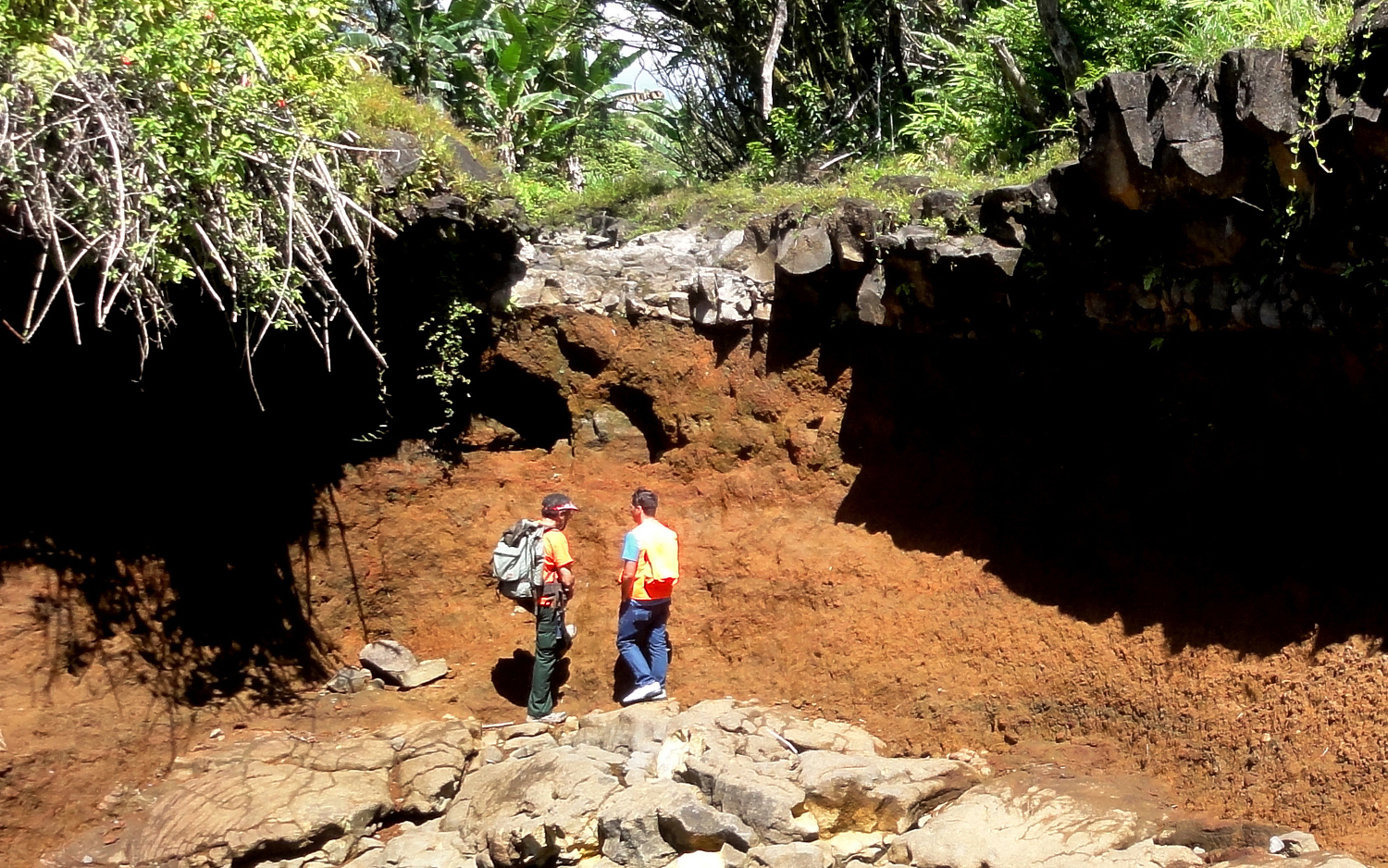 USGS Hawaiian Volcano Observatory scientists examine an outcrop of reddish-brown Hilo ash during a recent study to investigate the origins of volcanic ash deposits on the Island of Hawai‘i. Age dates of lava flows above and below the Hilo ash deposit indicate that the ash was erupted between 3,000 and 14,000 years ago. (USGS photo by Z. Tamashiro.)

HAWAIʻI ISLAND - Scientists are seeking to learn which volcano produced which ash deposits from past explosive eruptions.

The origin(s) of volcanic ash deposits on the Island of Hawai‘i have been an enigma, especially those found on and between Kīlauea and Mauna Loa. We know that ash is from explosive eruptions, but the question has been “from which volcano?”

Previous workers concluded that the most probable source of the ash was Mokuʻāweoweo, the summit caldera of Mauna Loa. Others suggested that the ash came from the vicinity of Pu‘u Iki north of Hilea, mauka (upslope) of Punalu‘u Bay in Ka‘ū. More recent work has shown that some of these deposits are from Kīlauea.

The age and origin of ash deposits on Mauna Loa’s southeast flank still need to be determined. Based on recent geologic mapping of Mauna Loa (Sheet 2), explosive eruptions that produced the ash date back to at least 49,000 years.

The ash deposits also vary in thickness from 0.10 m to 5.5 m (0.1 ft to 18 ft). Their consistencies range from friable (crumbly) to indurated (solid). Hilo ash is soft and mud-like, while Pāhala outcrops consist of dry layers of ash with varying degrees of consolidation. In the Kalae region, ash layers are so thin, it was difficult to avoid cross-contamination between them when collecting samples.

Ash samples were collected in the field for geochemical analyses to determine the volcanic source of the deposits. Pressed pellets of ash were carefully prepared and then analyzed using an energy-dispersive X-ray fluorescence (ED-XRF) instrument at the University of Hawaiʻi at Hilo. For quality control, a USGS basalt standard BHVO-2 was analyzed.

Weathering of ash outcrops also varies. The degree of alteration was determined by sodium content in the ash samples because that element is easily weathered from the deposits. In areas with higher rainfall amounts, ash is subject to more intense weathering. So, Hilo samples had less sodium compared to ash from the drier Pāhala and Kalae areas. However, some Kalae samples have excess sodium, most likely from seawater spray.

Where Hawaiian volcanoes are located relative to the hotspot beneath the Island of Hawaiʻi result in distinct geochemical trends. Hualālai, Mauna Loa, and Lōʻihi are on what is referred to as the “LOA trend,” whereas Kohala, Mauna Kea, and Kīlauea are on the “KEA trend.” Volcanoes on the same trend have similar magma chemistry that differs from the chemistry of the other trend.

Using the ED-XRF geochemical data, Tamashiro and his HVO mentor determined the chemical trend from which the ash deposits were erupted. Although their study is far from comprehensive, they discovered that the chemistry of ash samples from Pāhala is comparable to Kīlauea or Mauna Kea (KEA trend). Kalae ash has a more complex history, with some samples suggesting an origin from Kīlauea or Mauna Kea, but others suggesting they were probably erupted from Mauna Loa or Hualālai (both KEA and LOA chemical affinities). Hilo ash deposits are too altered to reliably indicate magmatic origin.

HVO is just beginning to scratch the surface on the origin of Hawaiʻi Island’s ash deposits, with much work still to be done. Analyzing chemical compositions of the ash was useful to the ongoing research, and we greatly appreciate Tamashiro’s contributions to the study while interning at HVO. With continued investigations, we hope to shed additional light on the origin of ash deposits on the flanks of Mauna Loa.