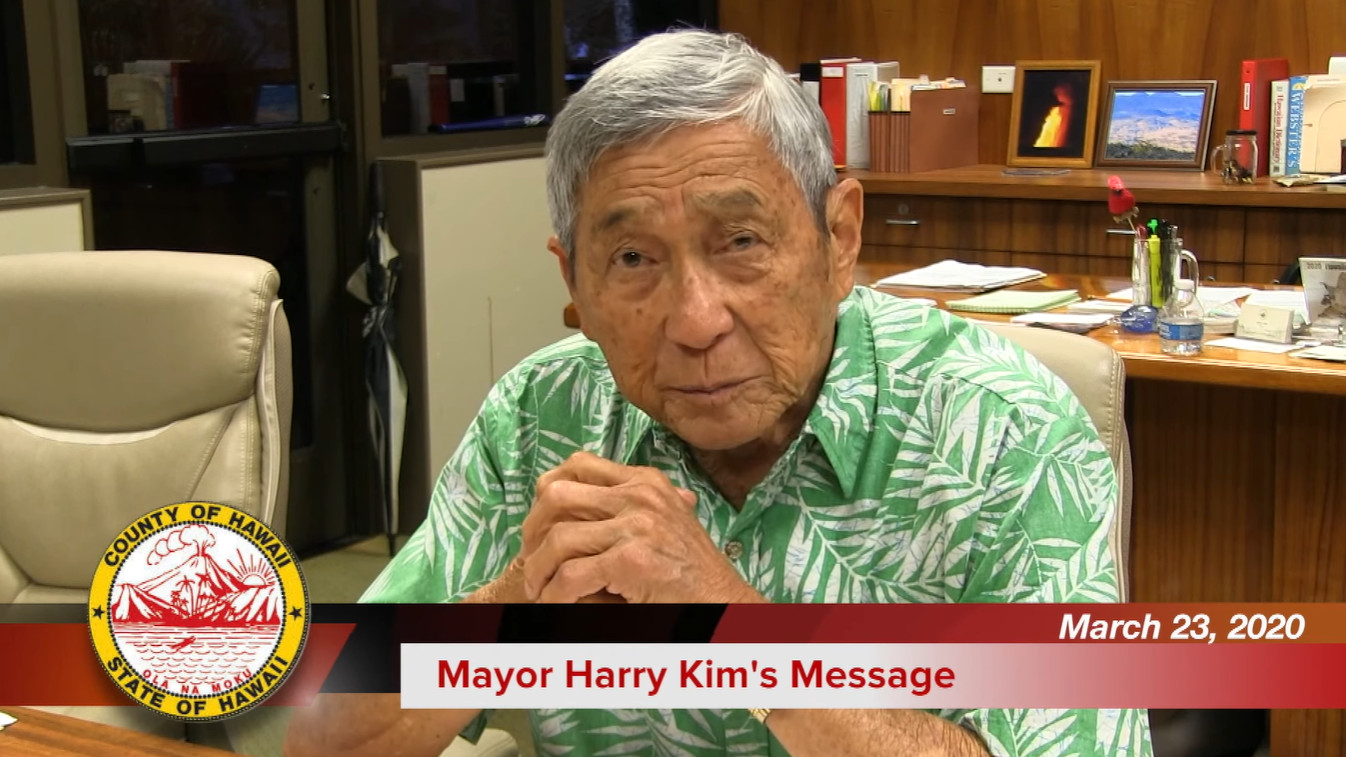 image from video by the Hawaiʻi County Mayor on Youtube.

Mostly, the new order suspends meetings and hearing on the Big Island, and also suspends permit deadlines and automatic approvals.

The Hawaiʻi County Council is still set to hold its meeting tomorrow in Hilo. “Pursuant to Governor Ige’s supplementary emergency proclamation
dated March 16, 2020, in order to minimize physical contact and maximize
social distancing, this meeting will not be open to the public,” the council agenda declares.

WHEREAS, on March 4, 2020, the Governor of the State of Hawai‘i issued a Proclamation declaring a state of emergency based upon the actions and directives of the President of the United States, the World Health Organization, the United States Centers for Disease Control and Prevention, and current conditions warranting preemptive and protective actions related to the outbreak of COVID-19 virus; and

WHEREAS, on March 11, 2020, the Mayor of the County of Hawai‘i issued the Supplementary Emergency Proclamation issuing further orders for response to COVID-19; and

WHEREAS, on March 16, 2020, the Governor of the State of Hawai‘i issued the Supplementary Proclamation further suspending State laws that impeded the state-wide response to COVID-19; and

WHEREAS, on March 21, 2020, the Governor of the State of Hawai‘i issued the Second Supplementary Proclamation issuing an Order that all persons coming into the State of Hawai‘! shall be subject to a period of self-quarantine; and

WHEREAS, on March 23, 2020, the Governor of the State of Hawai‘i issued the Third Supplementary Proclamation issuing an Order stating “All persons in the State Must Stay at Home or in Their Place of Residence” with exceptions for essential business or operations; and

WHEREAS, due to the possibility of imminent emergency or disaster due to bodily injury to residents of Hawai‘i Island, and the need for government agencies and representatives from the private sector to mobilize and provide financial and other immediate services to our island residents, a state of emergency is authorized pursuant to Chapter 127A Hawai‘i Revised Statutes, and Chapter 7, Hawai‘1 County Code; and

WHEREAS, Section 127A-13(b)(1) Hawai‘i Revised Statutes provides that during a state of emergency the Mayor may relieve hardship and inequities or obstruction to public health, safety or welfare found by the Mayor to exist in the laws of the county and to result from the operations of federal programs or measures, may suspend county laws in whole or in part; and

WHEREAS, the Charter and County Code requirements to hold Board and Commission meetings, or other types of meetings, should be suspended to avoid large gatherings of people; and

WHEREAS, strict adherence to County Code imposed deadlines may impose a hardship and inequity to the public;

NOW, THEREFORE, I, HARRY KIM, Mayor of the County of Hawai‘i, do hereby proclaim and declare that a state of emergency exists due to the imminent danger or threat of emergency on the Hawai‘i Island and hereby authorize and invoke the following measures under Section 127A-13(b)(1) Hawai‘i Revised Statutes, as amended:

the following shall be suspended during this state of emergency:

(1) Meetings and Hearings.
Meetings or hearings, including contested case hearings, conducted by boards and commissions established under the Charter of the Hawat‘i County Code are suspended, provided that meetings or hearings may be conducted to the extent the Governor of the State of Hawai‘i has suspended the requirements of Chapters 91 (administrative procedures) and 92 (public agency meetings and records), HRS, and sufficient capability exists to conduct such meetings or hearings by telephone or video conference as determined by the County department providing administrative assistance to the board or commission.

(2) Permit Deadlines and Automatic Approvals.
Any deadline or automatic approval imposed by the Hawai‘i County Code or an administrative rule of any County department, officer, board, committees, and/or commissions is hereby continued to the latter of the following: 60 days after the date of this Second Supplementary Emergency Proclamation, dated March 24, 2020, as may be extended; or 60 days from the date of the current deadline or automatic approval date. This suspension does not extend the time to perform any permit condition of an existing permit that has already been approved.

IN WITNESS WHEREOEF, I have hereunto set my hand and caused the Seal of the County of Hawai‘i to be affixed. Done this 24th day of March, 2020, in Hilo, Hawai‘i.