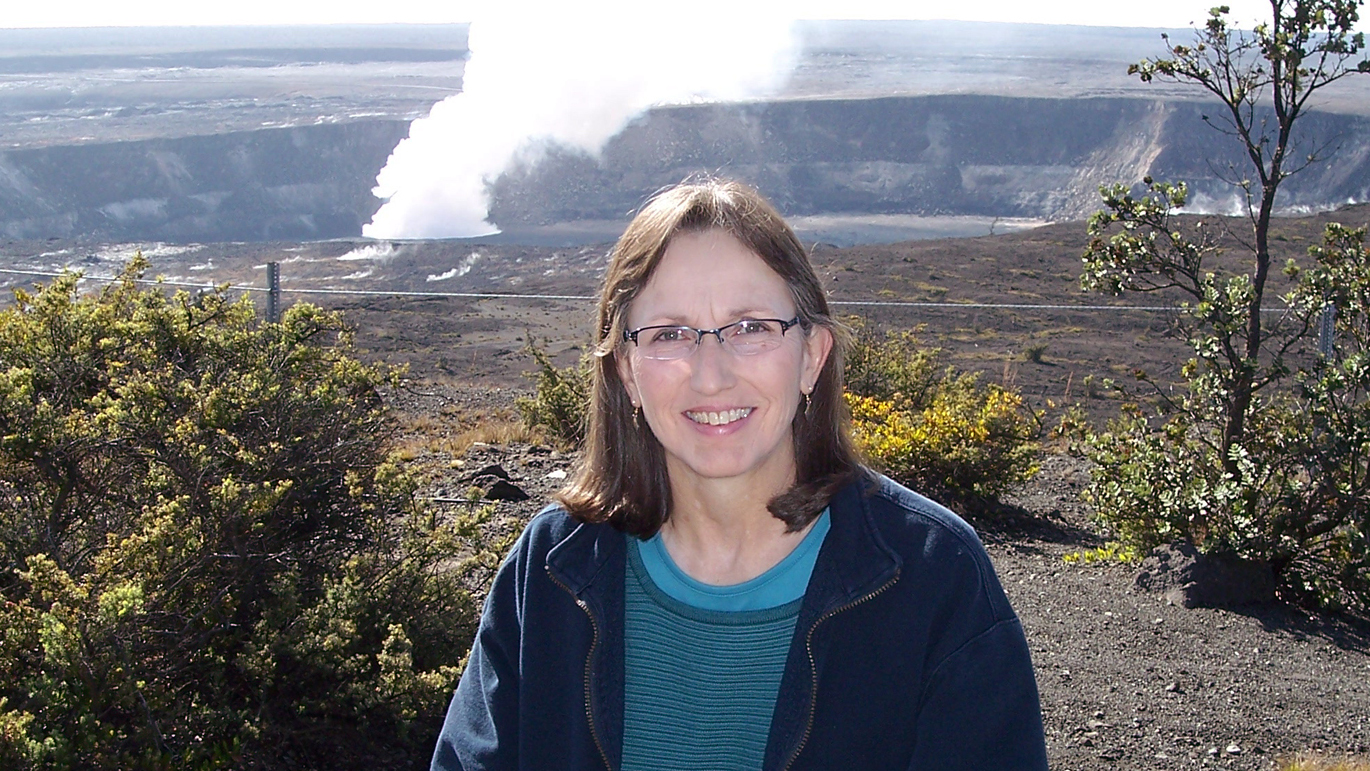 The degassing lava lake within Halema‘uma‘u at the summit of Kīlauea was a fitting backdrop in 2009 for USGS Hawaiian Volcano Observatory geologist Janet Babb, who later co-produced a video about the summit eruption. The lava lake drained away in 2018 as the summit crater collapsed, but the video - USGS General Information Product 182 - can still be viewed online. Babb recently retired from HVO. USGS photo.

Janet Babb speaks to national and local media in November 2014 during the “June 27th” lava flow that threatened the town of Pāhoa. Video by David Corrigan.

Babb served as a primary point of contact for media during much of the 35-year eruption of Kīlauea.

Here is the entire Volcano Watch article written in honor of her service:

With heavy heart, the USGS Hawaiian Volcano Observatory (HVO) bids aloha to Janet Babb, outreach geologist and educator extraordinaire who retired from federal service in late March. Because of her dedication and guidance over the years, HVO is well-positioned to carry on a tradition of quality media and public engagement.

Janet’s love for volcanoes and Hawaiʻi have been evident in everything she’s done since first coming to the island in 1990. Her previous work as an elementary school teacher, University of Hawaiʻi at Hilo geology lecturer, Hawaiʻi Volcano Geoventures owner and guide, and Hawaiʻi Volcanoes National Park interpretive exhibits specialist set the stage for great accomplishments at HVO.

Awards for Janet’s professional work started long before her arrival at HVO. In 2001, she received the Hawaiʻi Visitors and Convention Bureau’s “Keep it Hawaiʻi” Kahili Award for her contributions to public education about Hawaiian volcanoes through Project LAVA (Learning About Volcanic Activity), a week-long teacher workshop that she developed and coordinated from 1995 through 2002.

Janet volunteered at HVO for many years before being hired in 2008 to help the Observatory manage public information during Kīlauea’s first summit eruption since 1982. The appearance of the lava lake in Halema‘uma‘u made local, national, and international news, and HVO needed someone knowledgeable in Hawaiian volcanology and geologic history to handle the multitude of media requests. Then Deputy Scientist-in-Charge Steve Brantley suggested that Janet fill that role, a challenge she accepted, initially as a volunteer and later as a permanent USGS employee.

News coverage of Hawaiian volcanoes had been handled directly by HVO leaders and scientists since the observatory’s founding in 1912. But with the advent of 21st century around-the-clock news cycles and internet-based radio, television, and social media, HVO needed help. Already hard-pressed in 2008 to keep up with media interest in the continuing Puʻu ʻŌʻō eruption, the onset of Kīlauea’s summit lava lake only ramped up the pressure.

As the first person to formally occupy such a role explicitly at HVO, Janet defined the niche by creating and sharing protocols to guide HVO scientists during interviews and public presentations. With the greater good of Hawaiʻi communities and HVO always in mind, she sought better and more creative ways to share HVO messages about Hawaiian volcanoes and earthquakes.

One of her most successful endeavors began in 2010, when she convinced Hawaiʻi County to proclaim January as “Volcano Awareness Month.” From then through 2020, she organized a month-long series of public programs—talks, hikes, poster sessions, and other means of community interaction—each January, with HVO staff and affiliates providing the presentations. Over the years, Volcano Awareness Month has done much to prepare island residents for future volcanic eruptions and to share HVO scientists’ passion for their work.

Aware that many people could not get close to lava flows in hazardous closed areas, Janet worked with her counterparts at Hawaiʻi Volcanoes National Park and Hawaiʻi County Civil Defense to organize special media events to help bring the inside story of Kīlauea eruptions to the world. She also kept HVO’s award-winning “Volcano Watch” essay series alive, editing weekly submissions and encouraging staff to keep writing articles about volcanoes and earthquakes.

When Kīlauea’s summit lava lake became a mesmerizing center of attention in Hawaiʻi, Janet conceived of and co-produced a 24-minute video that incorporated stunning visuals and informative commentary by HVO scientists, as well as the geologic history and cultural context of Halema‘uma‘u. The award-winning video stands as a reminder of what once existed at the summit of Kīlauea.

Then came 2018. Janet handled the initial unprecedented media onslaught and then worked with communication professionals from other USGS offices throughout the summer to provide a steady stream of information about Kīlauea’s lower East Rift Zone eruption and summit collapses to media outlets near and far. In the aftermath, Janet recorded HVO staff recounting their experiences during the 2018 events, video footage that now awaits thoughtful weave into the eruption story of our generation — another example of the creative communicator that she is.

HVO will deeply miss Janet as a colleague and friend. Her passion, talents, and dedication helped us all to be better communicators. HVO is proud to have had her represent us to our island communities and the world, and we wish her all the best in retirement.