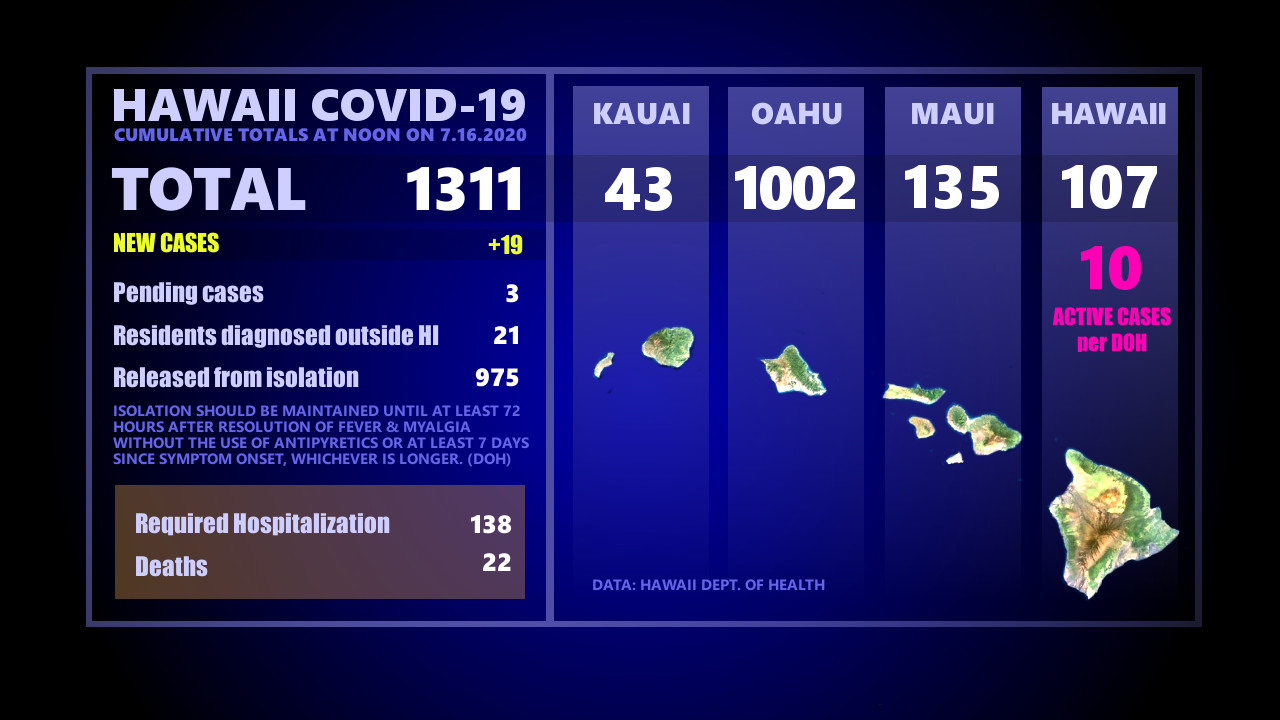 HAWAIʻI - There were 19 newly reported cases of COVID-19 in the State of Hawaiʻi as of noon on Thursday, officials say.

Sixteen (16) of the new cases were reported on Oʻahu, bringing the cumulative total number of cases on that island over the one-thousand mark with 1,002. More information on three (3) other cases is pending, the State says.

There are no new cases reported on Hawaiʻi island, where 97 of the cumulative 107 cases have been released from isolation, according to the Hawaiʻi Department of Health. Testing is being conducted today at Kona Community Hospital, after three (3) active cases were recently identified at the facility.

Today marks 16 weeks since the State’s mandatory 14-day self-quarantine started for all passengers arriving to Hawaiʻi from out of state, officials say. Governor Ige announced today that he – along with Attorney General Clare Connors and Paul Jones, Deputy Chief Special Agent for the Dept. of the Attorney General Investigations Division – will appear on a Facebook live stream, where they will discuss quarantine enforcement and answer questions.

The Hawai‘i State Senate Special Committee on COVID-19 will also convene today at 2 p.m. to assess and advise the Senate on the re-opening of schools.

Yesterday, 2,287 people arrived in Hawaii. During this same time last year approximately 35,000 passengers arrived in Hawaii daily, including residents and visitors. This table shows the number of people who arrived by air from out of state yesterday and does not include interisland travel. This data was collected from the Hawaii Department of Transportation’s (DOT) Mandatory Travel Declaration Form.

UPDATE – (3 p.m.) – Hawai‘i’s unemployment rate was at 13.9% in June, reported the Department of Labor and Industrial Relations today.

In a media release, DLIR announced:

… the seasonally adjusted unemployment rate for June was 13.9-percent compared to the revised rate of 23.5-percent in May. Statewide, 527,600 were employed and 85,200 unemployed in June for a total seasonally adjusted labor force of 612,800. Nationally, the seasonally adjusted unemployment rate was 11.1-percent in June, down from 13.3-percent in May. DLIR would like to note that the COVID-19 Pandemic is impacting the data derived from the Current Population Survey (CPS), the survey used to produce the unemployment rate, also known as the household survey. In the household survey, individuals are classified as employed, unemployed, or not in the labor force based on questions about their activities during the survey reference week (June 7th through June 13th). COVID-19-related issues are affecting the counts and the official level of unemployment published for the State of Hawai‘i by the Bureau of Labor Statistics (BLS). The major discrepancy, with the exception of those unemployed on temporary layoff, is that individuals without a job who are not actively seeking work, particularly during this time of government-ordered business closures and social distancing requirements, are classified as not in the labor force in the CPS. The CPS misclassification issue of workers who were recorded as “employed but not at work” instead of “unemployed on temporary layoff” is a contributing factor and the low response rate for the CPS during the pandemic is possibly another factor.

The State of Hawaiʻi also issued $2.2 billion in benefits since March 1. DLIR Deputy Director Anne Perreira-Eustaquio said, “91-percent of the valid unemployment insurance claims that have come in since the beginning of the COVID-19 pandemic have been processed and paid out. Although it appears that the number of claims requiring departmental action is stable, we are still receiving nearly 8,000 new claims a week.”