HAWAIʻI - The close passage of Douglas could bring a triple threat of hazards, "including but not limited to damaging winds, flooding rainfall, and dangerously high surf," forecasters say. 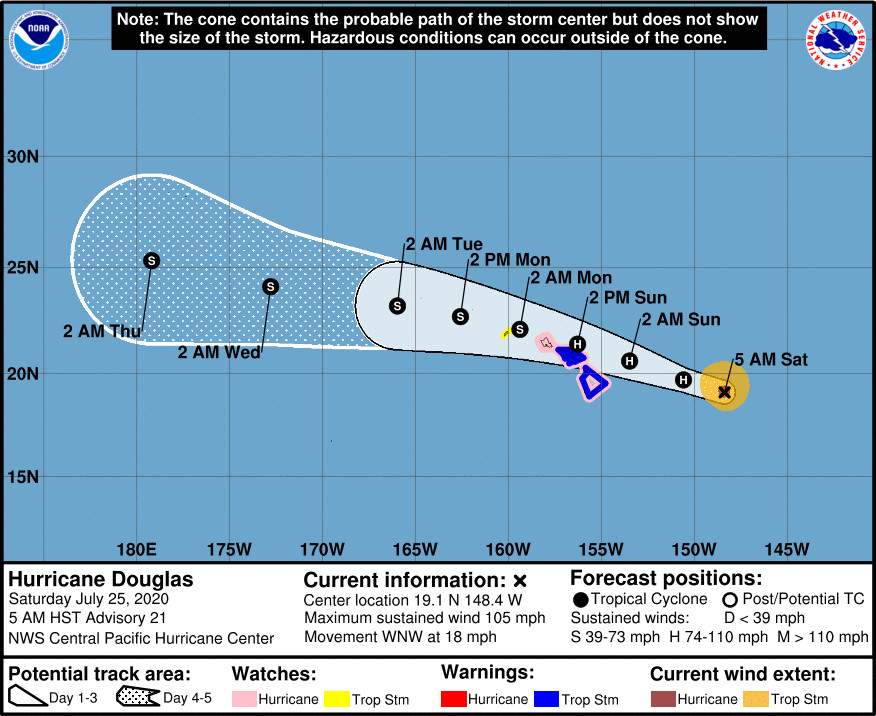 (BIVN) – Hurricane Douglas is 440 miles east of Hilo, and moving west northwest at 18 mph. Douglas will be near the main Hawaiian Islands late tonight through Sunday night.

The National Weather Service says the latest forecast shows Douglas “passing dangerously close to the islands as a category 1 hurricane on the Saffir-Simpson Hurricane Wind Scale. The latest forecast track has the center of Douglas passing just north of Maui, very close to Oahu, then on to Kauai Sunday night.”

“Remember, impacts are realized well away from the center of the storm,” the National Weather Service stated.

A Tropical Storm Warning and a Hurricane Watch is in effect for Hawaiʻi island.

The Big Island is also under a Flash Flood Watch and a High Surf Warning along east-facing shores.

As of 5 a.m. HST, Hurricane Douglas was churning with maximum sustained winds are near 105 mph (165 km/h) with higher gusts. Gradual weakening is expected through the weekend, but forecasters say Douglas is still forecast to be near hurricane strength when it
nears the islands.

“If this forecast holds or even shifts a tad south, impacts will include: strong winds capable of damaging infrastructure, downing trees and causing power outages, heavy rainfall that could lead to flash flooding, and warning-level surf for coastal areas exposed to Douglas moving through,” the National Weather Service wrote. “A combination of the winds, large seas, and higher than predicted water levels could result in coastal flooding issues in the vulnerable low-lying areas due to surge and wave runup.”

From the 5 a.m. HST discussion by the Central Pacific Hurricane Center:

The satellite presentation of Douglas has changed very little since the previous advisory, with the eye remaining cloud filled and difficult to locate with a high degree of certainty. The latest current intensity estimates from the satellite agencies came in at 5.0 (90 knots) from PHFO, 4.5 (77 knots) from JTWC and SAB, while the ADT from UW-CIMSS was 4.6 (80 knots). Based on the U.S. Air Force 53rd Weather Reconnaissance Squadron mission last evening finding maximum flight level winds of 108 knots (97 knots with appropriate wind reduction factor to the surface from the 700 mb flight level) and SFMR winds of 93 knots, we will conservatively lower the initial intensity to 90 knots with this advisory, but that may be generous. Douglas appears to have made a subtle shift toward the west overnight, and the initial motion for this advisory has been set at 290/16 knots.

The tropical cyclone will be going over the coolest sea surface temperatures (SSTs) along its forecast track during the next 12 to 18 hours before SSTs climb back to 26C or above. This should result in continued weakening despite relatively low vertical wind shear. Thereafter, the vertical wind shear slowly becomes less conducive for intensification, while SSTs become less hostile as they rise back to 26/27C or above. We expect that the increasing wind shear will win the battle through the remainder of the forecast track, and show slow and gradual weakening through 120 hours. The official intensity forecast has changed very little from the previous advisory, and generally follows a blend of the corrected consensus and statistical model guidance.

Douglas is forecast to continue to move off to the west-northwest today toward a weakness in the sub-tropical ridge north of the Hawaiian Islands, with a slight reduction in forward speed. The subtropical ridge is forecast to strengthen north of the state tonight through the remainder of the weekend and this should steer the tropical cyclone slightly more westward, and over or very near the Hawaiian Islands late tonight through Sunday night. Douglas is then expected to exit to the west of the island chain early next week. The official track forecast is virtually identical to the previous advisory, and continues to hug the southern end of the guidance envelope. This track is roughly in the middle of the deterministic GFS/ECMWF solutions and the GFS/ECMWF ensemble means, which is very close to the corrected consensus guidance HCCA.

1. Douglas continues to approach the main Hawaiian Islands, potentially passing dangerously close to, or over, the islands late tonight through Sunday night. The close passage of Douglas brings a triple threat of hazards, including but not limited to damaging winds, flooding rainfall, and dangerously high surf, especially along east facing shores.