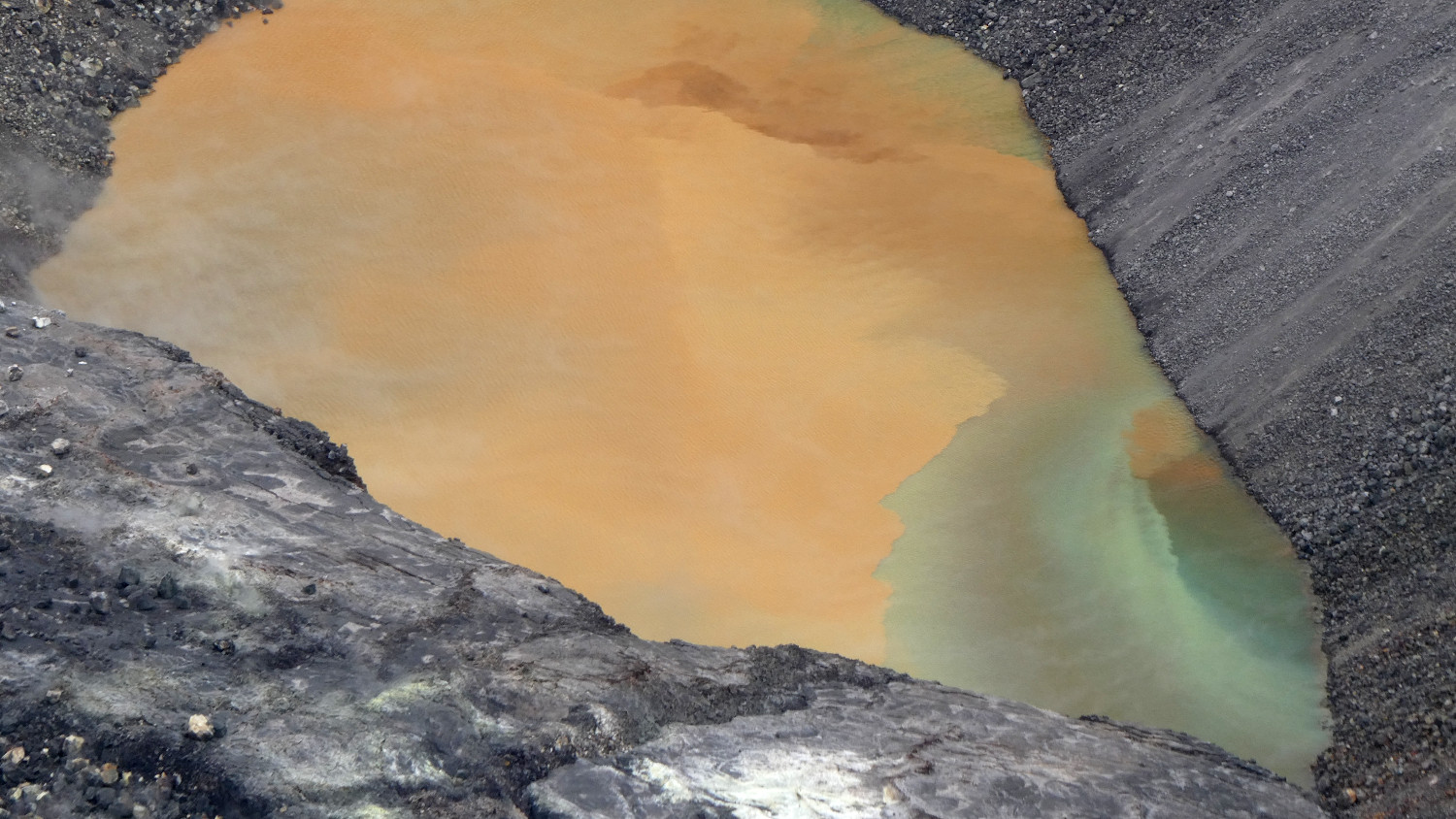 Kīlauea's summit water lake, in Halema‘uma‘u, continues to slowly rise. Today, the lake colors were vibrant, with a zone of aquamarine water in the west end (lower right in photo). These greenish zones tend to be slightly hotter, and appear to be zones of water influx. USGS photo by M. Patrick.

HAWAIʻI VOLCANOES NATIONAL PARK - Water was first observed at the summit of Kīlauea Volcano one year ago, scientists recount. The new body of water has slowly deepened and grown in size in the time since.

(USGS photos/caption) Comparison of images showing growth of Kīlauea’s summit water lake over the past year. The left image, taken on August 2, 2019, shows a small green pond that was approximately 6 ft (2 m) deep. The right image, taken on July 21, 2020, shows a lake more than 130 ft (40 m) deep with shades of tan to brown and a sharp color boundary often cutting across the lake. Hawaiian Volcano Observatory scientists continue to monitor the lake, and Kīlauea’s summit.

On July 25, 2019, ponded water was first observed within Halema‘uma‘u at the summit of Kīlauea Volcano. Over the past twelve months, the USGS Hawaiian Volcano Observatory (HVO) has watched this amazing body of water grow from a nascent pond into a veritable lake, the first observed within Kīlauea caldera in at least 200 years.

HVO closely monitors the lake using a variety of methods, many of which you can check yourself on the HVO website. Visual and thermal cameras track the lake’s surface color and temperature. Color is variable and the lake surface temperature is hot, consistently around 158–185 degrees Fahrenheit (70–85 Celsius). Laser rangefinder measurements track the surface level, which has risen steadily by about 2.5 ft (0.75 m) each week. And two dedicated water-sampling missions have been flown using unoccupied aircraft systems.

Crater lakes occur at volcanoes around the world, but very few of those crater lakes occur at basaltic volcanoes like Kīlauea. Halema‘uma‘u, which collapsed and deepened during Kīlauea’s 2018 eruption, is so deep (1,600 ft/500 m) that the bottom is actually below the local water table, providing us with a unique “window” into a realm that is normally hidden from direct view.

Ground water did not rush in and fill the crater immediately because it takes time for water to squeeze through the pores and cracks of the surrounding rock, and because volcanic heat can evaporate ground water just as it does surface water. With time, the surrounding ground water slowly squeezed through the voids, and the subsurface cooled enough that water was able to remain in liquid form and accumulate within this newly exposed subaerial space. Water will continue to flow into the crater, and the lake will continue to get deeper, until a point of equilibrium is reached.

For the first few months, the source of the water was not known. Did it come from groundwater, in turn fed by rainfall? Or did it come from the condensation of water vapor released directly from magma? HVO was able to answer this question thanks to the water sampling missions. Analysis of the isotopes in the water indicated that it was meteoric in origin, meaning that it originally came from rainfall. While a small amount of rain falls directly into the crater, most of the water is coming from groundwater (that started off as rainfall that percolated into the ground) seeping in where the water table intersects the crater. 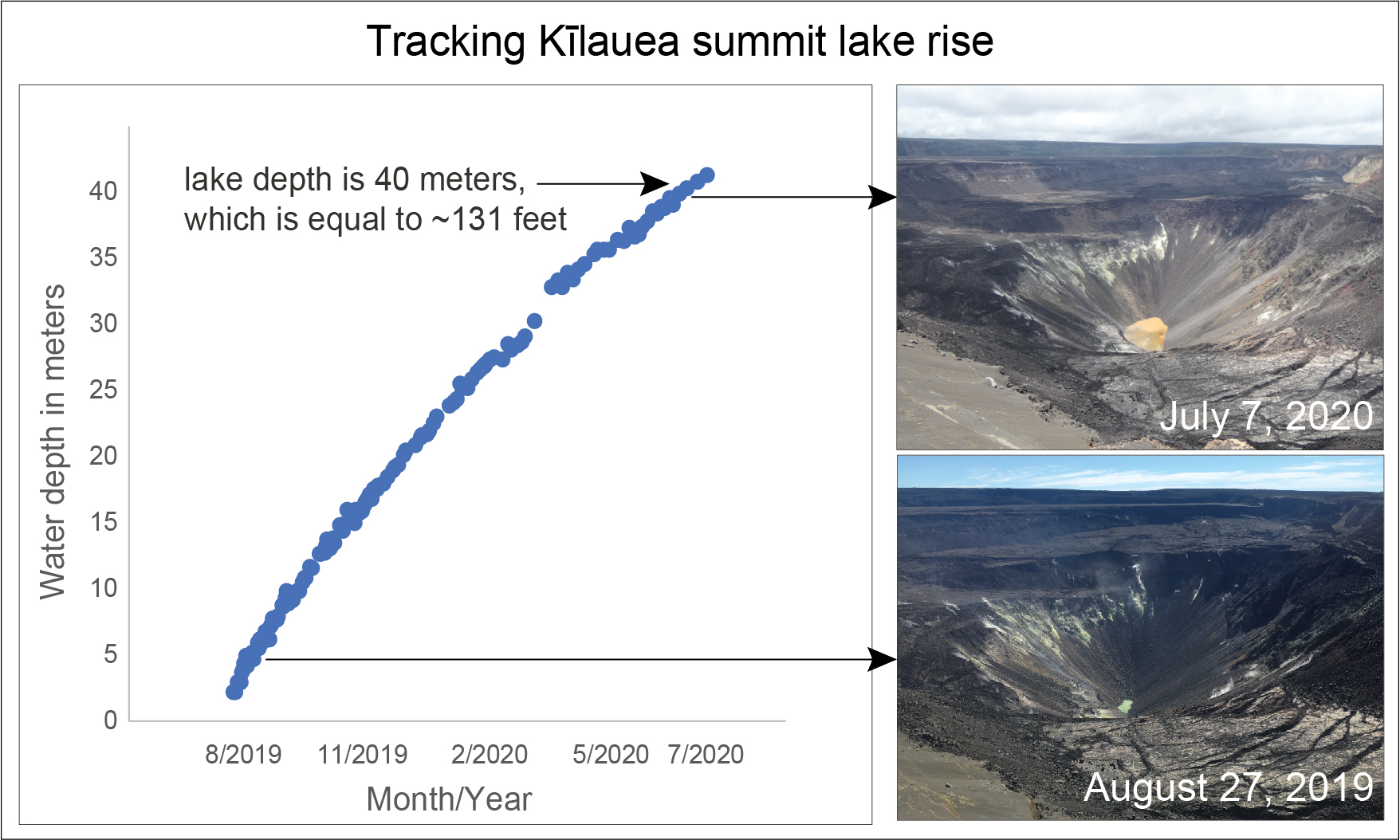 With time, minerals and volcanic gases dissolve into the water, and the lake’s chemistry changes. When the lake first formed it was a light blue green in color, a color that is still seen in parts of the lake where there is higher influx. The surface water is mostly shades of orange and brown now, likely due to dissolved iron-rich sulfate minerals. The water within the lake is not uniformly mixed, and cells of water with different color, chemistry and temperature are seen to circulate.

Besides being uncommon because of its very existence, this lake is unique in that it is only mildly acidic, with a pH of ~4.0, while most volcanic lakes are either strongly acidic or strongly alkaline. For reference, orange juice is also mildly acidic with a pH of 3.5. The water’s acidity is likely being moderated at this early stage of development, and it may become more acidic in the future.

Following a year of steady growth, the lake now covers an area of more than 6 acres (2.5 hectares) and reaches a depth of more than 130 ft (40 m). Its volume exceeds 125 million gallons of water, equivalent to nearly 200 Olympic-size swimming pools!

As one HVO scientist said, “We are watching a crater lake being born.” As this lake continues to grow, HVO will continue to watch carefully, to learn as much as we can, and to share what we learn. A future Volcano Watch article will describe potential hazards that may result from the presence of this water lake within Kīlauea caldera.