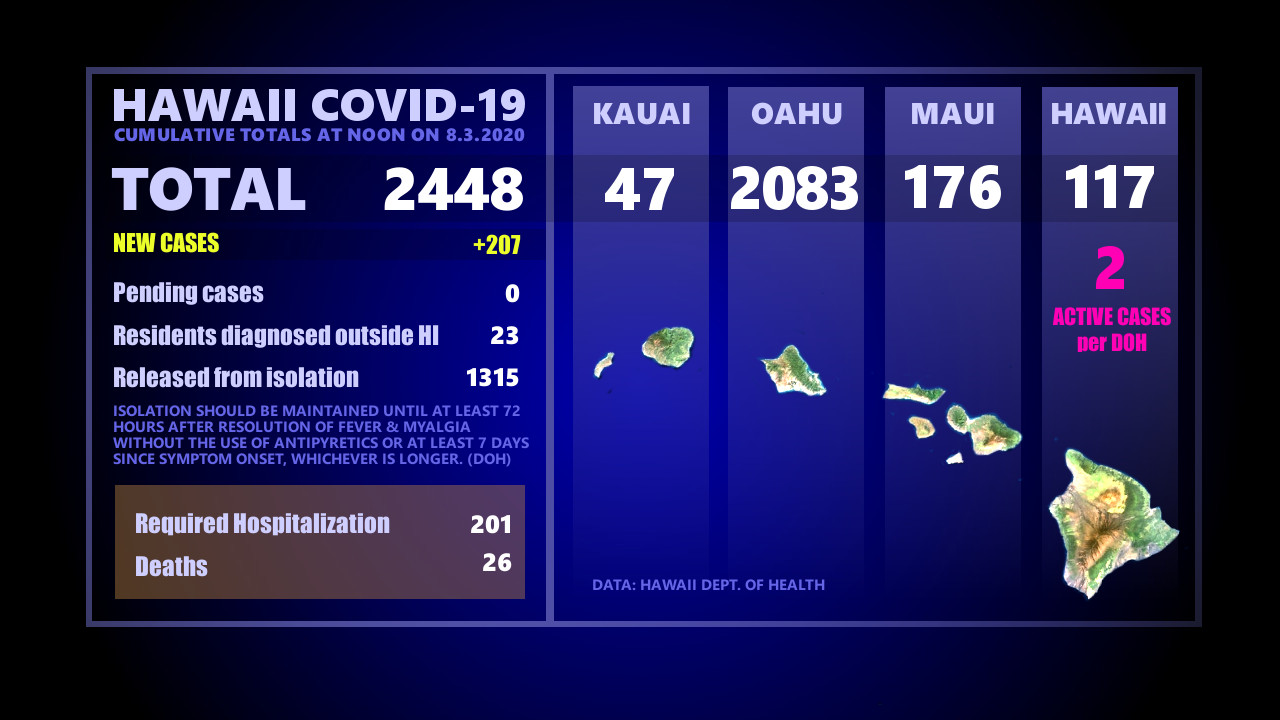 HAWAIʻI - There were 207 new cases of COVID-19 identified in the State of Hawaiʻi on Monday, although more than half of those cases were the result of delayed reporting over the weekend. 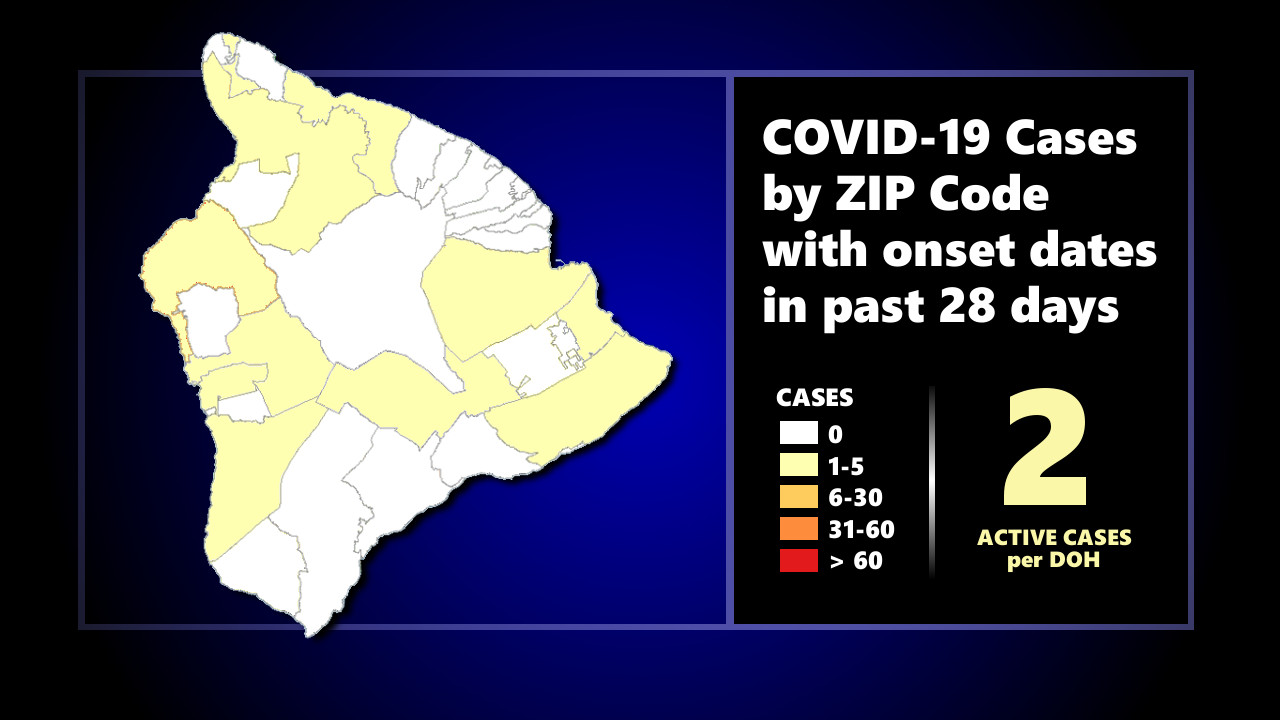 BIVN graphic features the number of “active” cases as reported by the Hawaiʻi Department of Health at noon, and a map showing zip code areas with reported cases having onset dates in the past 28 days according to the Hawaiʻi health department.

(BIVN) – On Monday, the State of Hawaiʻi reported another jump in reported COVID-19 cases, marking a new single-day record for new infections.

The Hawaiʻi Health Department says 207 new cases have been identified statewide. Almost all of the new cases are on Oʻahu, with two (2) on Hawaiʻi island and seven (7) in Maui County.

The Hawaiʻi County Civil Defense said on Monday morning that one of the new cases “is travel related, which emphasizes the importance of exercising caution of traveling.” The County of Hawaiʻi says no one is currently hospitalized with COVID-19 on Hawaii Island.

Gov. Ige held a news briefing Monday after DOH reported another spike in COVID-19 cases. A total of 207 cases were announced today, although 114 of those cases are due to delayed test results. The governor pointed out it is a result of community spread and that people have been relaxing and letting their guard down. He also gave an update on contact tracers in the state, providing assurances that despite concerns, DOH has enough contact tracers trained to handle the number of cases. Gov. Ige said, “The number of contact tracers currently on staff are managing today’s demands. The DOH is activating more contact tracers to handle the expected increase in cases.” He also pointed out the National Guard has 60 contact tracers available to assist at a moment’s notice and scale up on contact-tracing capacity.

However, the governor and DOH have both noted that contact tracing isn’t a substitute for safe practices, such as physical distancing and wearing masks, that prevent the spread of the virus. In his briefing Gov. Ige said, “As we re-opened, many people have relaxed their vigilance and this new surge is a result. If we don’t get this surge under control, we may need to put back some restrictions and no one wants to see that. We can only beat COVID-19 by working together. Everyone needs to take personal responsibility. Wear a mask, wash your hands, practice physical distancing, avoid large gatherings, stay home if you’re sick, and keep your children home if they feel sick. We were successful in keeping the virus under control and I know we can do it again.”

From the Hawaiʻi Department of Health:

The highest, single-day record of new positive COVID-19 cases is being reported by the Dept. of Health today, at 207. Approximately 114 of these cases are the result of delayed reporting over the weekend, a result of private clinical laboratory reporting issues.

Health Director Bruce Anderson said, “It’s becoming increasingly more difficult to detail all of the situations in which people are becoming infected with coronavirus. It runs the whole gamut of hanging out with close friends, socializing in bars, attending religious events and funerals, and many other types other social gatherings. This virus does not discriminate on who it infects and the only way to prevent its spread is to limit exposure to others by using face coverings, physical distancing and avoiding gatherings and crowded places. Unfortunately, Hawai‘i is experiencing spikes in cases similar to many mainland states, and in most cases, we can track new infections back to those who have let down their guard. Everyone needs to take this very seriously.”

Many beaches on Oahu were as crowded as they were before the COVID outbreak. On Maui, Little Beach in Makena State Park was less crowded than normal. This was likely the result of social media postings that suggested law enforcement would be on scene to break up so-called drum circles. Health investigations have traced at least one case in a person who recently attended a drum circle. With an estimated 100 people on the beach for sunset at Makena and the rising of the full moon, there were no masks in evidence and there appeared to be little, if any, physical distancing between groups of people. The scene here was repeated on beaches and in parks across the state.

The DLNR Division of Conservation and Resources Enforcement (DOCARE) reports receiving numerous complaints over the weekend of people, particularly in State Parks, not abiding by state and county emergency rules. This includes multiple complaints about people on small boats not following the required rules.

“As long as individuals in our communities fail to accept personal responsibility for the spread of COVID-19, we are unfortunately going to see continued days of triple digit numbers,” said Anderson. “This already has resulted in the renewal of restrictions on large social gatherings and other conditions and is likely going to lead to additional ones.”

Last week saw day-after-day of new record numbers, with most of the new infections being diagnosed in Honolulu. Today, 198 of the 207 cases are from O‘ahu, with seven (7) on Maui and two (2) on Hawai‘i Island.

Anderson concluded, “We are once again, as we have from the beginning of this crisis, asking every resident of Hawai‘i to take this threat with the utmost seriousness. Life, as we knew it, pre-COVID-19, cannot return to normal until we again flatten the infection curve. It takes everyone doing their part by following the simple and now-common steps: wear your mask, physically distance, wash your hands frequently and, perhaps most important, stay home if sick. With everyone’s kōkua, we can get back to where we were and enjoy all the good things life in Hawai‘i has to offer.”

The organizers of “Hawaiʻi’s oldest food festival” say this year’s festival has been cancelled, but say the event will return in 2021 to celebrate its 50th festival. From the organizers:

These are trying times. Hawaii, along with our country and the world are facing unique challenges. After careful deliberation and discussion, the Kona Coffee Cultural Festival has made the difficult decision to postpone this year’s Festival and return for its 50th celebration November 5­ -14, 2021.

Due to the impacts of COVID-19, the 50th Festival was scheduled for November 4-8, 2020 with a modified five-day schedule. However, current health guidelines both locally, nationally and around the world no longer make this feasible.

“Our Board of Directors determined that a scaled back version of the Festival that complied with social distancing guidelines, would not be able to celebrate the 50 years of culture behind Kona’s famous coffee festival,” said Valerie Corcoran, Kona Coffee Cultural Festival President. “We look forward to welcoming festival goers to the 50th Kona Coffee Cultural Festival in 2021.”

The award-winning Kona Coffee Cultural Festival is recognized as the oldest and one of the most successful food festivals in Hawaii and honors Kona’s cultural heritage and recognizes the accomplishments of Kona coffee pioneers, farmers and artisans.

On Saturday, 3,478 people arrived in Hawaii, according to the Hawaiʻi Tourism Authority. Today, the authority reported:

Yesterday, 2,977 people arrived in Hawaii. During this same time last year approximately 35,000 passengers arrived in Hawaii daily, including residents and visitors. The state’s mandatory 14-day self-quarantine started on March 26th for all passengers arriving in Hawaii from out of state. This table shows the number of people who arrived by air from out of state yesterday and does not include interisland travel. This data was collected from the Hawaii Department of Transportation’s (DOT) Mandatory Travel Declaration Form.