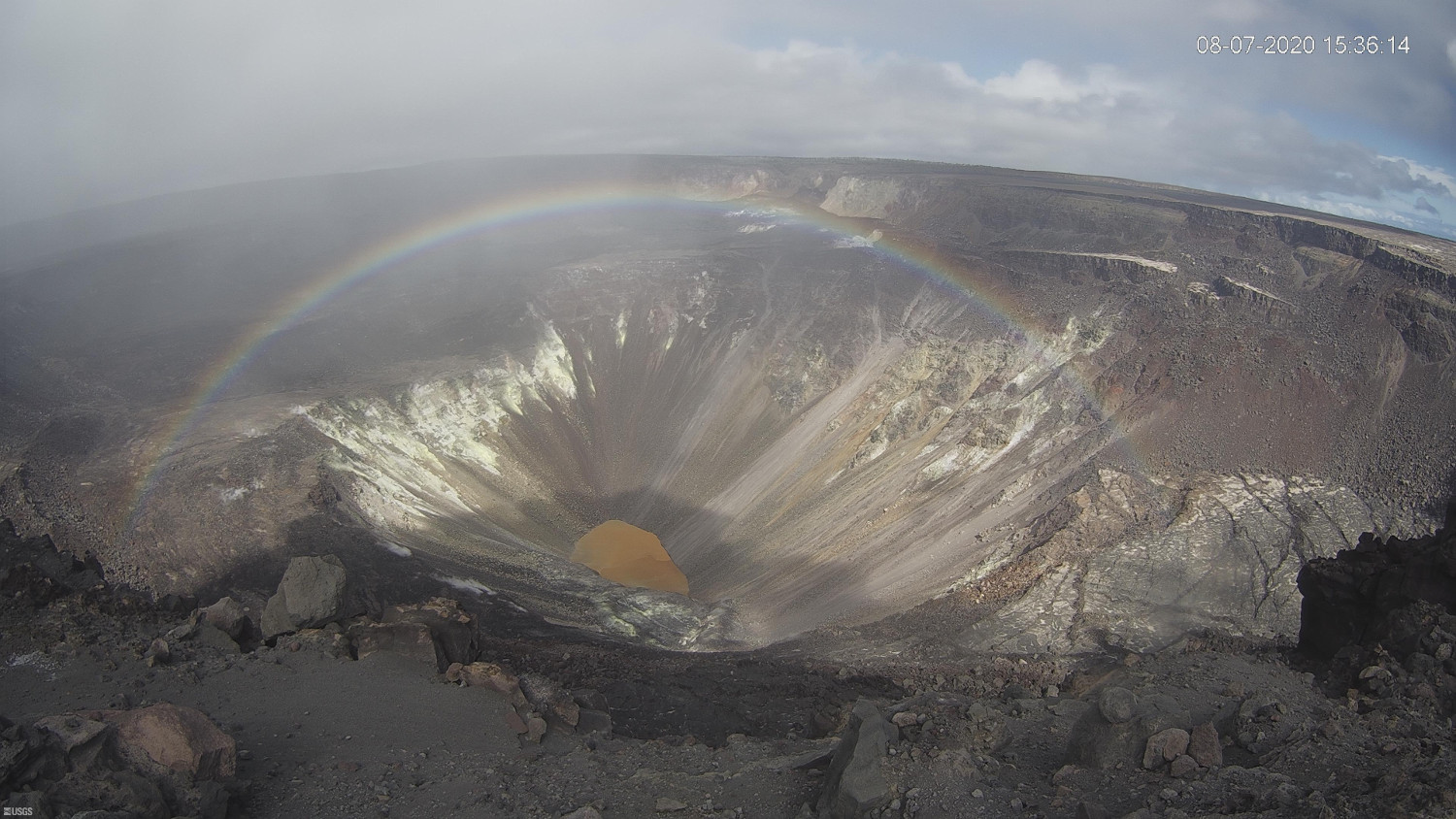 The KWcam webcam at Kīlauea's summit captured a rainbow over the water lake in Halema‘uma‘u on the afternoon of August 7, as light mist moved across the caldera. Courtesy USGS HVO.

VOLCANO WATCH: There Was Water In Kīlauea Caldera Before 2018 Summit Collapse 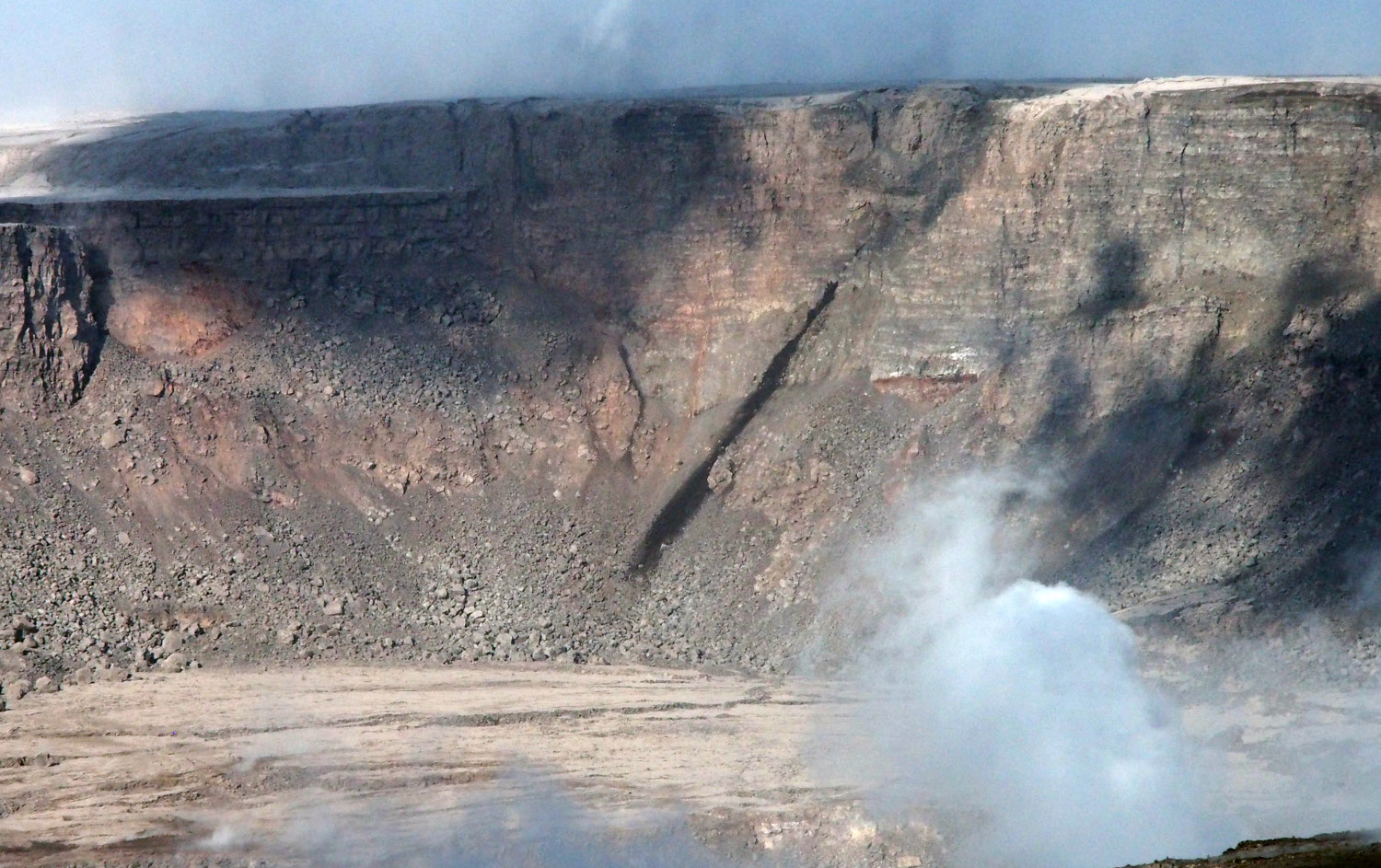 Black streak on caldera wall (center) is about 50 m (yards) long, and white steam plume (lower right) rises from northwestern part of Halemaʻumaʻu. Photo from Volcano House Hotel on July 4, 2018. The configuration of this area changed considerably after the photo was taken, as collapse continued into early August. USGS photo.

On July 4, 2018, an observer at the Volcano House Hotel was watching the evolving collapse of Halemaʻumaʻu Crater, 4 km (2.5 miles) away. Suddenly he did a double take, blinked a couple of times, but couldn’t erase the dark line descending the wall of Kīlauea caldera above Halemaʻumaʻu. Not knowing what it was, he dubbed it the ‘black streak.’

Over the next few days, the black streak came and went. Finally, observations showed that the streak stayed black during a time when a lot of dust was billowing from Halemaʻumaʻu. This was proof positive that it was made by water, not a rockfall.

The water flowed from a point 10–20 m (yards) below the rim of the caldera, high above the groundwater body that today feeds the deepening lake described in the past two Volcano Watches. This point is within the national park’s presently closed SW Rift wayside (marking the upper extent of Kīlauea’s Southwest Rift Zone), beneath which are many vertical dikes of solidified magma. How can water be so high in this area?

We put two and two together. During exceptionally heavy downpours, a river flows for an hour or so across the ground surface between the south end of Uēkahuna Bluff and SW Rift, a distance of 600–800 m (yards). The flowing river, which we nicknamed Kīlauea river, is several meters (yards) wide and a few centimeters (inches) deep. Most notably, the flowing river always ends before reaching SW Rift, sinking into alluvial sand. Where does the water go? Could that be the water that forms the black streak?

Yes, we think so. Beyond where it disappears, the river water probably flows underground but is dammed by dikes beneath the SW Rift area, forming a shallow perched aquifer. Faulting of the caldera wall during the 2018 summit collapse opened a pathway for this stored water to exit the aquifer and pour into the caldera.

The black streak, more prosaically called a water cascade, has reappeared sporadically in the past 2 years. In fact, a couple of such ephemeral cascades may streak the same area. Any photographs of a black streak taken by a reader since 2018 would be much appreciated. Recent photos show a cavity at the head of one cascade, either a lava tube or drained magma conduit. Volcanic ash has been washed from the cavity and forms a deposit next to the cascade.

The perched water body responsible for the water cascade is one of two such bodies existing before 2018. The other formed a tiny warm pond on the caldera floor 500 m (yards) north of Halemaʻumaʻu before it enlarged in 2018. Lush vegetation surrounded the pond, and microorganisms lived in the water.

The tiny pond drained as Halemaʻumaʻu widened in 2018, though its site, marked by vegetation, remains. As the crater expanded in June and July, a white steam plume generally rose above the northwestern part of the crater, contrasting with the dusty brown clouds that engulfed most of the crater. The plume might have been generated by boiling of water in the same shallow aquifer that supported the pond.

Could other shallow water bodies exist unseen beneath the caldera floor? More rain falls on the northern part of the caldera than on the southern. Several caves below the northern caldera floor emit steam and are very hot, as cavers attest. Most likely the heat comes from solidified lava flows and lakes active in this area in the 19th and early 20th centuries, and it heats rainfall to steam. The steam persists even in dry weather. Does this suggest the presence of a deeper water body? Probably not, but we can’t be sure.

Any perched water body would doubtless pale in importance when compared with the more extensive groundwater reservoir that supports the present lake. Such bodies would be both smaller and higher (farther from magma) than the main reservoir. Nonetheless, we would be remiss not to consider that even shallow water could contribute to explosive hazards at the summit of Kīlauea.