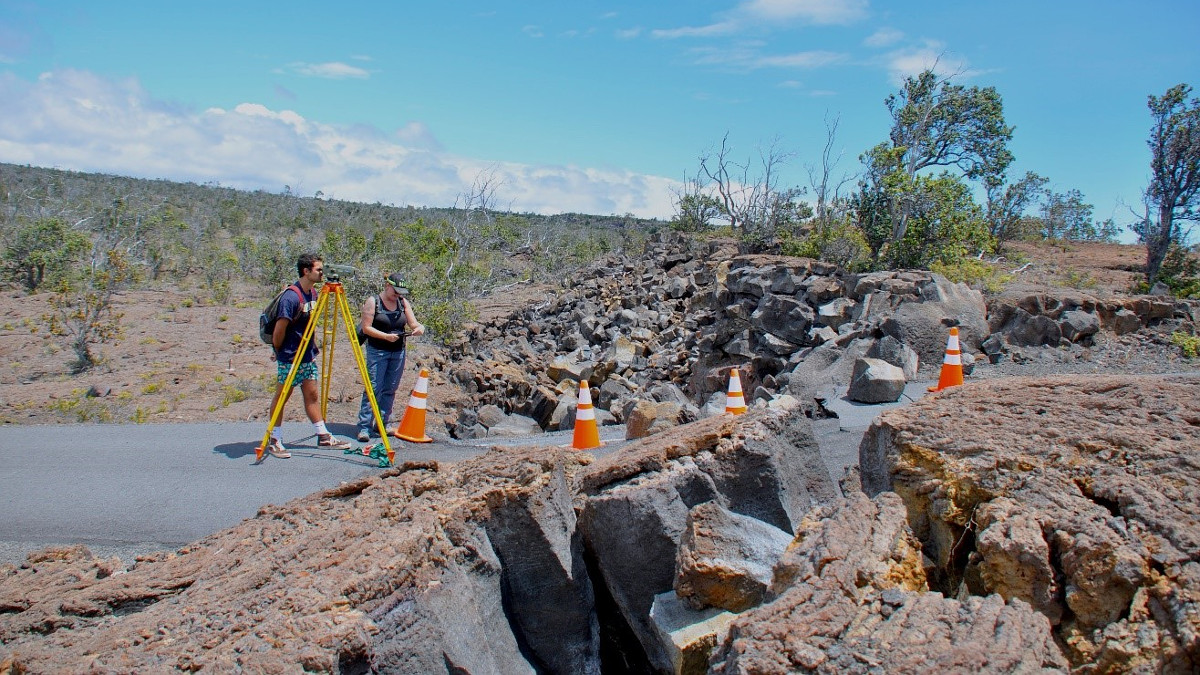 UH-Hilo geology majors measure vertical offset of Hilina Pali road on Kulanaokuaiki Pali in Hawai‘i Volcanoes National Park shortly after the end of Kīlauea’s 2018 eruption in September. Events in 2018 offset the road at this location by approximately 20 cm (8 in). UH-Hilo photo by S. Lundblad

The Koa‘e fault system connects Kīlauea’s East and Southwest Rift Zones south of the caldera. Faults here appear as low cliffs, or “scarps” along Hilina Pali Road in Hawai‘i Volcanoes National Park. These fault-cliffs slip during major earthquakes, such as those of May 4, 2018—near the beginning of Kīlauea’s 2018 eruption.

Koa‘e fault movements have offset ancient lava flows by as much as 15 m (50 ft) over a period of centuries. This area provides an important long-term record of motion due to the lack of recent lava flows covering the faults, which makes it an ideal location to study motion of Kīlauea’s south flank. More recently, faults have offset roads and footpaths used by early Hawaiians. So, how much fresh offset took place during and after the 2018 eruption?

A recent “Volcano Watch” article detailed how geodesy, the science of measuring Earth’s shape, is used to measure the shape of Hawaiian volcanoes. New technologies, such as satellite interferometry and the Global Positioning System (GPS), depend on satellites to make geodetic measurements.

One older approach, “leveling,” however, remains a valuable geodetic method some 170 years after it was invented. USGS Hawaiian Volcano Observatory (HVO) scientists have used it for decades to study our volcanoes, with important results.

Since the 2018 eruption, the Geology Department at the University of Hawai‘i (UH) at Hilo has partnered with HVO scientists to do “old school” leveling where it is the best approach available. UH-Hilo has capable and enthusiastic geology students, and over the years many have volunteered to measure the cracks and faults.

Leveling uses telescopes aimed at hand-held, graded stadia rods, essentially giant vertical rulers, at specifically positioned field stations. The equipment is used to precisely measure elevation differences between stations marked by stainless steel bolts cemented into bedrock. Horizontal distances between stations are determined with ordinary measuring tapes. If elevations and distances have changed during the time since the previous measurements, repeat leveling will detect it even down to the millimeter scale!

Leveling requires teams of people working along an established grid in the field, and it’s time-intensive. Field stations are commonly set around 90 m (300 ft) apart.

Fortunately, USGS scientists first began leveling along the Koa‘e faults in the 1960s, providing a long-standing record of data and field stations already in place. Around each leveling station is an array of subsidiary “crack stations,” allowing measurement across individual Koa‘e faults and their related ground cracks.

Going back to the 1960s, we find that in a typical year the roughly 3-km wide (2 miles) land strip encompassed by the Koa‘e fault system widens by about 1.5 cm, just over half an inch. Individual faults move only a few mm each, about 1/8 of an inch. In contrast, the largest vertical movement recorded during the 2018 earthquakes along a single fault was over 40 cm (16 in)!

When the Koa‘e faults move, they either slide vertically or open to create a deep crack. A dramatic example of opening was the Hilina Pali Road 2018 faulting near Kulanaokuaiki campground, which split the road. The prominent slope the road ascends is a result of repeated fault movement over several hundred years. Shortly after the end of the 2018 eruption, leveling revealed that the rates of change along the Koa‘e faults quickly returned to the much slower normal pace.

We’ve learned several important things about the behavior of the fault system from the on-going Koa‘e leveling campaign. Most of the relief along these cliffs is created by large events. The faults are also very efficient “earth movers.” Very few new cracks formed as a result of the large geologic events of 2018.

Instead, motion tends to continue repeatedly along existing cracks, opening them wider and making their scarps taller over time. The motions along the Koa‘e faults are also sensitively tied to what happens elsewhere on the volcano, even many miles away, such as the 2018 earthquakes underneath Kīlauea’s south flank and the repeated collapse of the summit caldera.

UH Hilo students, working closely with scientists, played important roles in collecting and analyzing the data supporting these insights. Thus far, two groups of students have traveled to scientific conferences to present their findings. We are proud of the contributions these new researchers have made to the Island of Hawai‘i community and the wider world of science.