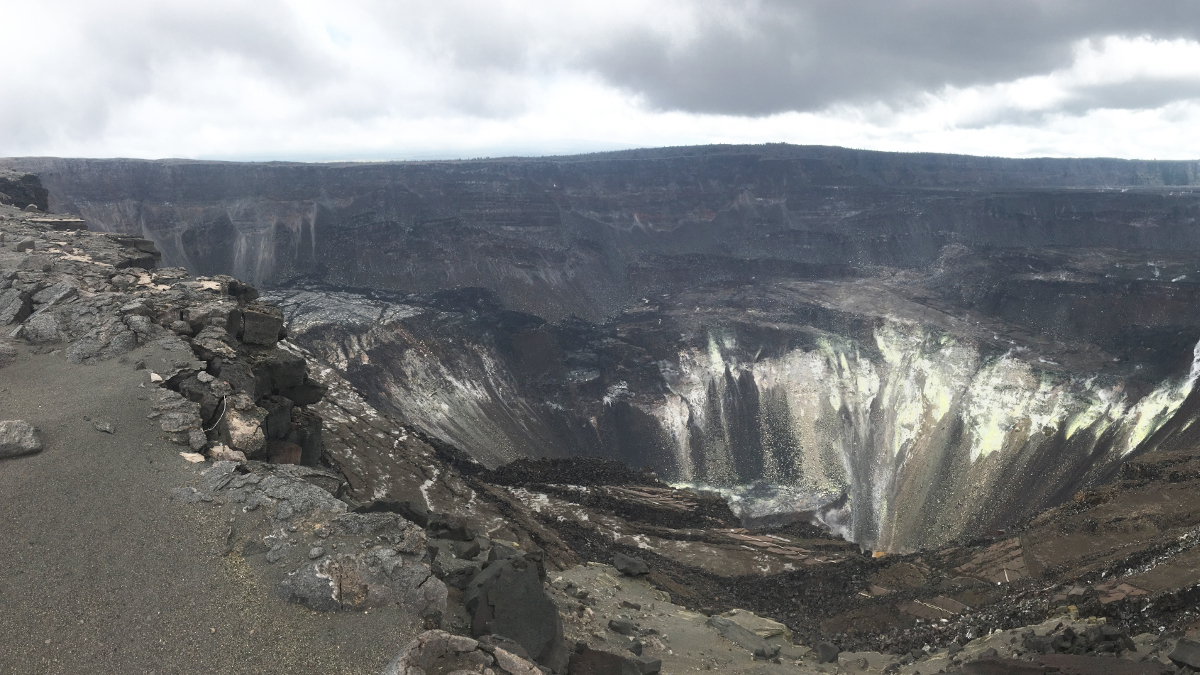 Image shows the view from the south rim of the 2018 collapse at Kīlauea's summit(USGS photo by M. Patrick)

Though there hasn’t been an eruption in Hawai‘i in 2020, the year has hardly been quiet—earthquake swarms, an elevated alert-level on Mauna Loa, and a growing water lake on Kīlauea are reminders that island residents should be aware of Hawaiʻi’s active volcanoes.

In January 2021, the USGS Hawaiian Volcano Observatory (HVO) will spearhead Hawaiʻi’s 12th annual “Volcano Awareness Month,” during which residents will have an opportunity to learn more about Hawaiian volcanoes. Unlike previous years which featured in-person presentations and field trips by HVO staff and cooperators – County of Hawai‘i Civil Defense Agency, University of Hawai‘i at Hilo, and Hawai‘i Volcanoes National Park – activities this year will be “virtual” due to the pandemic.

Volcano Awareness Month was established in 2010 through a County of Hawai‘i proclamation to encourage “knowledge and awareness of Hawaiian volcanoes and the proper safety measures to follow before, during, and after a volcanic eruption.”

Although we’re currently in the period after Kīlauea’s 2018 eruption and Mauna Loa’s 1984 eruption, recent activity at both volcanoes reminds us that we’re also in the period before the next eruption in Hawai‘i.

Let’s look back at this past, relatively quiet year to review volcanic activity and why volcano awareness remains important.

Despite low volcanic gas emission rates, sulfur smells were occasionally noted by Hawaiʻi residents. Residents also reported over 100 felt earthquakes in 2020. Earthquake swarms near Pāhala, Lō‘ihi Seamount, Nāmakanipaio campground, and Kīlauea’s summit prompted information statements from HVO. Monitoring data indicated that magma is slowly being supplied to Kīlauea and Mauna Loa. The water lake that appeared at the summit of Kīlauea in mid-2019 continues to grow in size and depth.

More recently, between Nov. 30 and Dec. 2, several hundred earthquakes occurred 1–4 km (1–3 mi) beneath Kīlauea’s summit and upper East Rift Zone. On Dec. 2, a transient increase in ground deformation resulted in about 8 cm (3 inches) of uplift of the caldera floor. This was about 4 months-worth of uplift in just 4 hours. Monitoring data from Kīlauea’s summit region indicated that a small injection of magma intruded below the surface of the volcano. Although magma didn’t make it to the surface, this event demonstrated that magma continues to refill the storage system within the volcano. Next week’s “Volcano Watch” will provide more information on this activity.

A magnitude-4.1 earthquake beneath the northwest flank of Mauna Loa on Dec. 4, along with nearby clusters of small earthquakes, remind us that Earth’s largest active volcano continues to show signs of unrest. These earthquakes were located in an area where, over the past several years, persistent minor seismicity (generally smaller than magnitude-2) has occurred. Elevated seismic activity is one reason that Mauna Loa’s volcano alert-level has been ADVISORY – “volcano is exhibiting signs of elevated unrest above known background activity” – since July 2019.

The last time an earthquake of similar magnitude and depth occurred in this area of Mauna Loa, approximately 5 km (3 miles) northwest of Moku‘āweoweo, was November 2011, when increased rates of minor seismicity were also occurring. In 2011, other monitoring data streams remained stable and an eruption did not occur. Current data streams on Mauna Loa also remain stable and do not indicate that an eruption is imminent.

These 2020 events remind us that Kīlauea and Mauna Loa will erupt again and that we should be informed and prepared for potential hazards associated with a restless or erupting volcano. In January 2021, video recordings of Volcano Awareness Month programs will be posted to the HVO website so that they can be viewed safely from home.

On each Tuesday in January, a 30–45-minute video presentation by HVO scientists will be posted at usgs.gov/hvo. Topics include a Kīlauea rift zone update (Jan. 5); Kīlauea summit water lake summary (Jan. 12); description of ground deformation and earthquakes at Kīlauea over the past year (Jan. 19); and discussion of Mauna Loa’s eruptive history and current status (Jan. 26). HVO will also post shorter video presentations throughout the month.

Whether you’re in Hawai‘i or elsewhere in January, you’ll be able to virtually and safely participate in Volcano Awareness Month. The full schedule of 2021 programs will be posted on HVO’s website later this month.