A synthesized voice was utilized in the narration for this story. Video and photos are from the USGS Hawaiian Volcano Observatory, National Park Service, and file video by Visionary Video.

HAWAIʻI VOLCANOES NATIONAL PARK - The USGS Hawaiian Volcano Observatory has been capturing video of the eruption from its unique vantage as it monitors the activity. 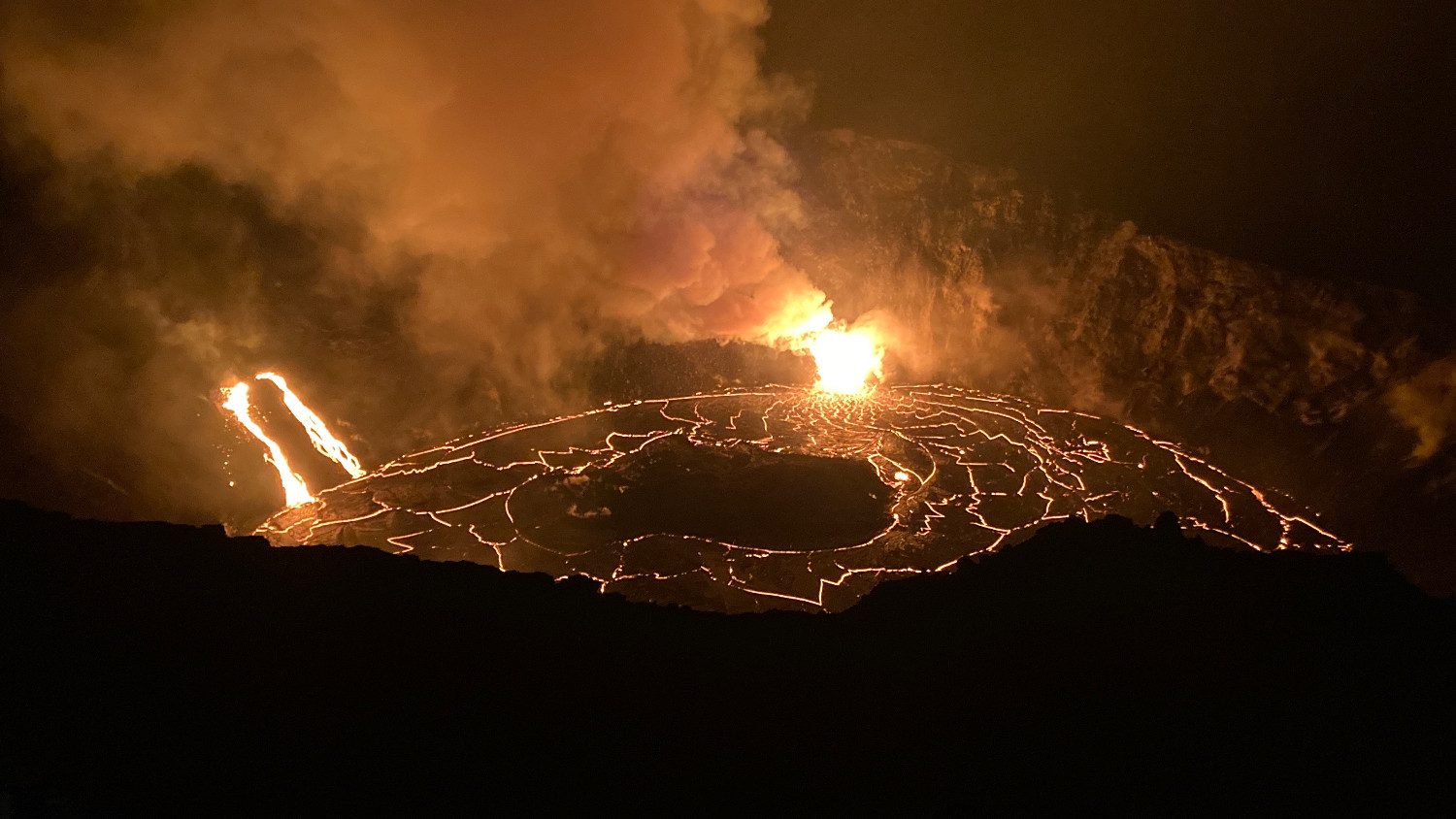 The current depth is more than triple the depth of the water lake that was in the crater until the evening of Dec. 20 when it was vaporized. Fountaining continues at two locations, more vigorously at eastern vent, and both vents continue to feed the growing lava lake. USGS photo by H. Dietterich.

Scientists report no significant change, as the new eruption at the summit of Kilauea volcano enters its third day.

The USGS Hawaiian Volcano Observatory has been capturing video of the eruption from its unique vantage as it monitors the activity. HVO issued an update on Wednesday morning.

This newly published map from the USGS helps to illustrate. 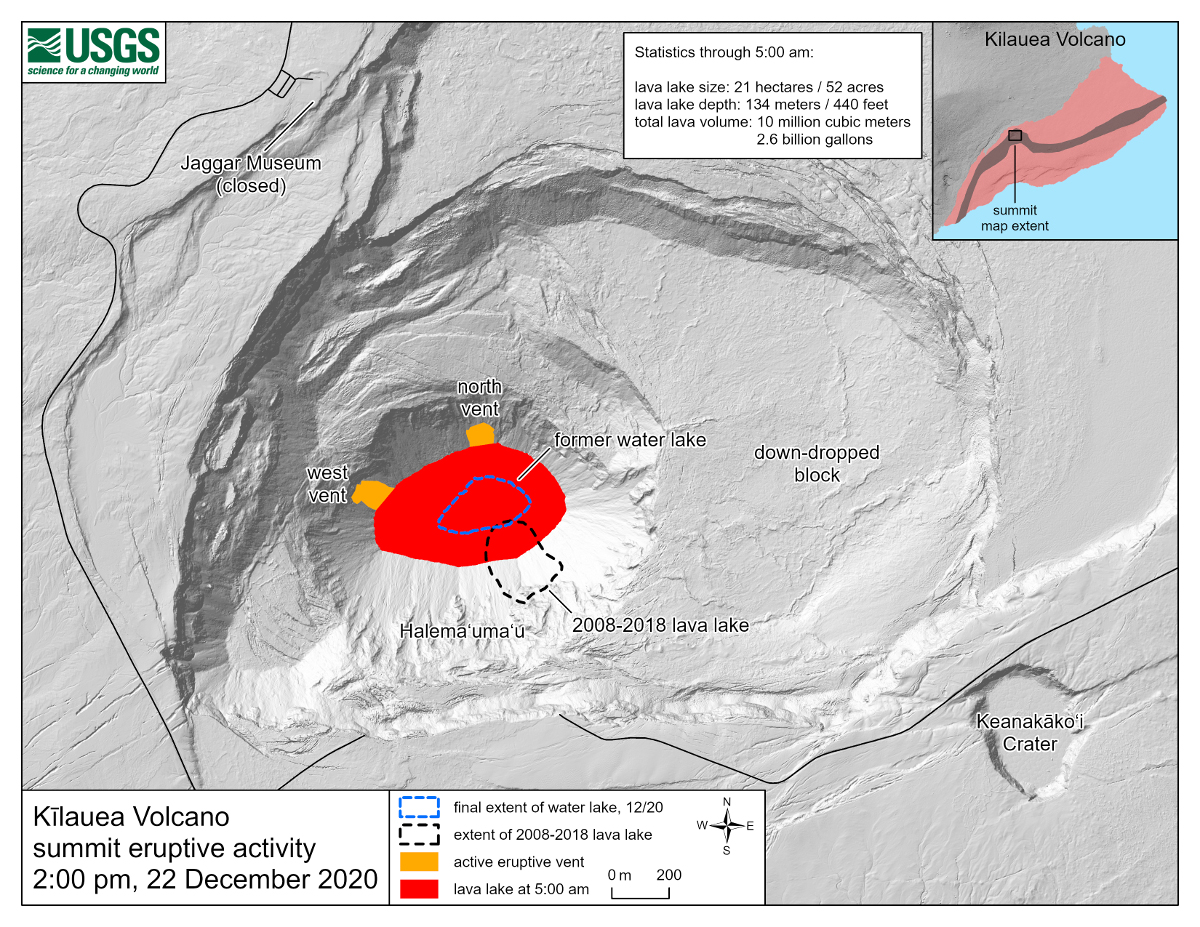 The west vent, which is located on the lowest down-dropped block within the crater, is feeding two narrow lava-channels into the lake. The north vent remains the most vigorous.

There have been dramatic changes within the summit caldera over the last decade, which are notated on the map. Before the new eruption, from July 2019 to December 2020, the crater was occupied by a water lake. The lake slowly formed following the 2018 caldera collapse. The map also shows the size and location of the previous lava lake, which erupted continually from 2008 to 2018. As the map shows, the current lava lake is larger than both previous lakes.

As of Wednesday afternoon, the lake surface was 470 feet deep, with an approximate volume of 12 million cubic meters. That’s equal to 2.7 billion gallons. The surface area was about 54 acres. Measurements indicate that the lake rose 75 feet in just over 24 hours.

There is also a floating island: of cooler, solidified lava within the lava lake. As the lake rises, the island has also been rising, and drifting eastward. Scientists say the island appears to be about nearly 500 feet in diameter, and is getting smaller. It is likely made of material produced early in the eruption that accumulated at the base of the crater.

HVO says summit tiltmeters continue to record steady, deflationary tilt. Sulfur dioxide emission rates remain high, and are around 30,000 tonnes per day. Seismicity remained elevated but stable, with a few minor earthquakes and tremor fluctuations related to the vigor of the fissure fountaining.

Due to the elevated gas emissions, vog has returned to Hawaii island. Especially over West Hawaii. The health department issued a notice on Tuesday. The sulfur dioxide, in particular, may cause problems with respiratory health in sensitive individuals. Health officials say conditions are changing rapidly, and the poor air quality may be very localized.

The Vog Measurement and Prediction Project, a partnership between state and federal agencies, provides real-time vog forecasts for the island. Models show there could be some hazardous air quality ahead for Ocean View in the days ahead.

The last time areas of Kona and Kaʻū were hit with heavy vog was during the 2018 eruption. These images show what conditions looked like in Kona at that time.

Unhealthy levels of gas are also registering on monitors inside the national park. Real-time information on air quality found on the National Park Service’s network show spikes were measured today, at the Steam Vents and Kilauea Visitor Center.

This new webcam view from Mauna Loa Strip Road looking at the Kīlauea summit appears to be washed out by a voggy haze.

In the event of voggy conditions, health officials advise the following precautionary measures:

This is especially important for sensitive groups such as children, the elderly, and individuals with pre-existing respiratory conditions.

Stay indoors, and close windows and doors. If an air conditioner is used, either in a home or a vehicle, set it to recirculate. The health department says you should always keep medications on hand and readily available. Daily prescribed medications should be taken on schedule and may provide protection from the effects of sulfur dioxide.

Remember that face coverings and masks used to prevent the spread of COVID-19 do not provide protection from sulfur dioxide or vog. Health officials say drink plenty of fluids to avoid dehydration.

Meanwhile, as crowds flock to see the new eruption of Kīlauea volcano, the Hawaiʻi Volcanoes National Park has had to make some adjustments. On Tuesday, park officials announced the closure of the HVNP backcountry for overnight use. The spike in visitation requires the full attention of staff to manage safe access to viewing areas at the summit of Kīlauea volcano. All existing backcountry permits are canceled, and rainchecks will be issued. The park will reopen overnight backcountry use once additional National Park Service staff are brought in to help manage the evolving eruption.

Given the depth of the crater, visitors will not be able to see the lava from the designated viewing areas, but the plume and nighttime glow are visible from many areas of the park.

National Park Service photos like this one of a rare moon-bow, taken by photographer Janice Wei, show that there are plenty of wonders to behold around the summit, as well.

HVO is maintaining visual surveillance of the summit and the East Rift Zone, and says it will continue to issue daily updates and additional messages as needed.