HAWAIʻI VOLCANOES NATIONAL PARK - The eruption of Kilauea is ongoing, confined to the summit caldera. Lava is still erupting from vents on the northwest side of the crater, feeding a growing lava lake below. 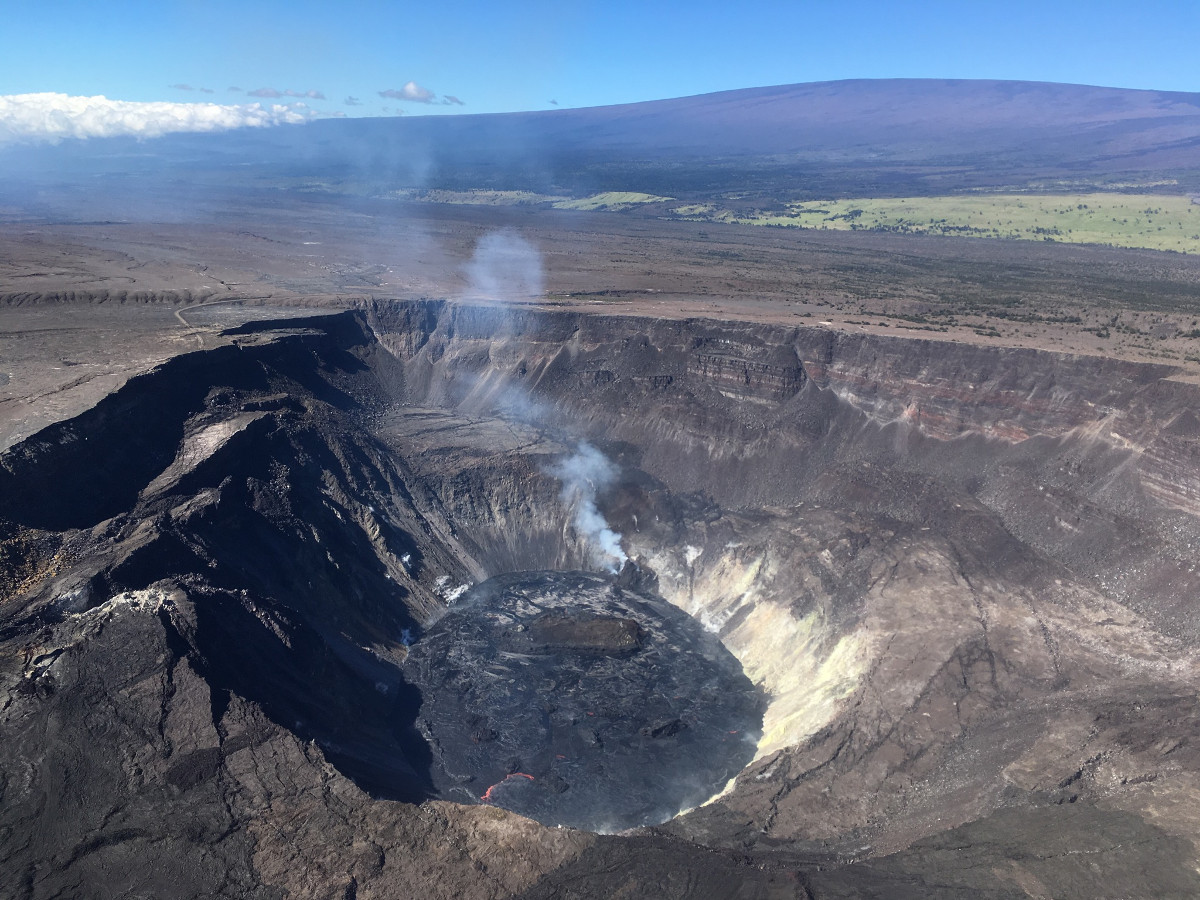 During an overflight of Kīlauea summit on January 7, HVO geologists captured this image of the growing lava lake within Halemaʻumaʻu. Sunny weather allowed for clear views of Mauna Loa, to the west. USGS photo by M. Patrick.

The eruption of Kilauea volcano on Hawaiʻi island is ongoing, and remains confined to the summit caldera. Lava is still erupting from vents on the northwest side of the crater, feeding a growing lava lake below.

As of Wednesday afternoon, the lava lake was measured at 636 feet deep, and is perched a couple of yards above its edge. 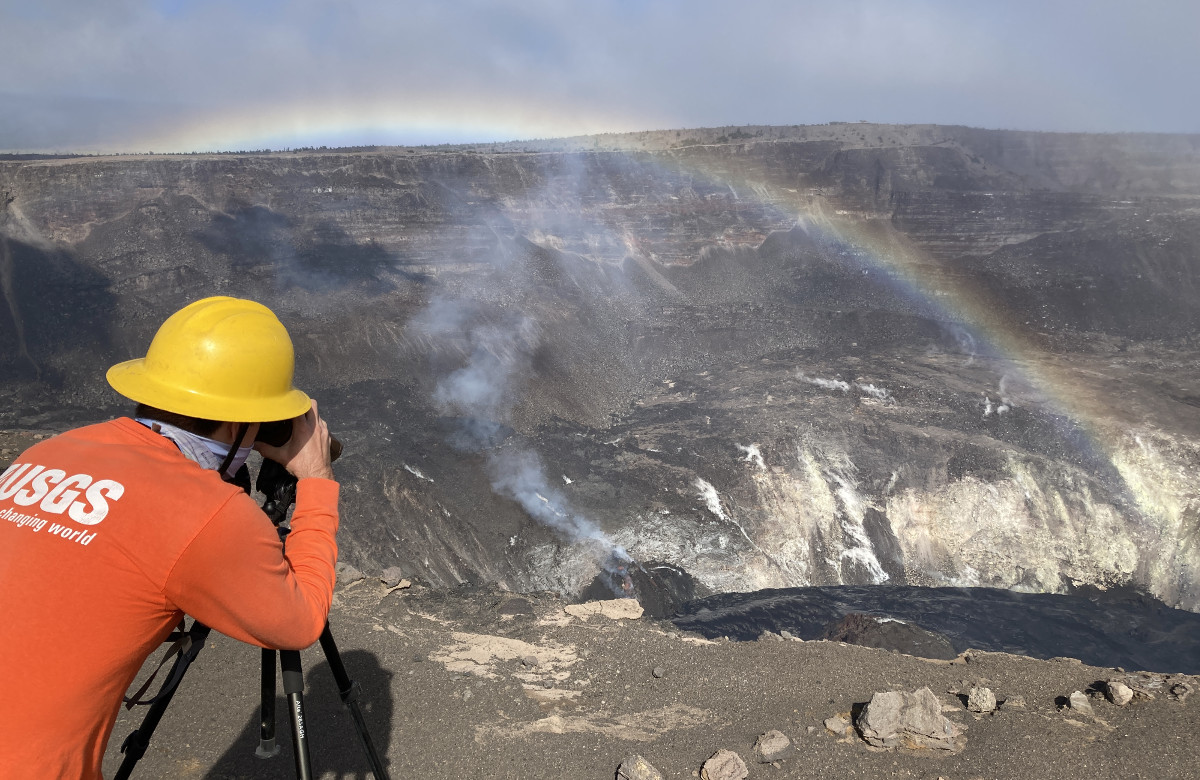 HVO scientists monitor the ongoing Kīlauea summit eruption from within an area of Hawai‘i Volcanoes National Park that remains closed to the public for safety reasons. They are equipped with a range of specialized safety gear and personal protective equipment such as gas masks, helmets, gloves, and eye protection. This view is to the northwest from the south rim of Halemaʻumaʻu crater. USGS photo by H. Dietterich on Jan. 6.

A rainbow added to the scenery on Wednesday. HVO scientists are monitoring the ongoing eruption from within an area of Hawai‘i Volcanoes National Park that remains closed to the public for safety reasons.

Scientists documented the west vent activity, and wrote about what they observed. Like this spattering from the top of a small cone, plastered on the northwest wall of summit crater. On Thursday morning morning, lava was presumed to be flowing through crusted channels to the lake below, and also appeared to be feeding a small, photogenic dome fountain in front of the west vents. Scientists say the dome fountain is probably from a submerged portion of the vent.

Later in the day, scientists noted that the dome fountain was no longer present.

USGS was also gathering images from a distance. The U.S. Geological Survey Landsat 8 acquired these images of the lava lake from a pass during the a day and during the night.

Sulfur dioxide emission rates are still elevated. Recent measurements were in the range of 3,000 to 6,000 t/d.

HVO wrote more about the islands of cooler, solidified lava that can be seen floating in the lava lake. They say such-islands have been observed in Kilauea lava lakes for more than 100 years. Some of them move around the surface, and some do not. 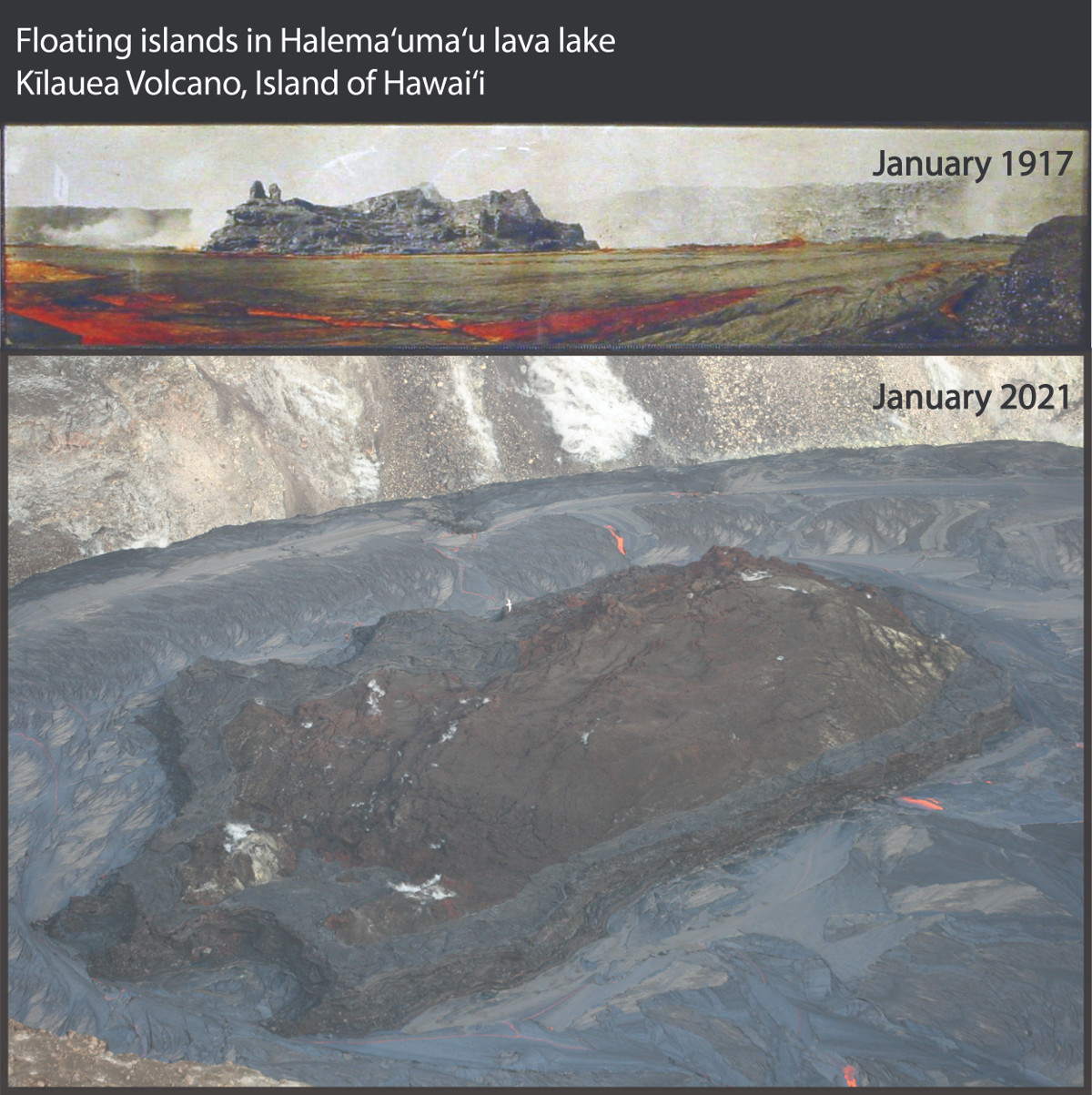 Here, the top photograph was taken from the edge of the summit lava lake in January 1917. At the time, the island rose about 65 feet up from the surface and was 330 feet wide in the direction depicted. Below that, a photo of the largest island as seen currently, which is about 820 feet long.

The scientists said that on January 1st, the islands’ edges were about 20 feet above the lava lake surface. By January 4, the whole island had risen by about 6 to 7 feet. The island has been rotating and moving both eastward and westward since its formation on the first day of the eruption. But on the evening of January 6, the island stopped moving. HVO says the apparent buoyancy changes of the island may be due to a density increase in the lava lake, as gases escape. Or it could be the sloughing off of island material from the subsurface.

HVO says it will continue to closely monitor Kilauea’s seismicity, deformation, and gas emissions for any changes, and maintains visual surveillance of the summit and the East Rift Zone. The observatory will continue to issue daily updates and additional messages as needed.