HAWAIʻI - Governor David Ige held a news conference on Tuesday, with a focus on the State's COVID-19 vaccination plan. 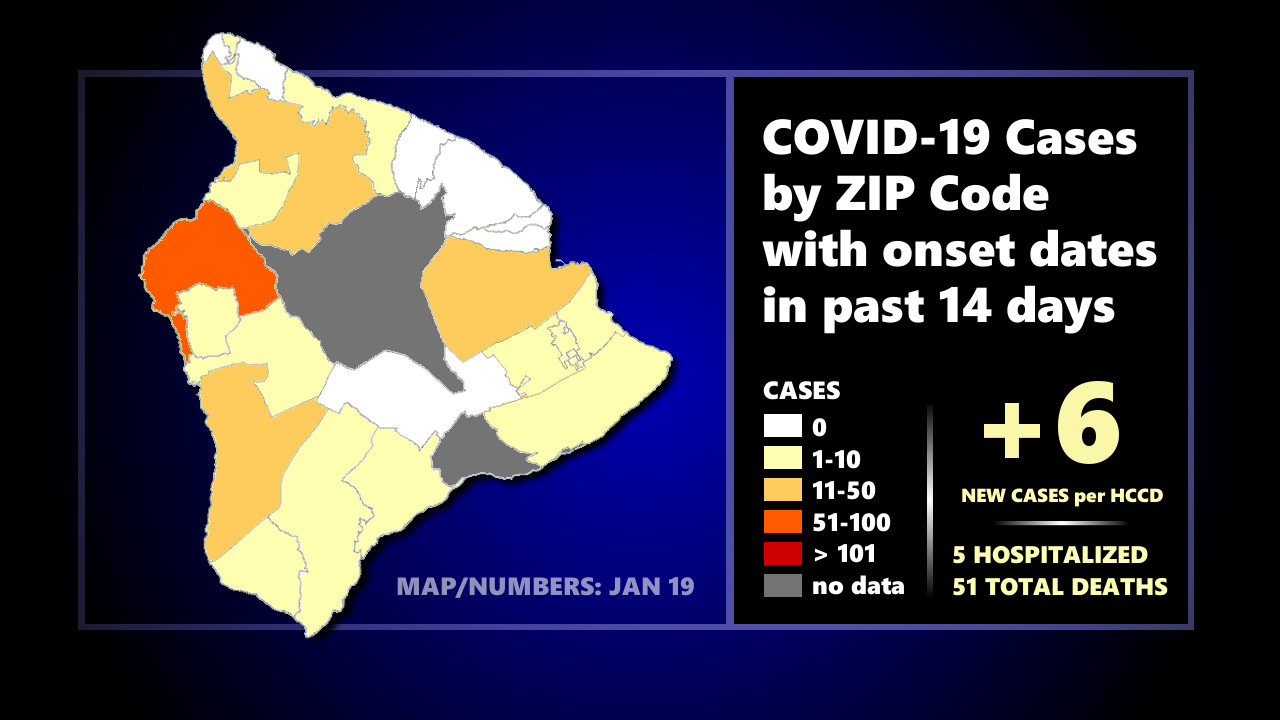 BIVN graphic features the number of new cases reported by the State of Hawaiʻi on Tuesday, and a map showing zip code areas with reported cases having onset dates in the past 14 days according to the Hawaiʻi health department.

On Hawaiʻi island, there were six (6) new cases of COVID-19, with five (5) persons hospitalized. There have been no deaths reported on the Big Island in the last three weeks, officials say.

Governor David Ige and other state officials held a news conference on Tuesday, which was livestreamed on Facebook.

This COVID-19 vaccine distribution update was provided by the Governor:

At a news briefing today, Governor Ige gave an update on Hawai‘i’s COVID-19 vaccine distribution. The governor emphasized that the state is moving as quickly as possible with the distribution process and reminded everyone that Hawai‘i is constrained by federal allocation of the vaccine. Gov. Ige said, “We are in a situation where the demand for the vaccine exceeds our supply. We are happy there is high demand for the vaccine and will ensure that we are using all of the doses allocated to Hawai‘i.” He also added, “Until the vaccine is widely administered, I am asking everyone to maintain our vigilance and continue the safe practices that have made Hawaiʻi a leader in containing the spread of COVID-19: wearing masks, washing hands and watching your distance. By doing this, and getting vaccinated when it’s our turn, we can protect public health, revive the economy, and strengthen our communities.”

Lt. Governor Josh Green provided this on current COVID-19 case counts, and the number of vaccine doses arriving in Hawaiʻi:

At the same briefing, Lt. Governor Josh Green gave an update on Hawai‘i’s COVID-19 case count, saying the state currently has a seven-day average daily case count of 122.3, and a 2.54% positivity rate. Hospitalization numbers have also dropped from 105 to 95.

Regarding vaccine distribution, LG Green added that DOH received more than 58,000 vaccine doses last week and is expecting roughly 33,400 doses to come in by Thursday. Dr. Elizabeth Char, DOH director, said that 19,000 of those doses are ‘first-time’ doses, the rest are ‘second’ doses. Green said, “We have been completing roughly 18,000 first doses each week. Those numbers will increase with the distribution set-ups we have. Over the weekend a successful point of distribution (POD) at UH vaccinated roughly 600 people” The lieutenant governor also asked that people step aside to let kupuna and frontline workers receive their vaccinations first. He added that the state hopes to vaccinate everyone in Phase 1a and 1b by the end of February 2021.

The Hawaiʻi County Civil Defense says the Hilo Medical Center and North Hawaii Community Hospital are offering vaccine registration to individuals who are 75 and older.

Kona Community Hospital, which has been administering vaccines only to Phase 1A eligible healthcare workers (including active community healthcare workers) for several weeks, says it began scheduling appointments for those people who are 75 years of age and older.

The hospital says it “had an overwhelming response from community members wanting to schedule an appointment, which caused a backlog of calls,” and is smoothing out its processes from the “lessons learned.”