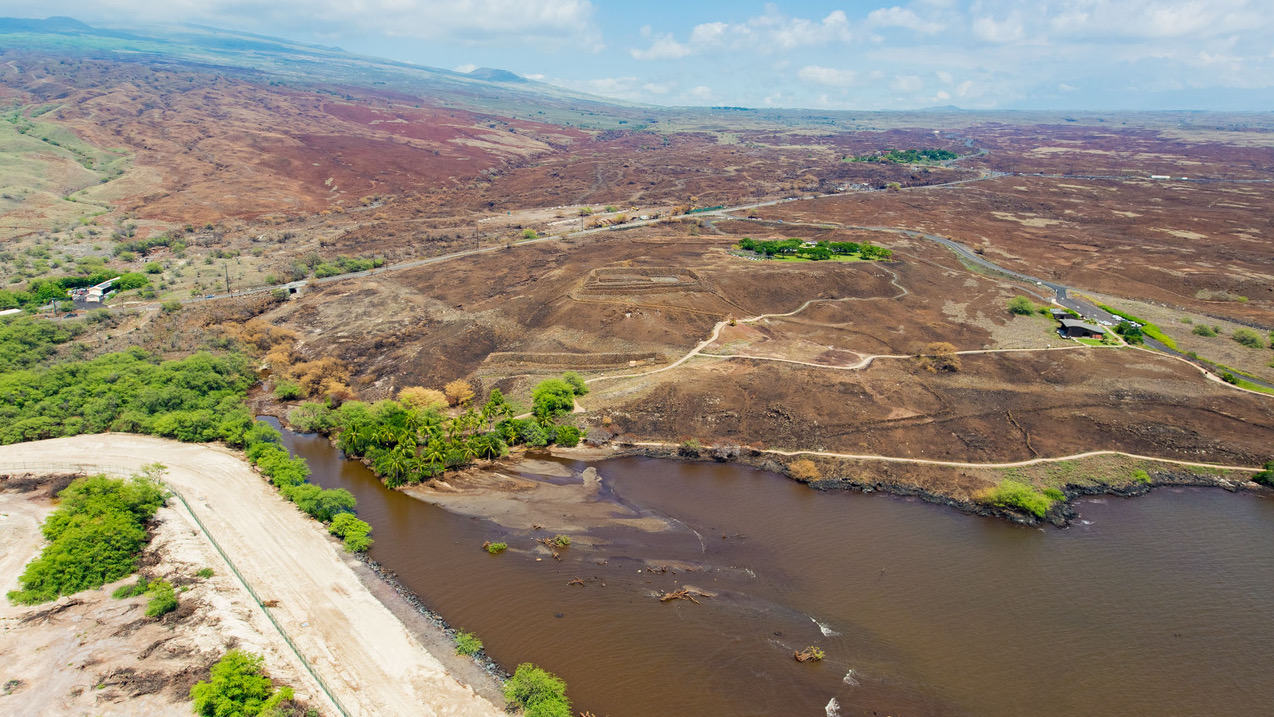 Sediment runoff enters Pelekāne Bay following a wildfire and flash flooding in 2015. Overgrazing by feral ungulates and cattle are the most significant contributors to erosion, which can be exacerbated by heavy rainfall and wildfires. Photo courtesy Andrew Richard Hara. 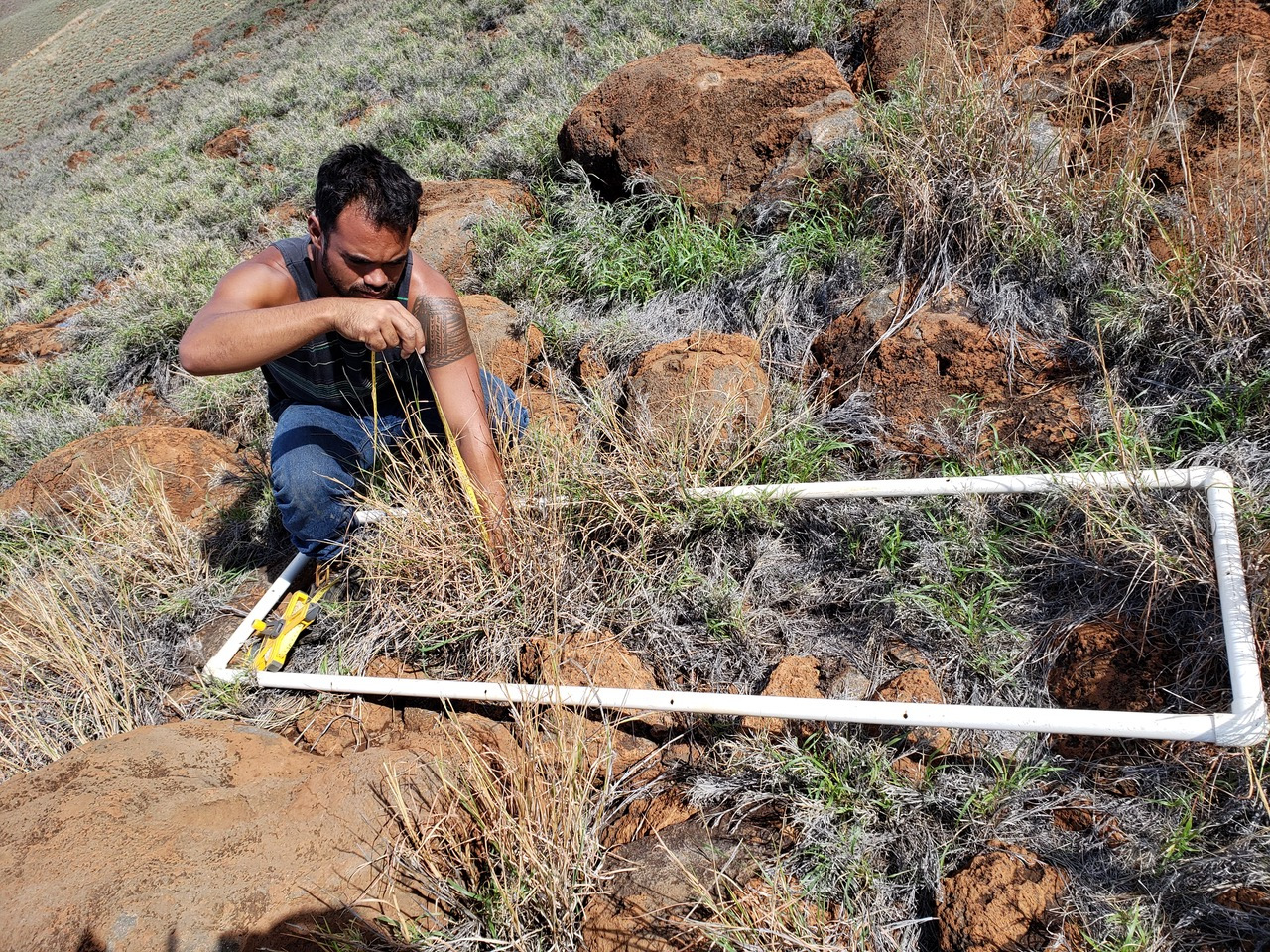 A watershed stewardship technician from The Kohala Center measures the height and percent cover of vegetation within the management zone. Modified Whittaker plots were established throughout both paddocks and data are collected quarterly. Photo courtesy The Kohala Center.

(BIVN) – The Kohala Center on Monday announced that the Pelekāne Watershed project has been completed.

From the Kohala Center:

A two-year effort to protect and improve water quality and ecosystem health in Hawai‘i Island’s Pelekāne Watershed was recently completed by The Kohala Center, an independent nonprofit organization based in Waimea.

Through the Hawai‘i State Department of Health’s (HDOH) Polluted Runoff Control 319 Program and in partnership with the U.S. Environmental Protection Agency (EPA) and the Hawai‘i Department of Land and Natural Resources (DLNR), The Center helped to implement a rotational and targeted grazing program to support erosion control in the watershed. The completed activities are expected to reduce future wildfire risk, sediment runoff, and nonpoint source pollution in the region, in turn protecting coral reefs, enhancing recreational usage, and contributing to historic and cultural preservation.

Pelekāne is one of South Kohala’s major watersheds, and a majority of the land is privately owned and used for cattle grazing. The EPA currently lists Pelekāne Bay as an “impaired waterbody” due to sedimentation. The National Oceanic and Atmospheric Administration (NOAA) selected West Hawai‘i Island, where Pelekāne is located, as a NOAA Habitat Focus Area because of its extensive reef systems, tangible threats, ongoing conservation efforts, and strong community involvement. The bay has been listed in HDOH’s List of Impaired Waters due to substantial soil erosion. Currently, 85% of the watershed is used for cattle ranching operations. Pelekāne Bay receives runoff from numerous streams within the watershed, and following brush fire events, the amount of sediment that reaches the ocean is far greater than what is considered acceptable.

Preventing wildfires by reducing fuel load—flammable vegetation such as non-native fountain grass and leaf litter—is a priority for managing erosion in the watershed. Large brush fires in the area in recent years have led to the runoff of vast amounts of sediment during post-fire rain events, compromising water quality and smothering coral reefs in Pelekāne Bay. A Pelekane Bay Watershed Management Plan developed in 2005 recommended the establishment of a rotational, targeted cattle grazing program to help reduce fuel load in the watershed, given that managed cattle can be highly effective at controlling brush levels. Because smaller and more manageable paddocks better facilitate targeted and rotational grazing, one large paddock was divided into two paddocks with the installation of fence and the repair of older paddock fences. Additionally, a new water trough was installed in a less-utilized pasture where water was not previously available in order to draw cattle away from Makeahua Stream. These steps were taken to minimize runoff caused directly by cattle, reduce the accumulation of cow manure in the riparian area, and minimize the buildup of fire fuels that could burn if left unchecked. 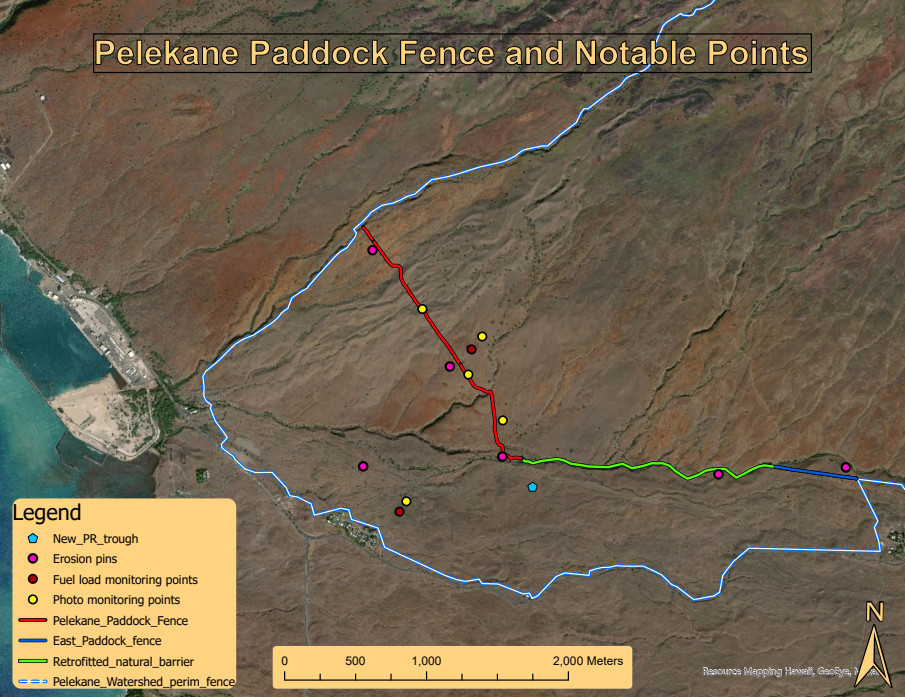 The two-year project complements ongoing efforts to mitigate soil erosion in the region, including watershed protection fencing to maintain the health of native forests located upslope of the project site. It also included education and outreach to keep area residents abreast of the project’s intentions and approaches, while also providing a forum for community members to provide feedback and ideas for future efforts. “A major success of this project was the coordination of project partners in our community,” said Cheryl Ka‘uhane Lupenui, president and chief executive officer of The Kohala Center. “This work follows a long line of projects in Pelekane that show the united efforts of community to reduce erosion and wildfire risks and better care for ‘āina.”