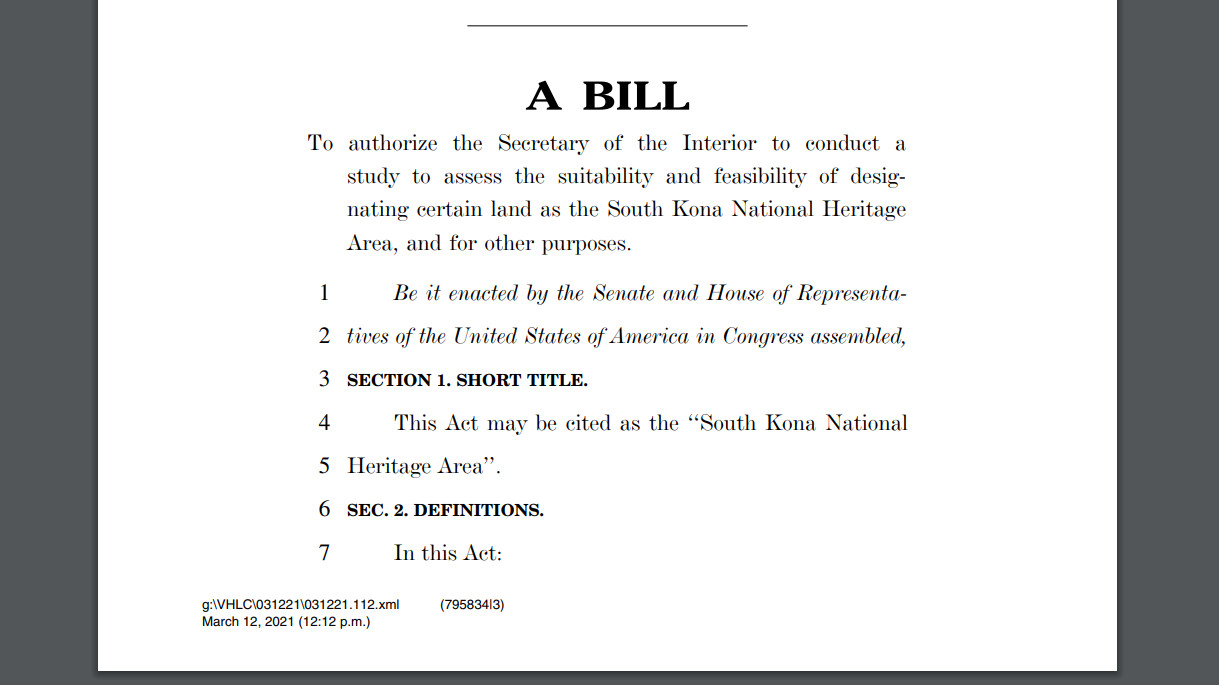 WASHINGTON D.C. - A bill proposed by Congressman Kai Kahele will examine if a National Heritage Area designation would be beneficial for the coastal area between Ka Lae and Honomalino Bay.

(BIVN) – A feasibility study to determine whether or not South Kona should be designated as a National Heritage Areas has the support of Hawaiʻi’s U.S. House delegation.

Congressman Kaialiʻi Kahele (HI-02), who is familiar with the coastal area between Ka Lae and Honomalino Bay, introduced the a measure – along with Congressman Ed Case (HI-01) – to pursue creation of the first National Heritage Areas (NHA) in the State of Hawaiʻi.

Since the designation of the nation’s first National Heritage Area in 1984, there are now 55 NHAs nationally but none in the state of Hawaiʻi, the delegation says.

Rep. Case is also reintroducing his measure from the just-concluded 116th Congress for a similar designation for Kaʻena Point on the Island of Oʻahu.

The South Kona area that could be under consideration “is host to some of the richest and most well-preserved cultural aspects of Hawaiʻi’s history along with invaluable and unique environmental and natural resources,” Kahele said.

“The South Kona coastline has some of the most unique historical, cultural, and archaeological features on the planet,” said Rep. Kahele, who has roots in the South Kona fishing village of Miloliʻi. “This bill can ensure the conservation and preservation of this area in its current natural state and begin the federal process of a National Heritage Area designation.”

(National Heritage Areas) offer federal assistance of joint efforts to manage NHAs for specific protections and uses appropriate to each. Kahele and Case emphasized that any studies for South Kona and Kaʻena Point would fully involve all engaged communities in charting the overall plan for protection and use of these unique parts of the rich heritage of our country.

“The South Kona coastline still retains so much of the unique cultural, historical and physical essence of the real Hawaiʻi,” said Rep. Case, a member of the House Committee on Natural Resources with jurisdiction over NHAs. “It holds a special place in my heart from my own small kid times there and fully needs and deserves the assistance of an NHA.”