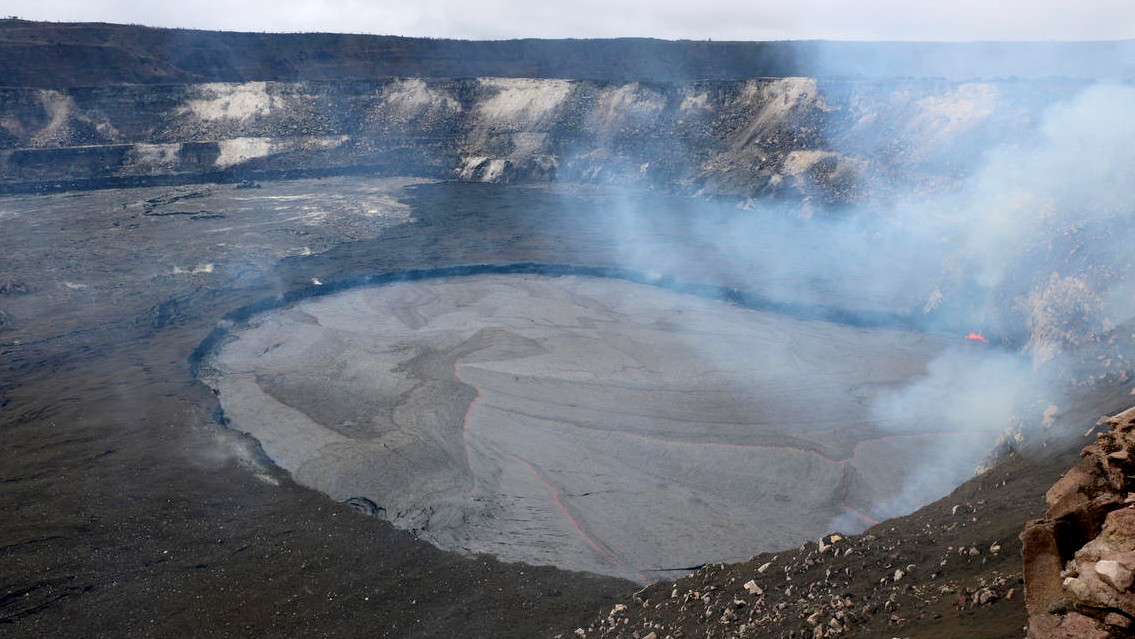 USGS photo from April 21, 2018 of the Kilauea summit lava lake from the Halemaʻumaʻu rim. There have been many dramatic changes at the summit in the three years since this image was captured.

VOLCANO WATCH: The Rise and Fall of Lava Lakes

HAWAIʻI VOLCANOES NATIONAL PARK - Scientists note the current lava lake "is fundamentally different" than the lake that was present before 2018. 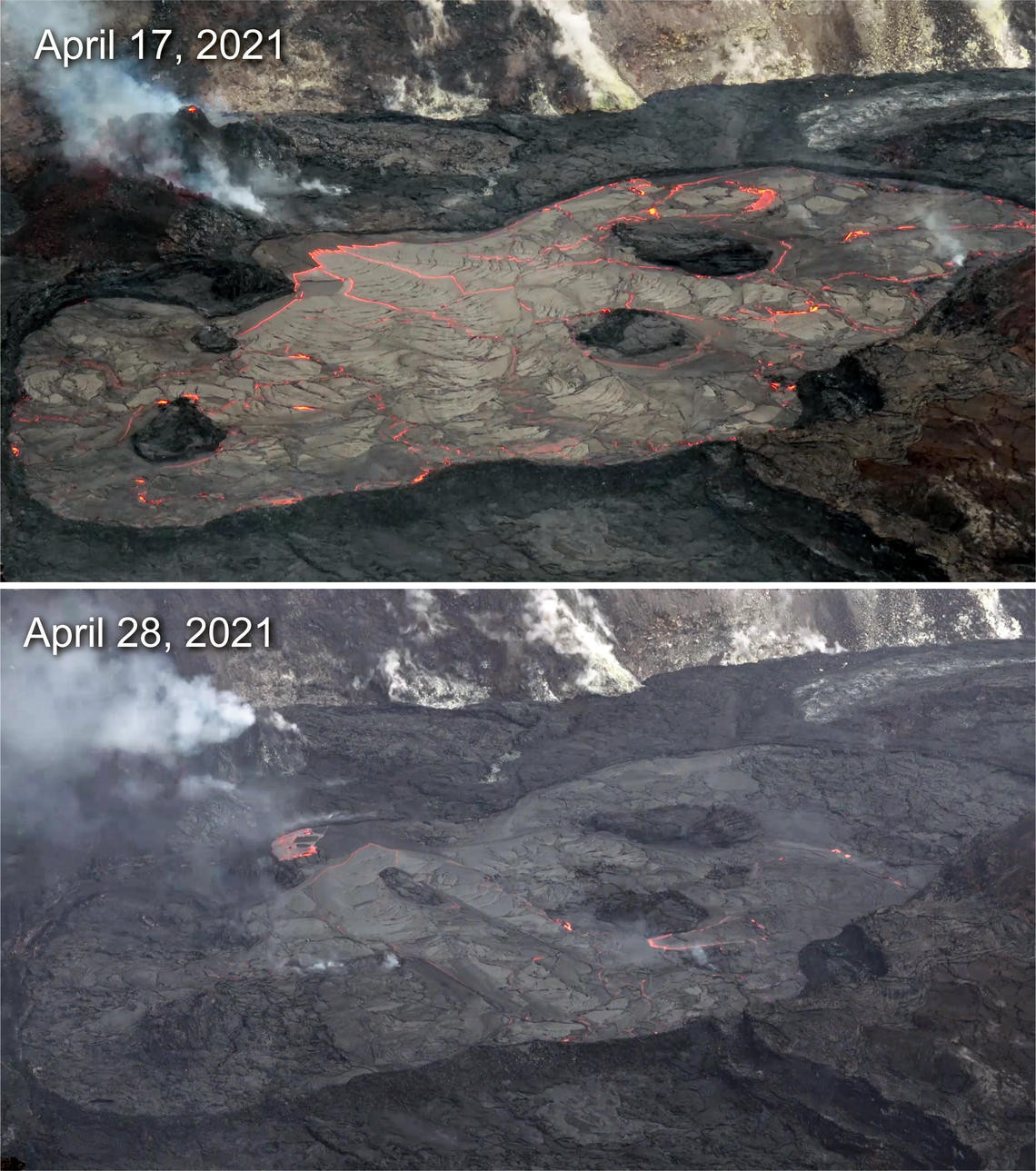 Currently, the lava lake in Halema‘uma‘u crater remains active, “but the area of active surface lava has diminished over the past two weeks,” the USGS Hawaiian Volcano Observatory reports. This image compares photos – both taken by geologist Matt Patrick – from April 17, when active lava extended to the levees along most of the perimeter, to April 28, when only the central portion remained active and very little surface lava reached the levees.

(BIVN) – As the eruption at the summit of Kilauea continues, scientists are looking back at the start of the 2018 eruption on the lower East Rift Zone, which coincided with dramatic changes at the Halemaʻumaʻu.

May 3rd marks three years since the start of the devastating lower East Rift Zone eruption of Kīlauea. In 2018, rising summit lava lake levels, caused by building magmatic pressure, culminated in a large eruption on the lower flank which then abruptly drained the summit lava lake and initiated crater collapse.

Remarkably, nearly the same sequence of events also occurred on another Pacific island in 2018. Ambrym, a highly active volcano in the South Pacific nation of Vanuatu, experienced historic changes in 2018 that paralleled those on Kīlauea.

Prior to 2018, the summit caldera on Ambrym Volcano hosted five churning lava lakes. In the weeks prior to the eruption, at least one of the lava lakes showed a significant rise, similar to what happened before Kīlauea’s 2018 eruption.

Earthquakes began at the summit on December 14, and soon magma intruded along Ambrym’s southeast rift zone, creating extensive ground cracking. Within two days, all five lakes had drained and the craters collapsed inwards, as ash plumes rose from the summit.

On December 17, the magma migration stopped. Soon after, residents observed pumice drifting on shore, signaling that a submarine eruption had occurred far down the rift zone. At the summit, a water lake soon replaced one of the lava lakes in the collapsed crater.

Although ground cracking at Ambrym produced damage to buildings in 2018, the eruption could have been more hazardous if it had happened onshore. In 1913, a similar pattern of activity occurred at Ambrym, producing an onshore eruption that destroyed a hospital.

A newly published study on the 2018 Ambrym eruption, written by an international team of scientists, highlights that the rising lake level prior to the eruption was a likely sign of building pressure in the summit magma chamber.

The authors note that this pattern has been documented in detail at Kīlauea, which has a more extensive monitoring network. In essence, summit lava lakes are giant pressure gauges of the underlying magma chamber, akin to a liquid barometer.

Analysis of the lava chemistry showed that the magmatic dike at Ambrym had intersected a peripheral, isolated pocket of older magma on its route along the rift zone. This mixing of new and old magma also occurred during the 2018 lower East Rift Zone eruption of Kīlauea, with implications for eruption rates and hazards.

The Ambrym and Kīlauea observations suggest that rapidly rising summit lava lakes may be a common harbinger of upcoming flank eruptions. Taken together, the eruptions at Kīlauea and Ambrym have some important lessons for hazard forecasting.

This process has implications for hazards at yet another volcano that is known for lava lake activity. Nyiragongo, in the Democratic Republic of the Congo, hosts a large summit lava lake that has been intermittently active for decades.

Rising lake levels preceded large flank eruptions in 1977 and 2002 at Nyiragongo. The 1977 eruption produced unusually fast lava flows, killing scores of people. Lava flows from the 2002 eruption covered a large portion of the city of Goma, leaving 120,000 people homeless and displacing many more.

Currently, the Nyiragongo lake has risen to a high level, roughly similar to that before the 1977 and 2002 eruptions. Another recent study, by a different international team of scientists, has forecast that this could lead to a new flank eruption in several years.

It’s worth noting that the current lava lake at Kīlauea, which started forming in December 2020, is fundamentally different than the lake that was present before 2018. The current lake is lava that is passively ponding at the bottom of Halemaʻumaʻu crater, and isn’t situated directly over the conduit that rises from the magma chamber. This means its lava level changes can’t be used as a pressure gauge in the same manner.

Over the years, communities on Kīlauea, Ambrym, and Nyiragongo have been devastated by eruptions fed by magma draining from their summits. Our hope is to develop a better understanding of these flank eruptions and their precursors, and use that knowledge to reduce risk and improve forecasts in the future.