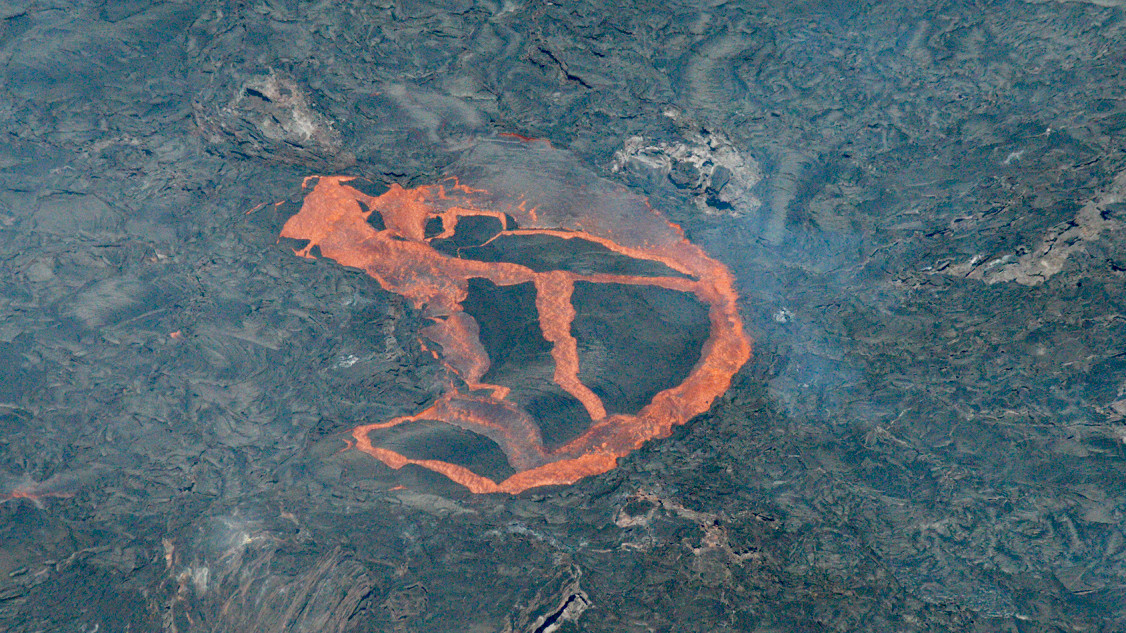 A telephoto view of the active lava surface in Halema‘uma‘u at the summit of Kīlauea. While less frequent than previous weeks, crustal foundering on the active surface of the lava lake persists. Field crews observed this foundering event on Monday afternoon, May 10. It only lasted a few minutes and was approximately 30 m (100 ft) across. USGS photo by B. Carr.

HAWAIʻI VOLCANOES NATIONAL PARK - As the glow from Halemaʻumaʻu diminishes, the National Park Services publishes some new recommendations for the best visitor experience. 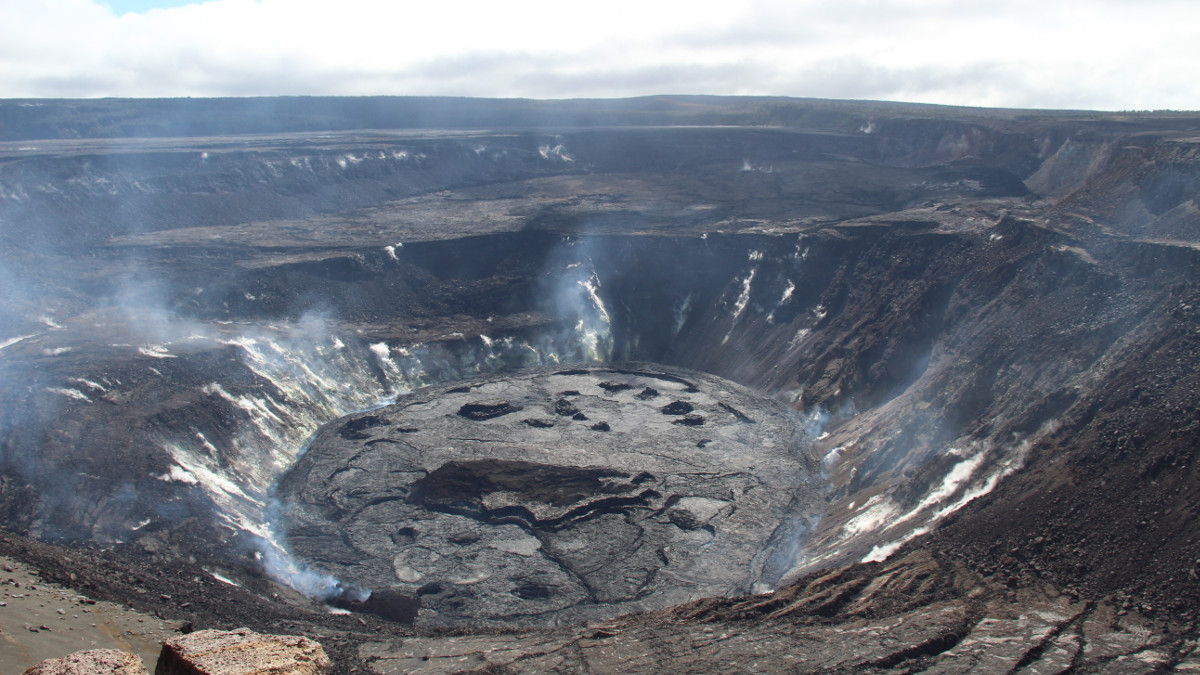 A wide view of Halema‘uma‘u from the western crater rim, at the summit of Kīlauea. The west vent (lower left) continues to supply lava into the lake through a submerged inlet. Much of the western active lava lake surface has crusted over in the last few weeks as the effusion rate remains low. USGS photograph taken by D. Downs on May 12, 2021.

(BIVN) – The eruption at the summit of Kilauea continues, however the lava effusion rate has decreased significantly since mid-April.

In recent weeks, the USGS Hawaiian Volcano Observatory has been reporting on the lower sulfur dioxide emissions – and the gradual stagnation of the lava lake in Halemaʻumaʻu – at the Hawaiʻi island volcano.

Scientists say that on Thursday morning (May 13) the SO2 emission rates were measured at 225 t/day. HVO says this measurement “remains elevated compared to rates (less than 100 t/day) in the months before the summit lava lake eruption started on December 20, but is significantly lower than emission rates that averaged over 800 t/day from mid-February to mid-April.” 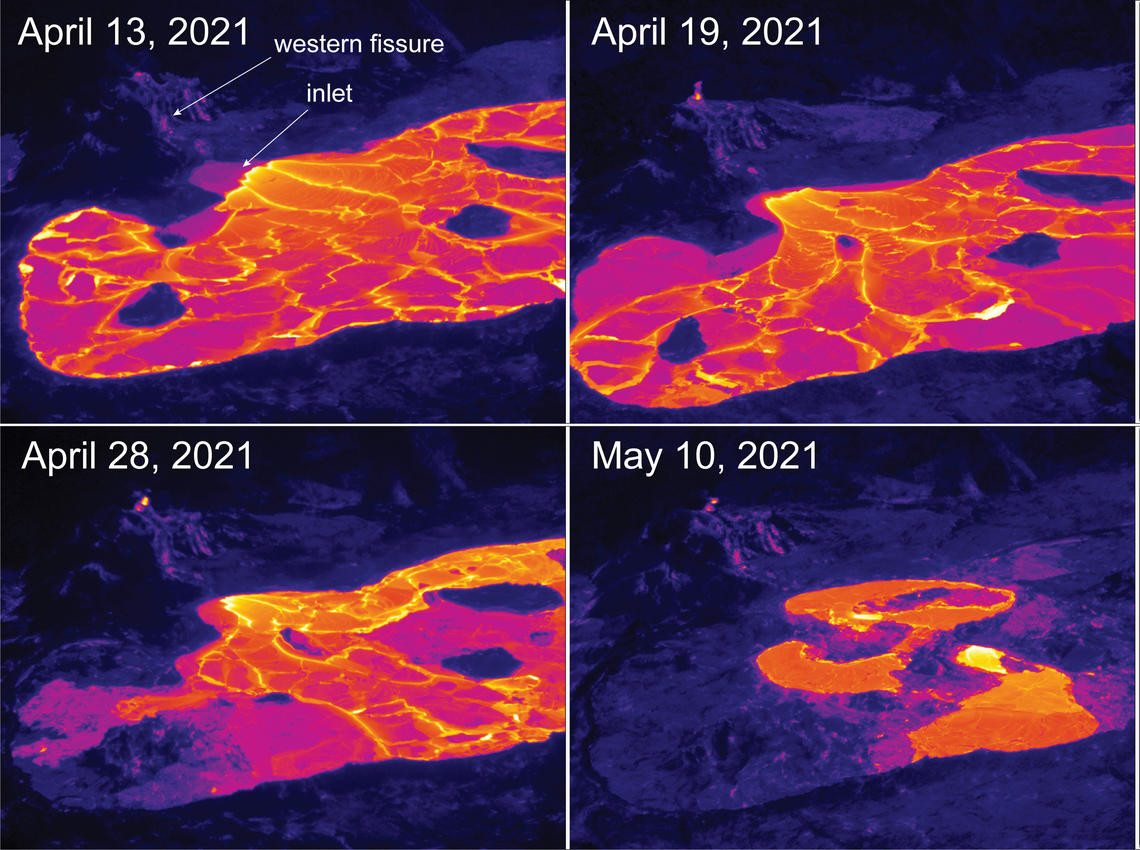 This thermal image comparison shows the diminishing area of active surface lava over the past month in Halema‘uma‘u, at the summit of Kīlauea Volcano. Over this time period, the activity has transitioned from a small lava lake to a series of weak surface flows near the western inlet. USGS images by M. Patrick.

On Thursday, scientists also provided the latest of the lava lake, which is now 229 m, or 751 feet deep. “Stagnant and solidified lava crust covered 93% of the lake surface as measured by thermal mapping on April 16th,” the Observatory wrote. ” Lava effusion from the west vent continues to supply the lava lake within Halema‘uma‘u crater through a submerged inlet to the lake. Lava circulation and intermittent foundering of crust continue in a smaller western portion of the lava lake, and lava has not oozed out along the perimeter of the lake over the past week.” 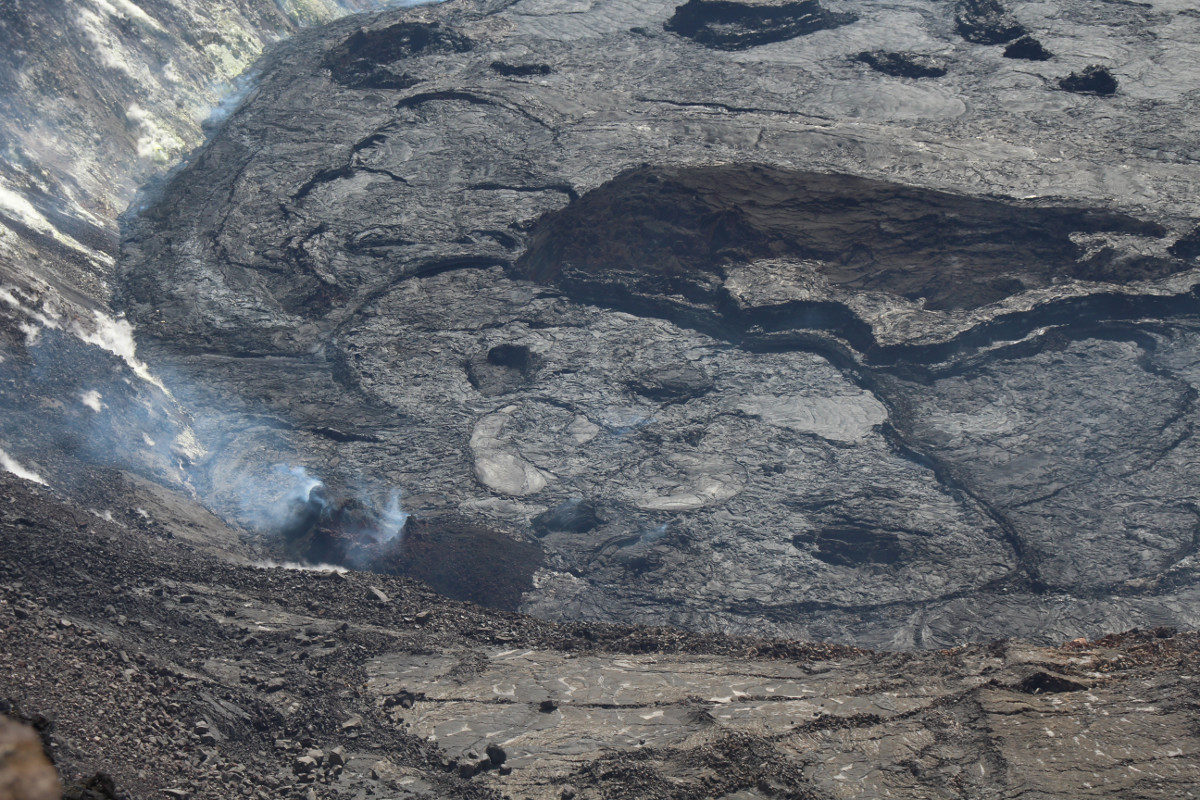 A close up view of the western portion of the lava lake within Halema‘uma‘u, at Kīlauea summit. A weak gas plume is emitted from the western fissure vent (left), with the most recent sulfur dioxide emission rate measured at 150 tonnes per day on May 11. USGS photograph taken by D. Downs on May 12, 2021 from the west rim of Halema‘uma‘u.

Summit tiltmeters recorded minor change over the past 24 hours, and seismicity remains stable, with elevated tremor.

The Hawaiʻi Volcanoes National Park today noted the decreased glow at the summit, and updated its What’s Going On With The Volcanoes? webpage with this new information for visitors:

Since mid-April, a decrease in lava activity makes night viewing of the glow difficult to see. For the best experience, visit just before sunrise from vantage points like Wahinekapu (Steaming Bluff), Kīlauea Overlook, Keanakākoʻi, Kūpinaʻi Pali (Waldron Ledge) and other overlooks along Crater Rim Trail. Sunrise views of the caldera never fail to impress if views of the glow are faint before dawn.

“It is common for eruptions to wax and wane or pause completely,” the USGS Hawaiian Volcano Observatory wrote. “It is unclear if the current decrease in activity will continue and conditions around Halema‘uma‘u crater remain hazardous.”