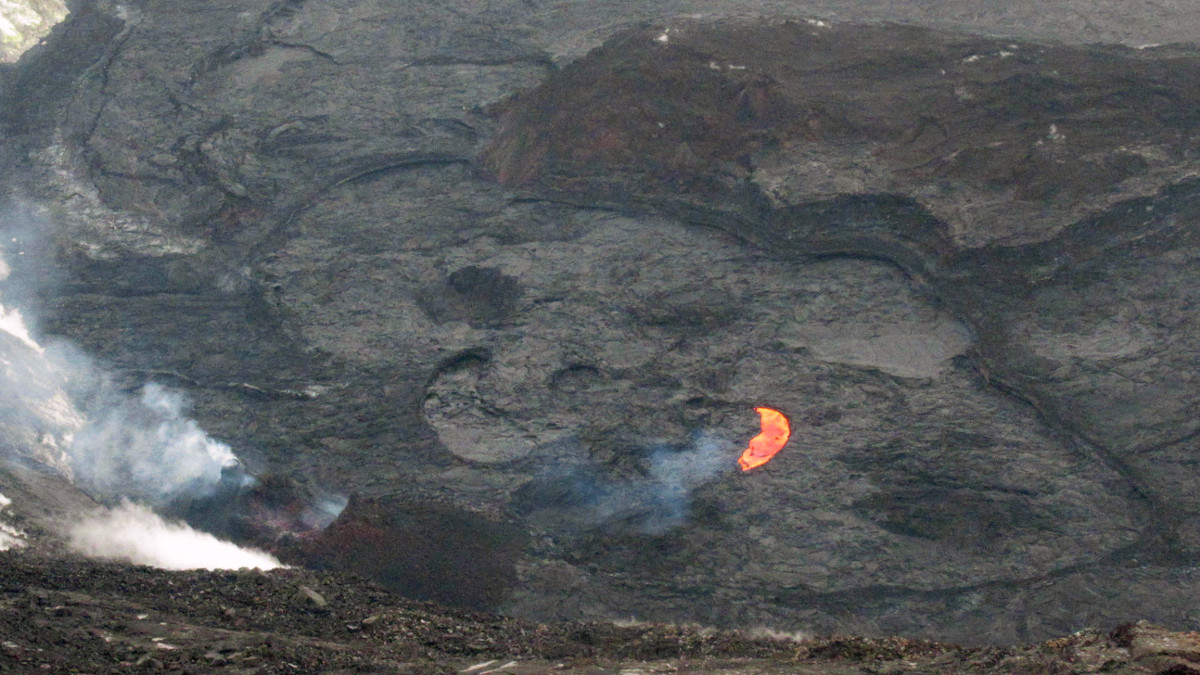 USGS: "A small area of molten lava (orange) was observed within Halema‘uma‘u Crater at the summit of Kīlauea Volcano, Island of Hawai‘i, on May 17, 2021, at 8:55 a.m. HST. Surficial activity was observed in both the northern and southern elongated lobes that were active last week, albeit in smaller areas of the lobes. This photo shows surficial activity in the southern part of the southern lobe." (USGS photo by J.M. Chang) 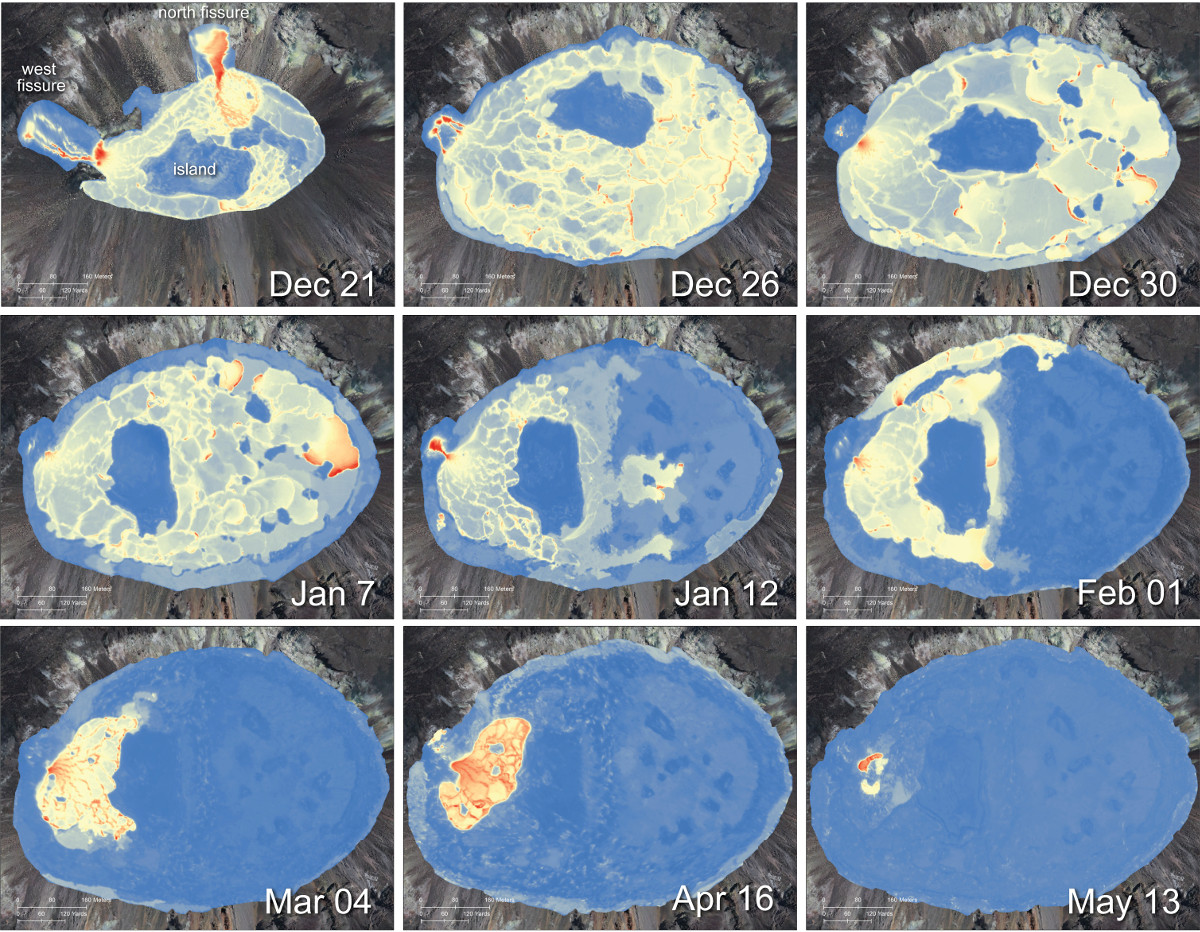 USGS: “This compilation shows nine selected thermal maps created for the ongoing eruption in Halema‘uma‘u, at the summit of Kīlauea, which began on December 20, 2020. The maps show the rapid emplacement and growth of the lake in the initial days. The main island shifts and rotates, presumably controlled by the lake currents. In mid-January, the eastern portion of the lake became solidified at the surface, with active surface lava limited to a diminishing area in the western portion of the lake, near the western fissure. By May 13, active surface lava was less than one percent of the total lake area. The declining area of active lava corresponds with a reduction in eruption rates and gas emissions. The color range shows the relative temperatures across the lake, with blue colors indicative of cooler temperatures and red colors indicative of warmer temperatures.” (USGS maps by M. Patrick and B. Carr.)

(BIVN) – As the current eruption of Kīlauea volcano reaches the five month mark, the new lava lake at the summit is now stagnant over almost its entire surface.

According to the USGS Hawaiian Volcano Observatory, stagnant and solidified lava crust covered 99% of the lake surface as measured by thermal mapping on May 13.

“Lava effusion from the west vent continues to supply the lava lake within Halema‘uma‘u crater through a submerged inlet to the lake,” scientists wrote on Wednesday. “Lava circulation and intermittent foundering of crust are confined to two small pools with rare overflows, and lava has not oozed out along the perimeter of the lake over the past week.” 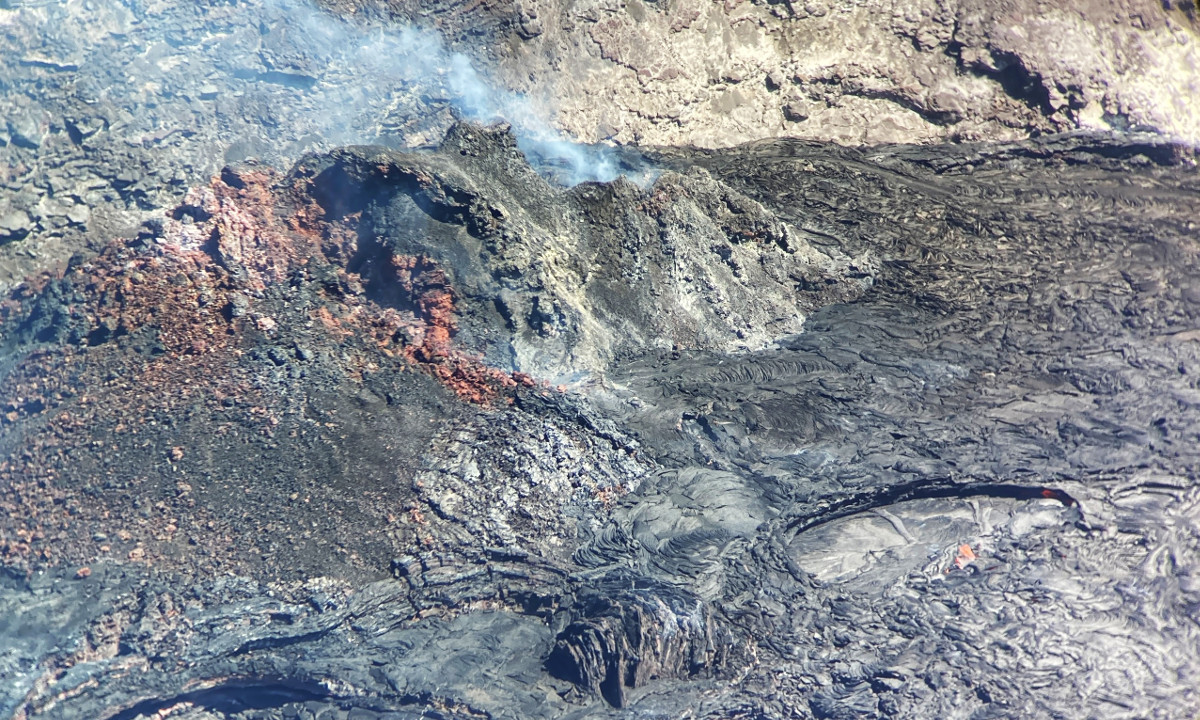 USGS: “This close-up view of the of the Halema‘uma‘u lava lake at the summit of Kīlauea was captured on Tuesday, May 18. During an approximately one-hour visit to the crater rim, USGS Hawaiian Volcano Observatory scientists’ only observation of active lava was the crustal foundering event captured here, which lasted approximately five minutes. All that remains of the active lava lake surface is the smoother kidney-shaped feature around the incandescence in the lower right; the scientists estimated that it measured less than 30 m (98 ft) in length. The remaining lava lake is framed by the western fissure in the left and center of this photo.” (USGS photo)

The USGS also added this information about the sulfur dioxide emission rates, last measured on May 18 at 100 tonnes per day:

Recent SO2 emission rate measurements and geologic observations suggest that the effusion (eruption) rate has decreased significantly since mid-April. This implies a decrease in lava effusion rate that may indicate a coming pause in eruptive activity. Even with decreased effusion rates, conditions around Halema‘uma‘u crater remain hazardous.

There is still no unusual activity noted in the East Rift Zone. “Geodetic monitors indicate that the summit and upper East Rift Zone – between the summit and Puʻuʻōʻō – is refilling at rates similar to those measured over the past 2 years and before the December 2020 eruption,” scientists wrote. “SO2 and hydrogen sulfide (H2S) emissions from Puʻuʻōʻō were below instrumental detection levels when last measured on January 7 2021.”