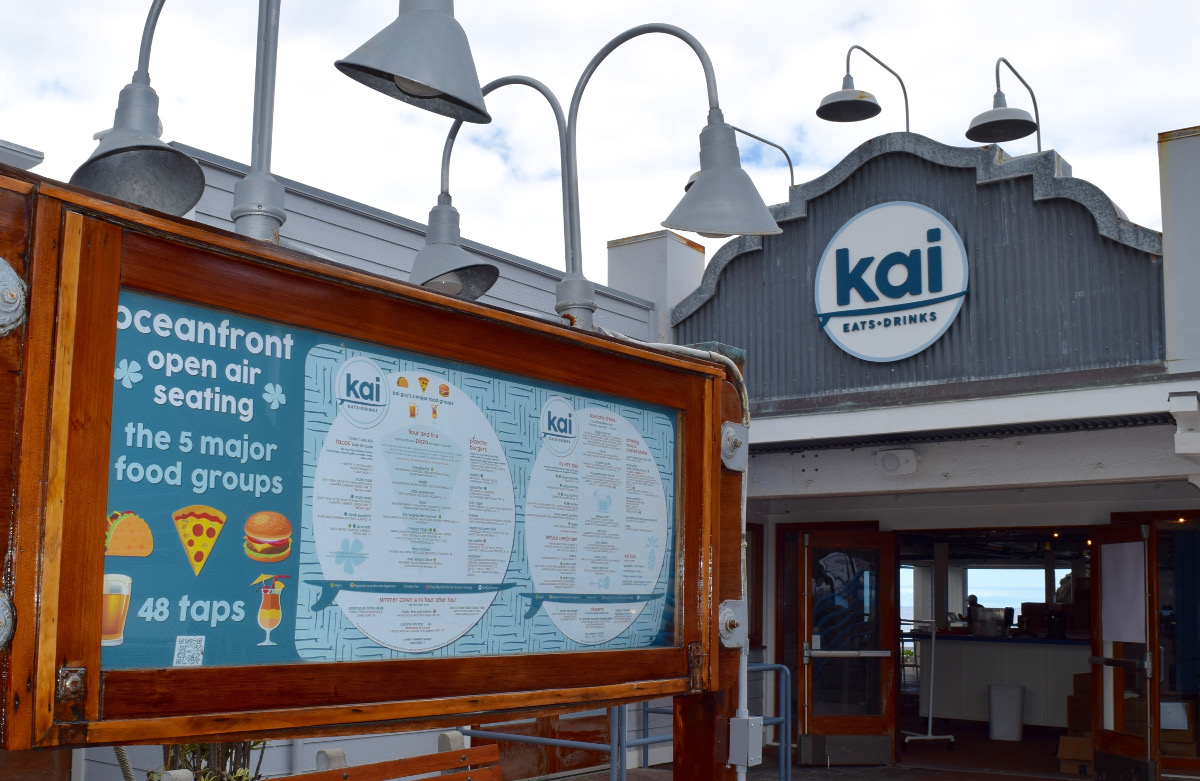 (BIVN) – The Luana Hospitality Group has opened its fifth restaurant in their collection, with the Kai Eats + Drinks starting up this week on Oneo Bay in Historic Kailua Village. It is located on Aliʻi Drive in the former Bubba Gumps location. The space has undergone a major renovation.

“This iconic oceanfront Kona location is the perfect spot for locals, visitors and their families to enjoy a burger, taco and pizza. We have ocean views to die for and sunsets that never quit,” said co-owner Scott Dodd in a Monday news release.

The offerings, part of a “creative menu concept centered on the agreement that the five major food groups are tacos, pizza, burgers, beer and drinks,” are described in the release:

Kai Eats + Drinks brings the ever popular taproom to the front of the house with 48 taps serving craft beers with a balance of IPA, pale ales and lagers, wine, ginger beer and root beer. Its taproom, also known as the employees’ lounge, is enclosed in glass with frosty edges as it cools the taps to just the right temperature.

In the mood for a good burger? Kai burgers are made from custom beef blend served on cute buns to your liking.

Mai Tais are just as enticing. Try the huggo’s Mai Tai, a recipe on the menu since its creation in 1969. Or try a Kai Tai, Coconut Mai Tai or maybe a Dirty Lickens, a Mai Tai made with 6-year old bourbon.

Did we mention dinner entrees? Try Kona’s freshest fish with Hook, Line and Sinker or how about a Black Magic Marinated Flank Steak. The whole family will enjoy the Coconut Shrimp and the Kai Guy’s Dry Rub Baby Back Ribs are to die for.

No time to sit? Soon Kai Eats + Drinks will offer a step up to the window opportunity to grab a slice of pizza, a cup of Kona and continue a stroll on Alii Drive.

“Our mission is to create unique environments with extraordinary experiences to encourage guests to celebrate something every day,” said Dodd. “Kai Eats + Drinks is one of those restaurants that blends atmosphere with great food where locals will love to hang out and bring their friends.”

Kai Eats + Drinks is open daily from 3 pm to 10 pm. The company says hours will expand “to opening at 11:30 am for lunch and early morning for modified breakfast and grab-and-go coffee service.”