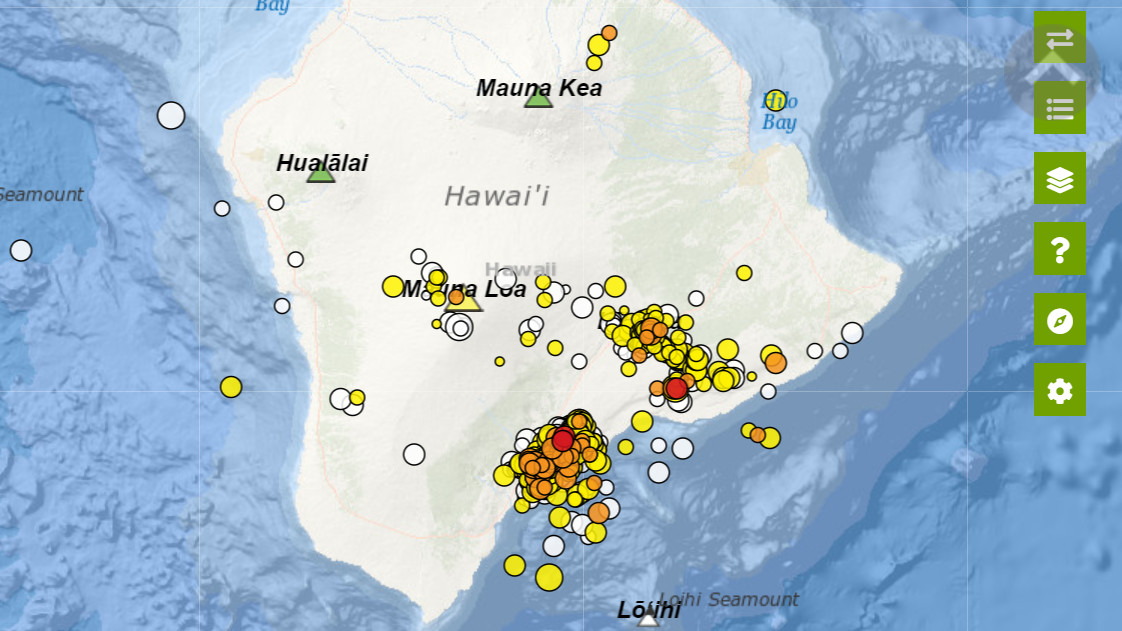 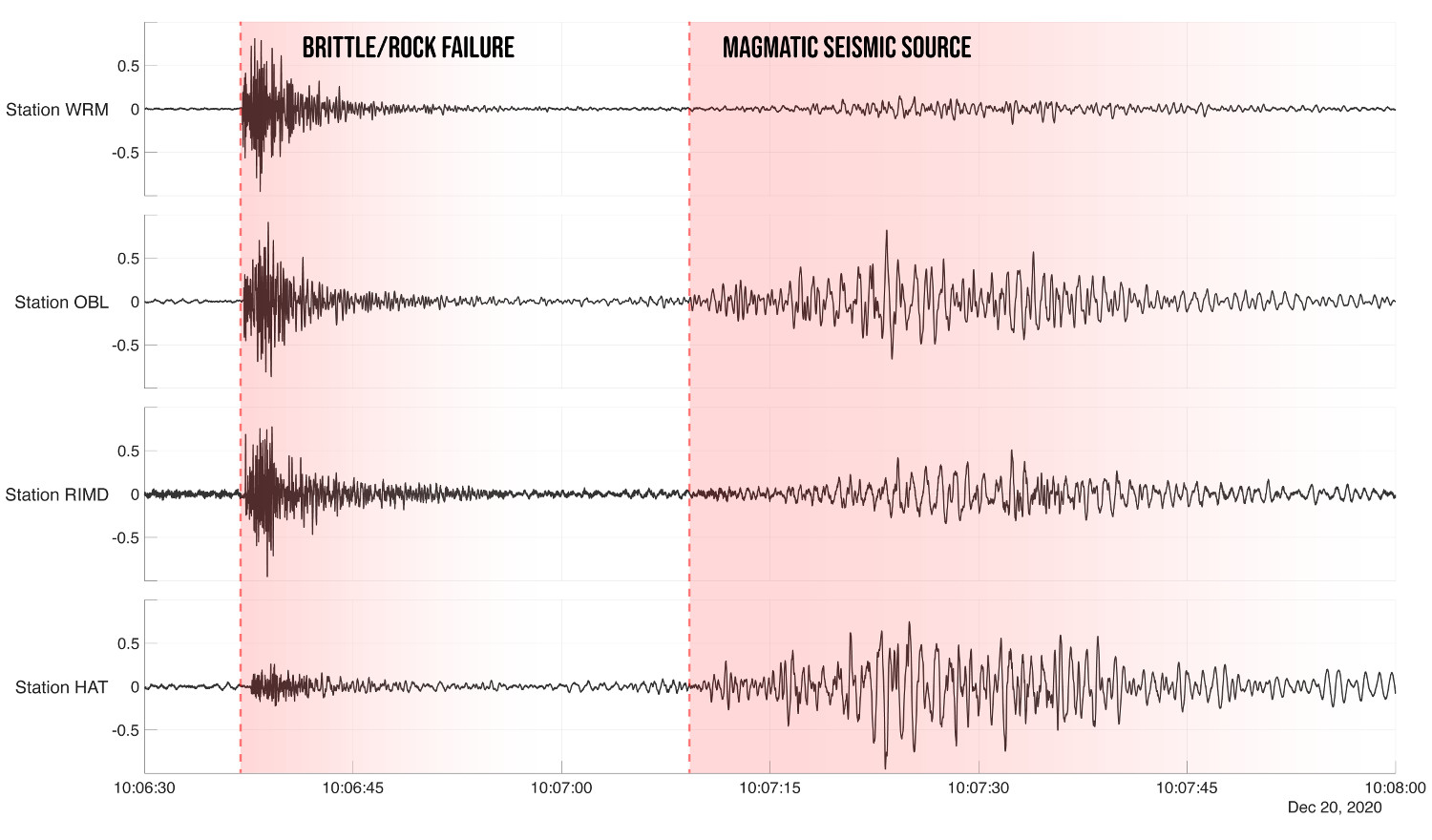 USGS: “Ninety seconds of raw seismic data from four seismic stations around Kīlauea summit. Dates and times, at the bottom of the graph, are in Coordinated Universal Time (UTC). The stations captured two types of seismic signals we typically observe in volcanic settings: (left) a typical tectonic earthquake signal, which results from rocks breaking free and sliding against each other; and (right) a magma-related earthquake signal, which typically results from reverberation of magma. The difference in the frequency of the vibration is starkly noticeable as the magma-related signals (right) have wider-spaced peaks and troughs when compared to the tectonic earthquake signals (left).”

(BIVN) – Neither Kilauea or Mauna Loa volcanoes are erupting. Both are at an ADVISORY alert level, with overall stable seismicity.

In this week’s Volcano Watch article, USGS Hawaiian Volcano Observatory Geophysicist Jefferson Chang writes about the art of monitoring seismicity, and what it can reveal about magmatic activity below the surface. From the article:

The journey from volcanic repose to a climactic eruption is like a mystery movie that keeps you at the edge of your seat. The story is filled with twists and turns that often lead to dead ends.

Earthquakes are a volcano observatory’s early warning system; the first page of action in our page turning story. It’s very difficult to move molten magma through solid rock without making some sort of “noise” or vibration that isn’t picked up by seismometers. So we often “hear” magma coming before it erupts as lava at the surface.

Earthquakes by themselves aren’t enough. Each person at the U.S. Geological Survey’s Hawaiian Volcano Observatory (HVO) plays an essential role in studying, monitoring, and responding to the volcanic hazards on the Island of Hawai‘i. We are all after the same thing—to unravel the clues of volcanic unrest so no one is caught off-guard when the plot turns towards an inevitable eruption.

Fundamentally, we use observations based on the five senses: sight, smell, touch, taste, and sound; but enhanced with modern instrumentation, for continuous and more precise monitoring. Each of these techniques require different sets of skills and background, so we work together to give the public the best information available.

For sight, instead of eyes, we maintain watch with cameras deployed at different places around the island that are likely to give us the first hints of volcanic activity. We also monitor how the ground is moving up and down or sideways, using very precise tiltmeters and GPS instruments that measure changes down to less than a millimeter, or tiny fractions of an inch.

For smell, instead of the nose, we have gas sensors that are tuned to detect volcanic gases. These include carbon dioxide, sulfur dioxide, hydrogen sulfide, and others, which let us know how deep or shallow the magma may be, depending on how much of these gases are escaping to the surface.

For touch, instead of the skin, we monitor temperatures by thermal cameras or temperature probes. Obviously the higher the temperature, the more likely it is that magma is closer to the surface, but in times of an eruption, the temperature of the lava can also tell us where the flow is likely most active and, in turn, most hazardous.

For taste, which is basically a chemistry experiment that involves the tongue (something no one should ever try with lava), we sample rocks and lava in the field to analyze their chemical composition.

For sound, instead of the ears, we listen to the ground with seismometers that can detect vibrations, which the volcanoes emit whenever a fault slips during an earthquake or when magma moves underground. This is where I play my part at HVO as part of a team that monitors the seismicity under the Island of Hawai‘i.

Part of monitoring the seismicity is locating and sizing-up the earthquakes: the ramp-up in the number of detected events is the monologue of volcanic unrest; the large powerful earthquakes are those indelible moments people quote with significant eruptions. For those playing along in the whodunit, these earthquakes statistics seem like a straightforward way to follow the plot.

The lesser-known art of monitoring seismicity deals with magmatic signals. These signals mostly appear as noise with interspersed tectonic events that may help decode what the magma is actually doing. These events are typically undetected by automated computer algorithms (created for tectonically active regions like California) and their sources are notoriously difficult to locate quantitatively, which means they are under-reported in seismic catalogs.

This is where the human ability of pattern recognition becomes indispensable. HVO seismic analysts look at waveform data day in and day out (literally), looking for patterns amidst the seemingly chaotic mess of wiggles to make sense of it all.

Volcano seismology is more than just transcribing earthquakes in tallies or almanacs. Seismic sleuths need to pay attention to the entire soundtrack—this includes the magma-related seismicity that often goes unnoticed but is critical in determining momentum and mood, and ultimately deciphering the eruption story as it unfolds.