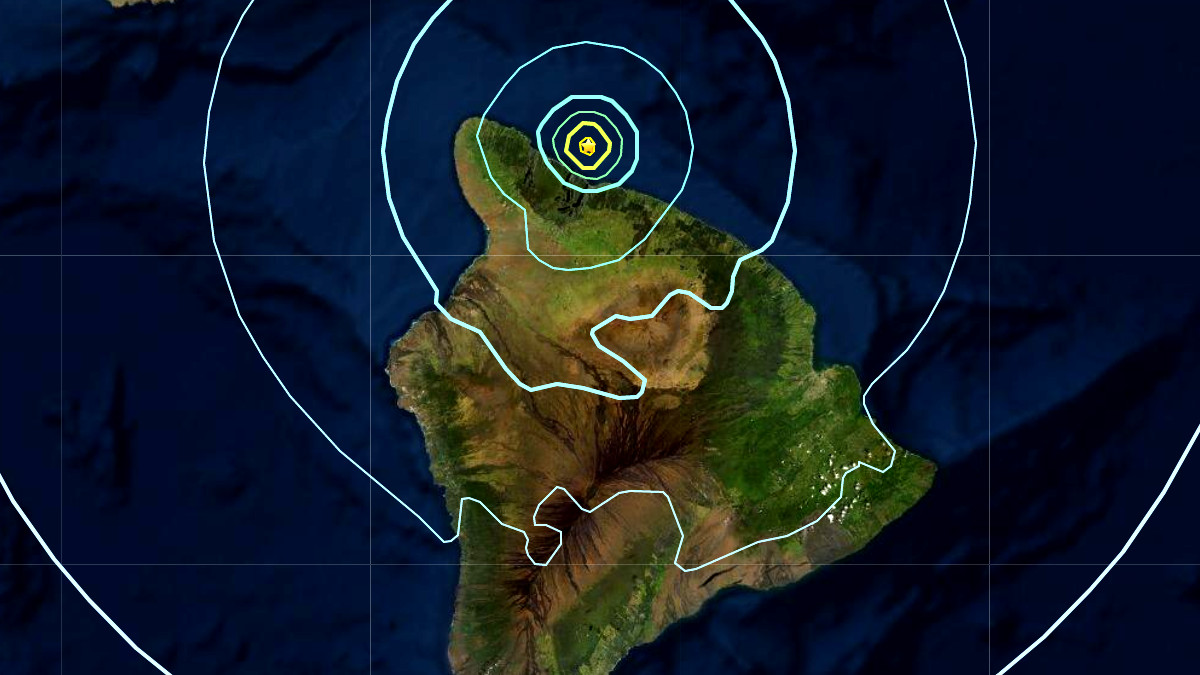 Image of the earthquake location on an interactive map from the USGS.

HAWAIʻI ISLAND - The earthquake occurred at 1:43 p.m. HST on Monday afternoon, and was felt across the Big Island.

The earthquake, measured at a depth of nearly 8 miles, was centered in the ocean off Waipiʻo Valley on Hawaiʻi island, in the area between the Kohala and Hāmākua districts. The quake was first reported as a Magnitude 5.0, but later upgraded to a Magnitude 5.2.

No tsunami was expected from the earthquake, according to a message posted by the Pacific Tsunami Warning Center. However, some areas may have experienced shaking, the emergency statement said.

Preliminary data indicates that the earthquake measuring a magnitude of 5.0 was centered off the coast of Hamakua.

A magnitude-5.2 earthquake located to the north of the Island of Hawai‘i, was recorded by the U.S. Geological Survey’s Hawaiian Volcano Observatory (HVO) on July 5, at 1:43 p.m. HST.

The earthquake was centered less than 5 km (3 miles) north and offshore of Waipiʻo Valley, at a depth of 27 km (17 miles) below sea level. A map showing its location is posted on the HVO website. More details are available at the National Earthquake Information Center website.

Strong shaking, with a maximum intensity of V on the Modified Mercalli Intensity Scale, has been reported across the districts of Kohala. At that intensity, significant damage to buildings or structures is not expected. The USGS “Did You Feel It?” service received 1100 felt reports within the first hour of the earthquake. Felt reports have been reported as far away as Kaua‘i.

According to HVO Scientist-in-Charge, Ken Hon, the earthquake had no observable impact on Kīlauea or Mauna Loa volcanoes. “This earthquake is related to stress from the weight of the island on the underlying ocean crust and mantle. These earthquakes are relatively common and not directly related to volcanic processes. Please be aware that aftershocks are possible and may be felt. HVO continues to monitor Hawaiian volcanoes for any changes. The Alert Levels / Color Codes remain at ADVISORY/YELLOW for Kīlauea and Mauna Loa at this time.”