VIDEO: ʻAlalā Exhibit In Hilo Is Only One In The World

HILO, Hawaiʻi - The endangered Hawaiian crow now has a home at the Panaʻewa Rainforest Zoo. The exhibit opens to the public next week. 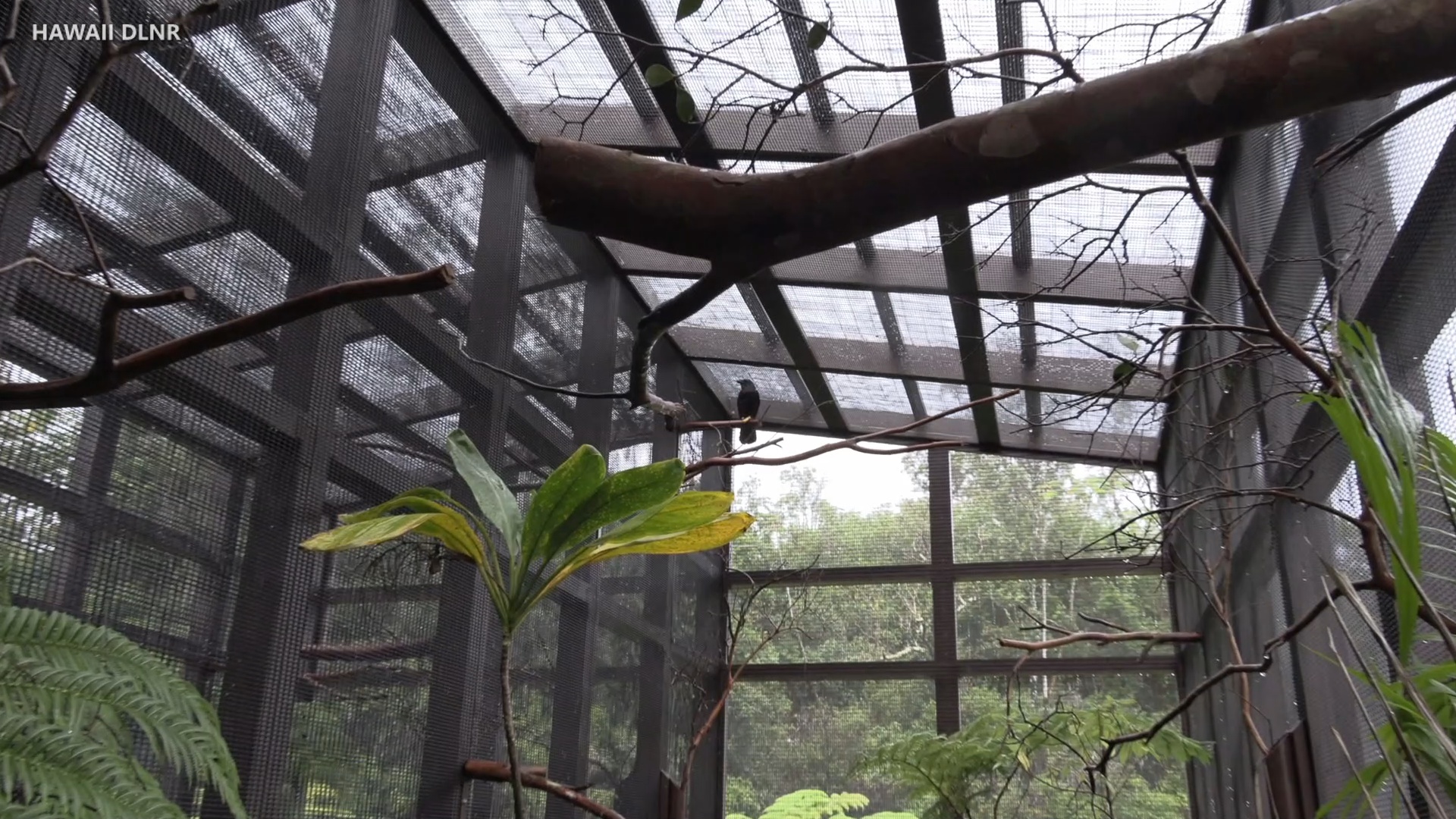 (BIVN) – The endangered ʻalalā – the rare and intelligent Hawaiian crow – now has a home in Hilo, at the Panaʻewa Rainforest Zoo.

“The two birds that are here at the Panaʻewa zoo are two younger males,” said Rachel Kingsley of the ʻAlalā Project. Kingsley spoke in a video released by the Hawaiʻi Department of the Land and Natural Resources, one of the partners in the ʻAlalā Project. “They are single males that are not going to be bred. Their genetics are pretty well represented within the conservation breeding flock already, so their genetics are not needed,” she added.

This unique exhibit will soon be open to the public, once the Hawaiʻi County-operated zoo reopens this month. The funds for the new exhibit were donated by the Friends of the Panaʻewa Zoo.

“These birds are going to acting as ambassadors for the species,” Kingsley said, “and its gonna be a great opportunity for the public to get up-close and personal, to see the ʻalalā, where they might not be able to, otherwise.”

“I just want to mahalo the Friends of the Zoo for the exhibit. Its going to be the only one in the world,” said Director of Parks and Recreation, Maurice C. Messina. “When we open up the zoo on July 19th, this is gonna be – along with the tigers – one of the most visited exhibits.”

The ʻalala was declared extinct in the wild in 2002. In March of 2021, the ʻAlalā Project provided this update on the ongoing effort to recover and reintroduce the species into the wild:

Last October, in response to mortalities of released ʻalalā, including predation by ‘io (Hawaiian hawk), conservationists brought the remaining birds from the Pu‘u Maka‘ala Natural Area Reserve, on Hawaiʻi Island, back in from the wild – returning them to the conservation breeding program at the Keauhou Bird Conservation Center. Released between 2016 and 2019 and having lived in the wild for 2-3 years, these five birds gained knowledge about foraging, predator avoidance, pair bonding, and other social behaviors that could be passed on to the birds residing within the conservation breeding program and aid with future recovery efforts.

Jackie Gaudioso, a wildlife biologist with the DLNR Division of Forestry and Wildlife (DOFAW) and coordinator for the ʻAlalā Project, said, “The partners of The ʻAlalā Project will keep the momentum of Hawaiʻi Island ʻalalā release planning going, as potential release areas undergo supportive habitat management and infrastructure preparations. While self-sustaining populations of ‘alalā on Hawai‘i Island are necessary for the long-term recovery of the species, understanding ʻio behaviors and movements is crucial before we pursue future Hawaiʻi Island releases”.

As the effort to improve success of Hawaii Island reintroductions continues, the Project has begun preliminary work to explore the potential for Maui Nui to serve as an additional release site for ʻalalā. While ʻalalā were historically known to inhabit forests on Hawaiʻi Island, there is subfossil evidence that ʻalalā or a similar species once existed in Maui Nui. Predation by ‘io has been a major challenge to Hawaii Island releases, but ‘io are not present on Maui Nui, providing an opportunity to better understand how ʻalalā can live in a forest where ‘io are not present.

Dr. Fern Duvall, the Maui Nui program manager for the DOFAW Native Ecosystems Protection and Management Program has a long history with the ‘alalā, as far back as the 1980s. “We have forests that are similar to the forest on Hawai‘i Island where ʻalalā were released. There are abundant food resources in our Maui Nui forests; abundant trees that would be suitable for nesting platforms. And we do not have the ʻio predation risk, because we don’t have ‘io here” Duvall said.

The first steps in consideration of a reintroduction of ʻalalā to Maui Nui will be a careful review and assessment of potential sites for releases, as well as outreach and discussion with conservation partners and the community to assess the feasibility of releases. In the coming months, The ʻAlalā Project will be reaching out to conservation partners and community members within Maui Nui to evaluate habitat suitability and support for future releases.

Hawaiian hawk (ʻio) research will also be conducted at the previous and at additional potential release areas on Hawaiʻi Island over the next few years to inform future Hawai‘i Island releases and to support release implementation. The research topics include species’ distribution, movements, and monitoring the behaviors of individuals.

Bryce Masuda, Conservation Program Manager of the San Diego Zoo Wildlife Alliance’s Hawai‘i Endangered Bird Conservation Program said, “We are excited to move forward with the next steps for the recovery of ʻalalā together with the community. As we have seen with the recovery of other endangered species, successful programs must problem solve – incorporating new strategies and applying science to achieve thriving populations of wildlife.”

For now, on Hawaii island, the Panaʻewa Rainforest Zoo will be the only place to catch a glimpse of this rare creature.

“I think its a great opportunity to learn who the ʻalalā are, and what their story is,” said Kingsley. “They are a unique species. Theyʻre really a great presence in our forest.”