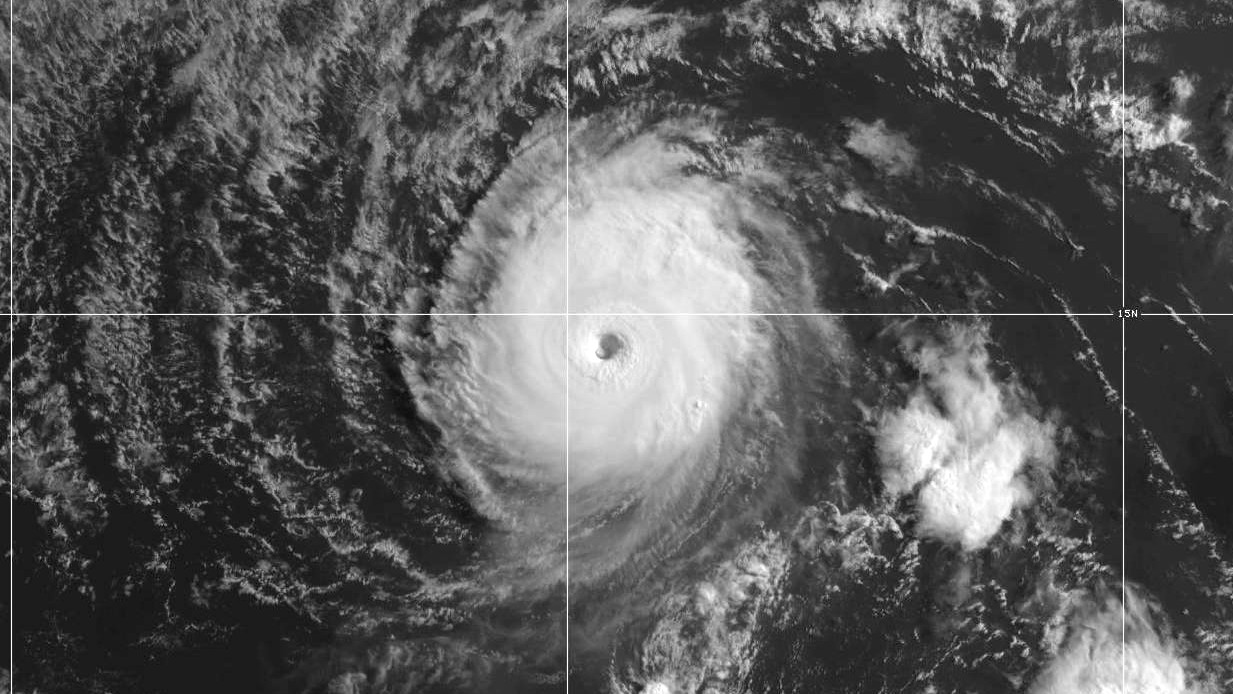 HONOLULU, Hawaiʻi - Felicia is forecast to move into the Central Pacific on Tuesday night as a tropical storm. 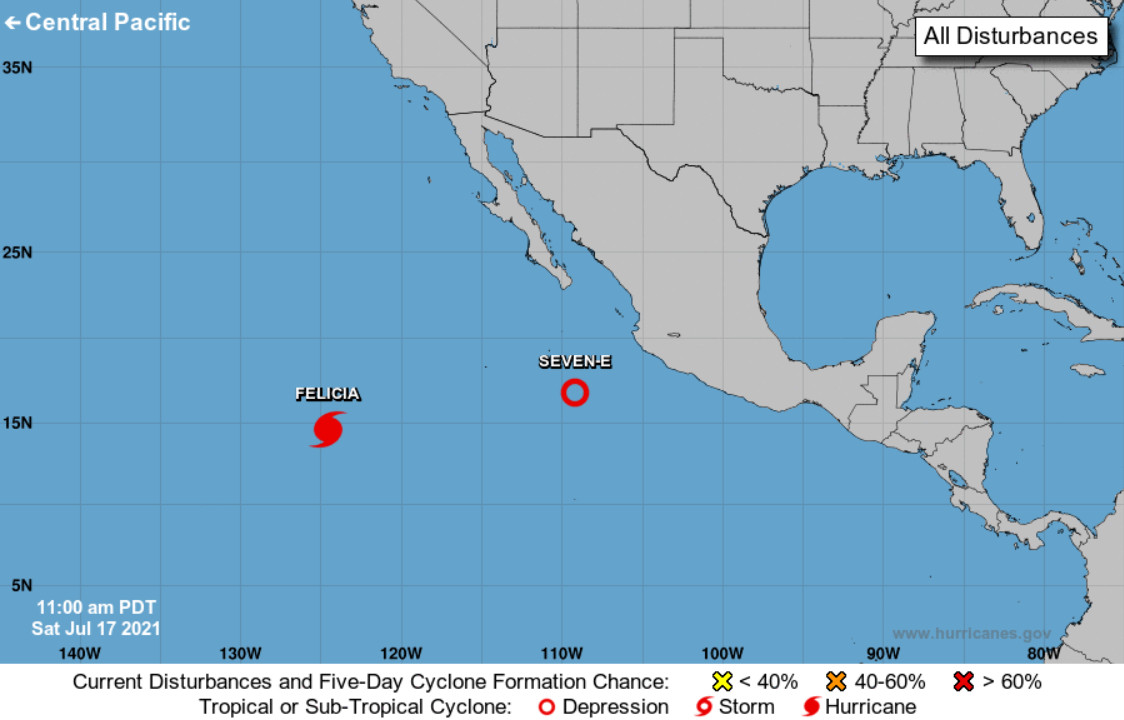 (BIVN) – Hurricane Felicia has intensified, and continues to move west in the Eastern Pacific.

Forecasters describe Hurricane Felicia as “tiny but ferocious”. Felicia is a small hurricane, but with maximum sustained winds measured at 145 mph, the storm is a strong category 4 hurricane on the Saffir-Simpson Hurricane Wind Scale. “Fluctuations in intensity are possible today, and slight weakening is forecast by the end of the weekend,” the National Hurricane Center said. “A faster rate of weakening is expected by early next week.” 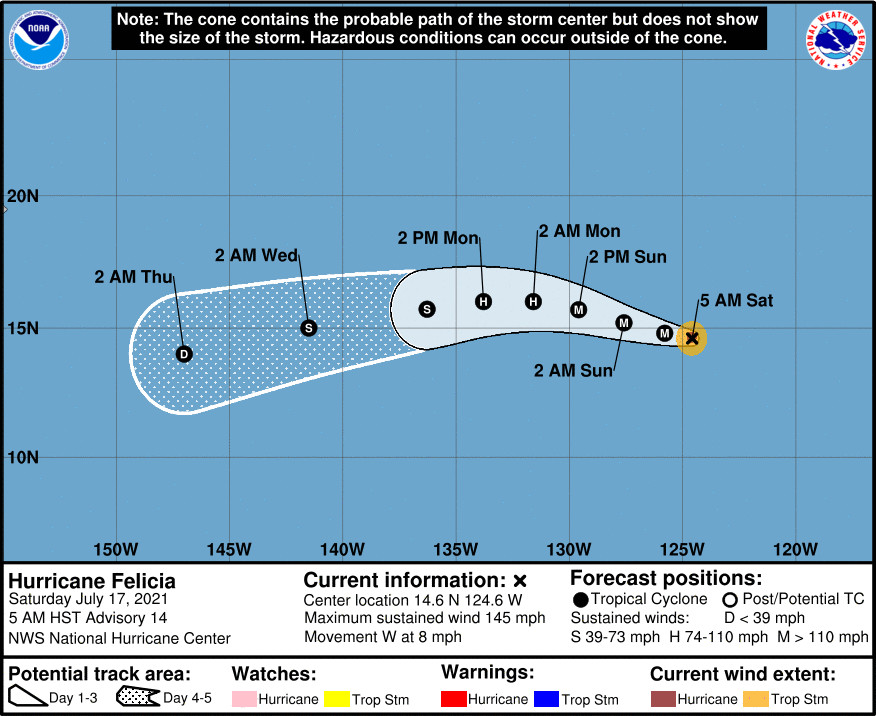 There are no coastal watches or warnings in effect for Felicia, which was 2,035 miles east southeast of Hilo as of 5 a.m. HST. Felicia is forecast to move into the Central Pacific Hurricane Center area of responsibility Tuesday night as a tropical storm.

From the National Hurricane Center discussion at 5 a.m. HST:

Felicia provided another surprise early this morning, with a ring of very cold cloud tops (<-70 deg C) developing around the clear eye of the tiny hurricane. The 12Z TAFB Dvorak analysis was T6.5/127 kt and that is the basis for the 125 kt intensity estimate. Cloud tops have warmed ever so slightly since 12Z, but the hurricane’s satellite presentation remains very impressive.

Due to the higher initial intensity, the first 36 h of the intensity forecast has been increased as well. Slight weakening is anticipated by tonight as Felicia begins to move over marginally cool SSTs. Internal factors such as eyewall replacement cycles are also possible with any major hurricane and could result in shorter-term intensity changes that are not reflected in the forecast. By around 48 h, Felicia is forecast to move over waters below 26 deg C, and some models like the ECMWF and HWRF also indicate it could begin to encounter less favorable upper-level winds. If that solution bears out, Felicia could weaken even faster than indicated since the surrounding environment is fairly dry and the hurricane’s small size makes it particularly susceptible to rapid intensity changes. The NHC intensity forecast is on the high side of the guidance envelope through 36 h and near the intensity consensus by the end of the 5-day period. It is worth noting that confidence is high that Felicia will weaken dramatically by the end of the forecast period, but considerable uncertainty remains in the details of exactly when and at what rate it will happen.

Only a slight northward adjustment was made to the track forecast. Felicia is currently moving westward near 7 kt, and that general motion will likely continue today. The dynamical guidance is in good agreement that small fluctuations in ridging to the north of Felicia should allow the hurricane to turn west-northwestward by Sunday, and then back toward the west in about 48 h. An extensive deep-layer ridge centered over the central Pacific should then cause Felicia to gradually accelerate west-southwestward through the end of the forecast period. The updated NHC track forecast is near but just south of the TVCE and HCCA consensus aids.

Behind Felicia, a new tropical depression has formed.

Tropical Depression Seven-E is about 425 miles south of the southern tip of Baja California, moving west northwest at 17 mph. Gradual strengthening is forecast during the next few days, and the depression is expected to become a tropical storm later today, forecasters say.