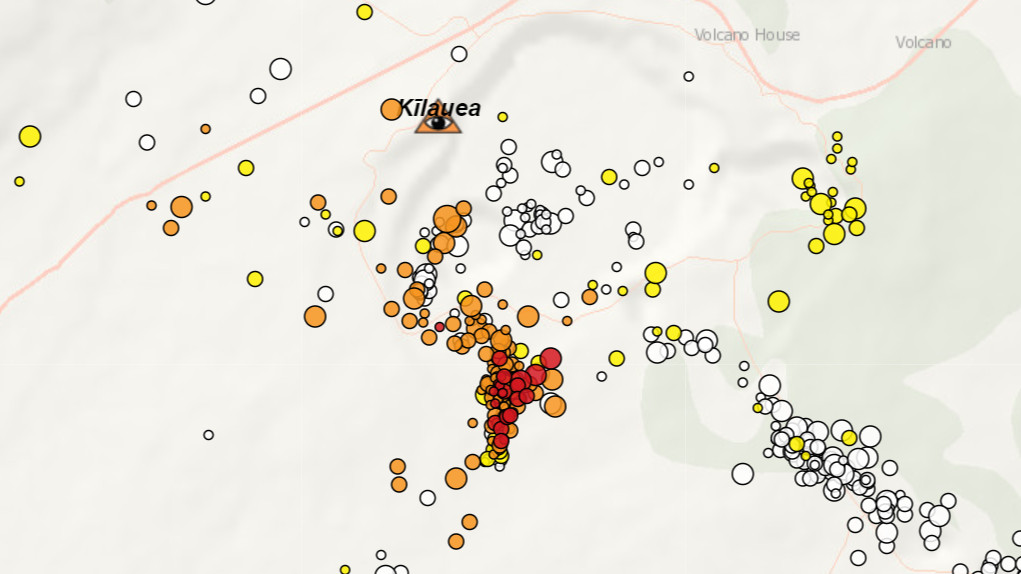 Image from interactive USGS map showing the location of the swarm of earthquakes at the summit of Kīlauea. The most recent earthquake locations are in red.

HAWAIʻI ISLAND - Over 140 earthquakes have been recorded at the summit of Kīlauea as of 4:30 a.m. on Tuesday.

Kilauea Volcano Alert Level Raised To WATCH, Earthquake Swarm (Aug. 24, 2021). A synthesized voice was utilized in the narration for this story.

Volcanic Activity Summary: Kīlauea volcano is not erupting. A swarm of earthquakes beneath the south part of Kīlauea caldera, within Hawaiʻi Volcanoes National Park, began on the evening of August 23, 2021. The swarm continues into the early morning hours of August 24 with a particularly strong sequence of earthquakes that occurred at about 1:30 a.m., HST. The onset of the earthquake swarm was coincident with a change in the style of ground deformation at tiltmeters in the Kīlauea summit region, potentially indicating the shallow movement of magma beneath the south part of Kīlauea caldera.

The US Geological Survey Hawaiian Volcano Observatory is raising the volcano alert level/aviation color code for Kīlauea from Advisory/Yellow to Watch/Orange due to this activity.

HVO will continue to monitor this activity closely and adjust the alert level accordingly.

HVO is in constant communication with Hawai‘i Volcanoes National Park as this situation evolves. The activity is confined entirely within the park.

The US Geological Survey Hawaiian Volcano Observatory has detected an increase in earthquake activity beneath the south part of Kīlauea summit caldera, within Hawaiʻi Volcanoes National Park. The activity began around 4:30 p.m., HST, on August 23 and continued through the night and into the early morning of August 24, 2021. The swarm was accompanied by an increase in the style of ground deformation recorded by the Sandhill tiltmeter, just to the west of the earthquake swarm location. The same tilt increase was also recorded by the tiltmeter near Uēkahuna Bluff and the site of the old HVO building.

At about 1:30 a.m. this morning, the swarm of earthquakes intensified in this region; this activity may indicate an intrusion of magma occurring 1–2 km (0.6–1.2 miles) beneath the south caldera.

Currently, webcams and satellite imagery show no evidence of lava at the surface. HVO scientists will continue the monitor the situation and will issue additional messages and alert level changes as warranted by changing activity.