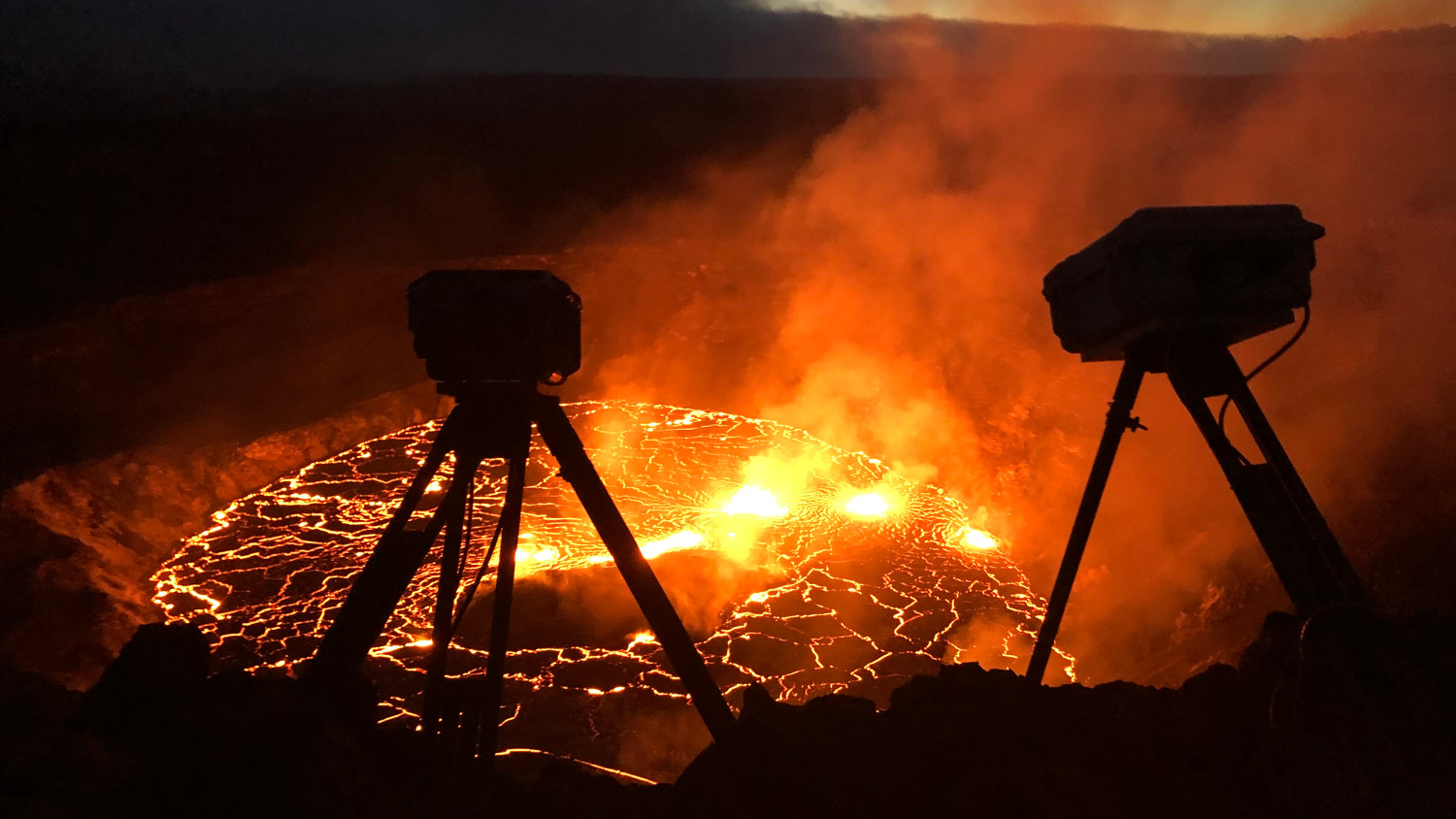 USGS:"Photo of the new lava lake within Halema'uma'u crater at Kīlauea summit taken early in the morning on September 30. This view from the northwest rim of Halema'uma'u shows two webcams facing the new eruption, with fissures producing lava that is accumulating within the crater. USGS Hawaiian Volcano Observatory scientists continue to monitor the ongoing eruption from within an area of Hawai'i Volcanoes National Park that remains closed to the public due to safety concerns." (USGS photo taken by L. Gallant.)

HAWAIʻI VOLCANOES NATIONAL PARK - So far, high eruption rates have been accompanied by huge releases of volcanic gases, as lava returns to Halemaʻumaʻu. 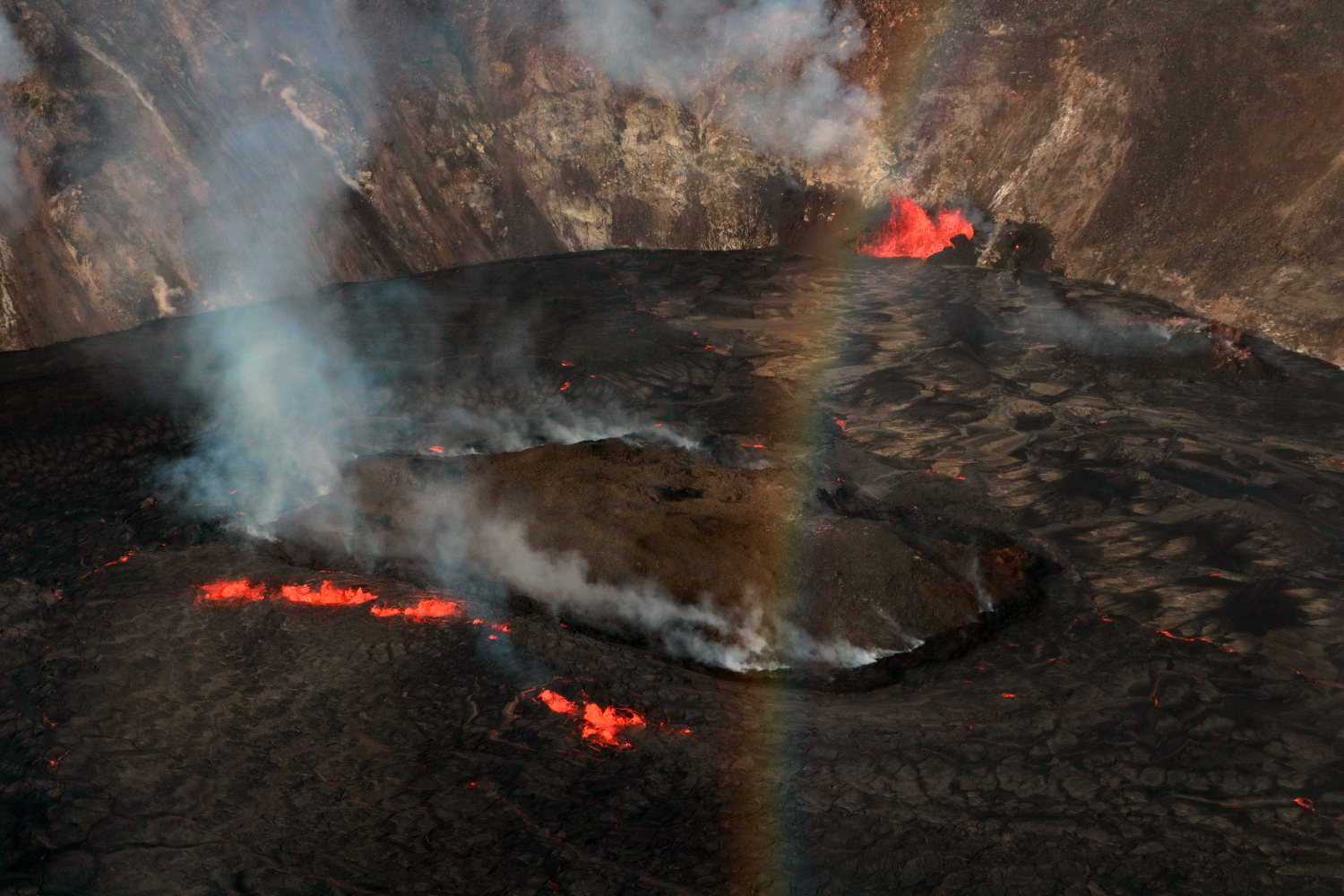 USGS: “Telephoto aerial image of eruption in Halemaʻumaʻu at Kīlauea Volcano’s summit taken during an overflight at approximately 7:30 a.m. HST on September 30, 2021. A series of fountains in the central portion of the lava lake are visible, as well as the prominent vent in the west wall of Halemaʻumaʻu. The island, which formed during the early phase of the December 2020-May 2021 eruption within Halemaʻumaʻu, remains above the new lava lake surface and is visible in the center of the photo.” (USGS image by K. Mulliken)

(BIVN) – Kīlauea volcano is erupting. The USGS Hawaiian Volcano Observatory reported that lava continues to erupt from multiple vents along the floor and western wall of Halemaʻumaʻu crater.

All lava activity is confined to the summit within Hawaiʻi Volcanoes National Park, and seismicity and volcanic gas emission rates remain elevated.

The new eruption is the subject of this week’s Volcano Watch article, written by USGS HVO scientists and affiliates:

Like the prior eruption that began in December 2020, this new activity is confined entirely within Halemaʻumaʻu. The new lava is continuing to fill the crater that collapsed in 2018 and is creating a new lava lake on top of the older one. Similar lava lakes frequently formed after collapse events in Halemaʻumaʻu in the 1800s. This pattern of summit collapse and subsequent lava lake filling is one that Kīlauea has exhibited in the past.

Both the December 2020 eruption and current eruption were immediately preceded by about an hour of elevated seismicity beneath Halemaʻumaʻu. However, increased earthquake activity in the summit or upper East Rift Zone—as well as intrusions of magma beneath the summit region—provided clues of increased eruption potential prior to the eruptions.

A swarm of earthquakes began in the upper East Rift Zone beneath Pauahi Crater just before midnight on September 28 and alerted HVO seismologists to an increase in activity. Overnight, smaller earthquakes were recorded closer to the summit followed by a smaller swarm near Puhimau Crater on Chain of Craters road within Hawai‘i Volcanoes National Park. After a relatively quite morning on September 29, earthquake activity abruptly increased beneath Kīlauea’s summit around 2:00 p.m. About 30 minutes later the intensity, frequencies, and shallowness of earthquakes coupled with rapid changes in ground deformation patterns, indicated magma was moving upward beneath Halemaʻumaʻu.

Summit tiltmeters began to record a higher rate of inflationary tilt during the 40 minutes preceding the start of the eruption; a total of 11 microradians at the nearest instrument. After the onset of the eruption, the tilt changed to a steady deflationary trend that is continuing.

Immediately before lava erupted, uplift of the older, solidified crust was seen in a few webcam image frames in the area where the fissures opened. The initial fissure cut across the middle of the Halemaʻumaʻu crater floor and was followed about an hour later (around 4:40 p.m.) by a fissure with several vents on the western wall of Halemaʻumaʻu. Multiple active vents continue to feed the growing lava lake that has risen approximately 20 m (65 ft) since the eruption started. The tallest lava fountain, near the southern end of the lava lake, has been measured at sustained heights of approximately 20–25 m (65–82 ft) throughout the night and into the morning of September 30th. A helicopter overflight on September 30, 2021, at approximately 7:30 a.m. HST allowed for aerial visual and thermal imagery to be collected of Halema‘uma‘u crater at the summit of Kīlauea. This thermal map shows a closer view of the new lava lake within Halema‘uma‘u. The scale of the thermal map ranges from blue to red, with blue colors indicative of cooler temperatures and red colors indicative of warmer temperatures. The dimensions of the new lava lake are 980 m (1070 yd) E-W axis and 710 m (780 yd) in N-S axis. The estimated area of the lake is about 52 hectares (127 acres). USGS map by M. Patrick.

A preliminary calculation of the average eruption rate so far was approximately 120 cubic meters (4,238 cubic ft) per second resulting in a total erupted volume of roughly 10 million cubic meters (350 million cubic ft). These high eruption rates are accompanied by huge releases of volcanic gases—especially sulfur dioxide (SO2)—which is one of the primary hazards related to summit eruptions. Initial rates of SO2 emissions were measured at about 85,000 tonnes per day just after the start of the eruption.

The opening phases of eruptions can be unpredictable before the eruptive vents stabilize and HVO staff continue to monitor the ongoing eruption for any future changes. And while it’s not possible to predict exactly how long the current eruption may last, we expect that more summit and upper rift zone eruptions are likely in the coming years as Kīlauea continues to re-pressurize and re-establish magma pathways after the 2018 eruption.