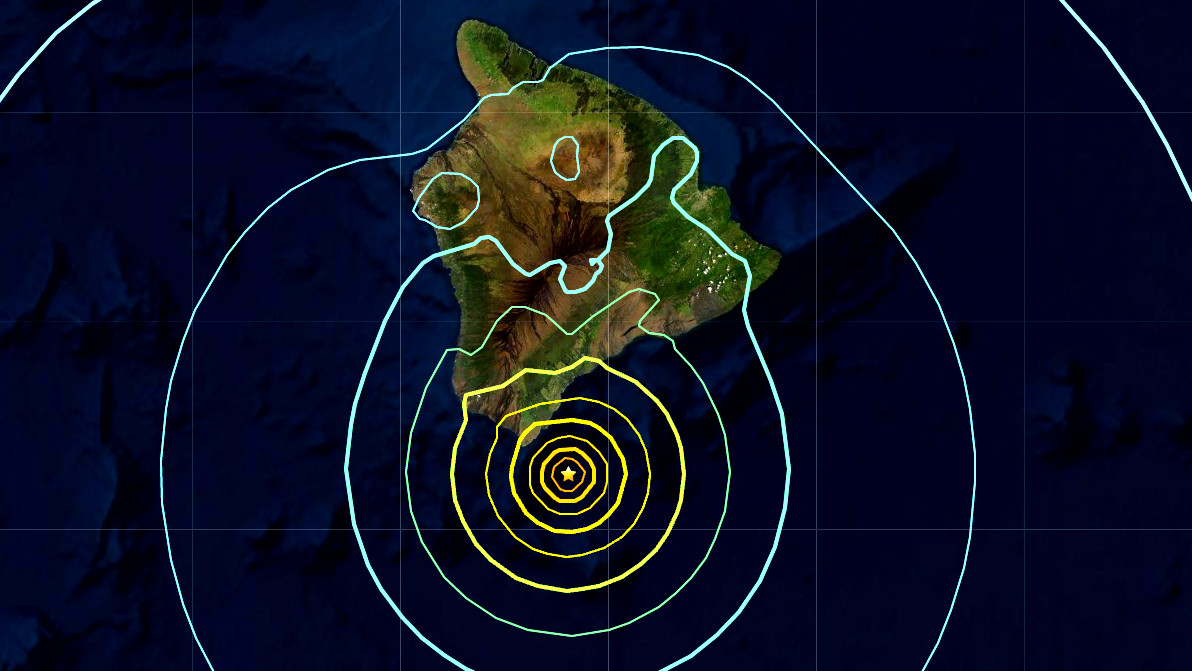 HAWAIʻI - The Pacific Tsunami Warning Center says a tsunami is NOT expected from the quake, but said many areas may have experienced strong shaking.

(BIVN) – A preliminary Magnitude 6.2 earthquake shook off the Kaʻū coast of Hawaiʻi island on Sunday just before noon, and was felt across the Big Island.

The Pacific Tsunami Warning Center says no tsunami is expected from the quake, but said many areas may have experienced strong shaking.

The earthquake was located in the water on the south side of Hawaiʻi island, about 18.7 miles south of the town of Naʻalehu. The event occurred at a depth of over 10 miles.

UPDATE – (12:12 p.m. HST) – “As in all earthquakes, be aware of the possibility of after-shocks,” the Hawaiʻi County Civil Defense stated in a radio message. “If the earthquake was strongly felt in your area, precautionary checks should be made for any damages; especially structural and to utility connections of Gas, Water, and Electricity.”

“The depth, location, and recorded seismic waves of the earthquake suggest a source due to bending of the oceanic plate from the weight of the Hawaiian island chain, a common source for earthquakes in this area,” the USGS says.

USGS HVO says a Magnitude 4.3 aftershock occurred at 11:53 a.m., about 5 km (3 miles) north of the main earthquake, at a depth of 36 km (22 miles). Two smaller aftershocks followed theses quakes and other aftershocks are possible and could be felt, the scientists say.

UPDATE – (1:10 p.m. HST) – The Hawaiʻi Department of Transportation issued a news release following the earthquake, and reported on the status of various transportation facilities and infrastructure:

All Hawaiʻi Island airports (KOA, MUE, UPP, and ITO) are open. Staff are conducting inspections of runways and taxiways per established procedures.

No damage to commercial harbors in Hilo and Kawaihae.

HDOT Highways will be inspecting Hakalau and Kolekole Bridges. No reported damage at this time.