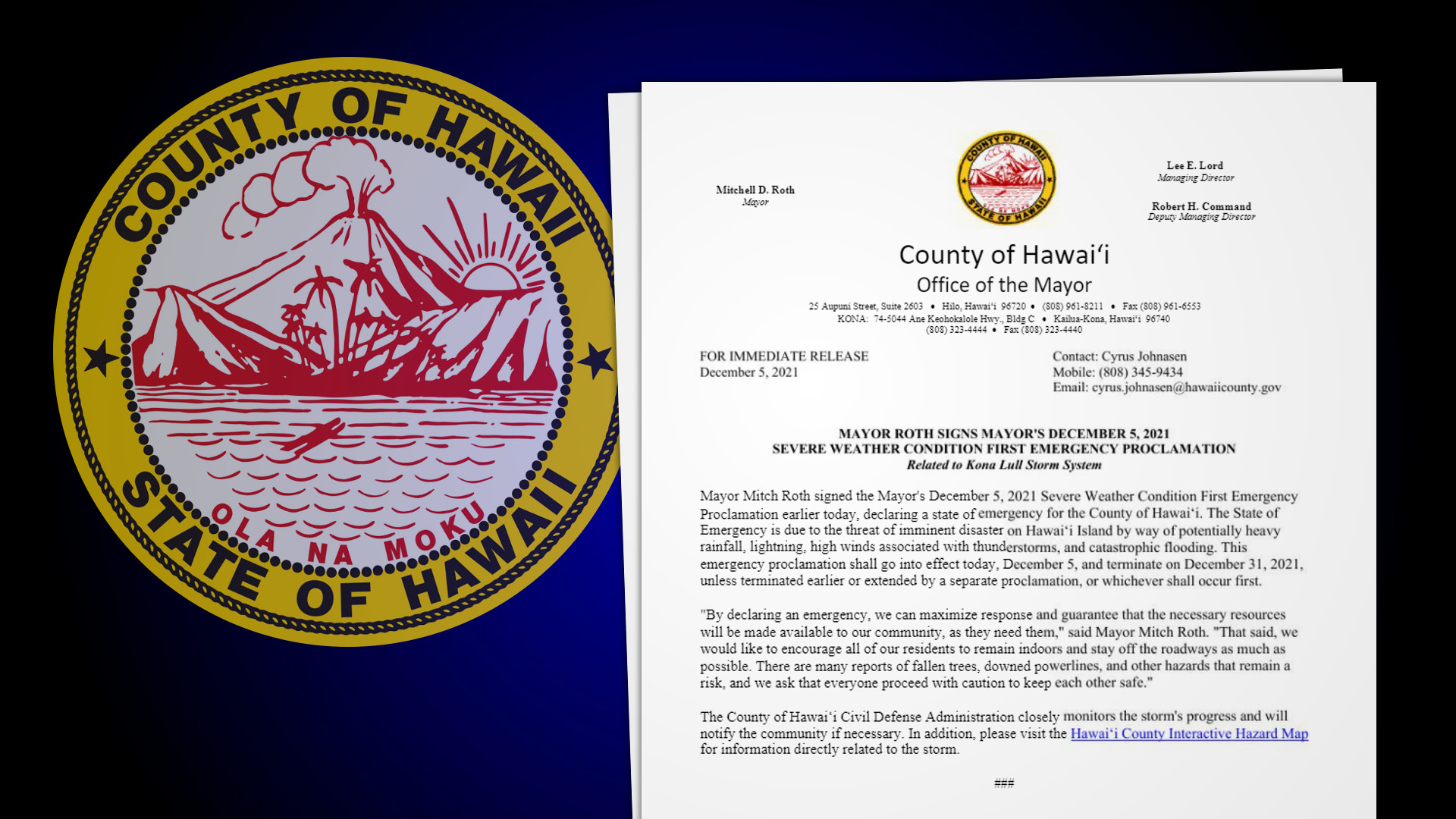 HAWAIʻI ISLAND - A Flash Flood Warning was in effect on Sunday night, as officials declared a state of emergency for the County of Hawaiʻi.

A view of the Hawaiʻi County Interactive Hazard Map as it appeared on Sunday evening, with various power outages and downed trees reported.

(BIVN) – Hawaiʻi island officials signed an emergency proclamation on Sunday, as the effects of a kona low spread across the State.

Mayor Mitch Roth signed the “Mayor’s December 5, 2021 Severe Weather Condition First Emergency Proclamation”, declaring a state of emergency for the County of Hawaiʻi. “The State of Emergency is due to the threat of imminent disaster on Hawaiʻi Island by way of potentially heavy rainfall, lightning, high winds associated with thunderstorms, and catastrophic flooding,” a County news release stated.

As of Sunday evening, a number of weather alerts were posted for the Big Island.

“An unusually strong kona low will bring numerous impacts across the state of Hawaii through at least Tuesday,” the National Weather Service wrote in a 4 p.m. discussion. “The biggest threat will be the rainfall and we will see a prolonged period of heavy rain across many areas. Widespread 10 to 15 inches of rain is expected with isolated areas of 20 to 25 inches. Rain events of this size can cause catastrophic flooding and affect areas that do not usually flood (such as leeward areas).”

A Flash Flood Warning was in effect for much of the day, as heavy rainfall soaked the slopes of the Kaʻū and Puna districts. The National Weather Service reported peak radar rainfall estimates of 2 to 3 inches per hour were occurring near Wood Valley. The rainfall was expected to continue well into the nighttime hours.

A Blizzard Warning remains in place for the summits of Maunakea and Mauna Loa. Additional snow accumulations of 4 to 6 inches, with winds gusting as high as 80 mph, were forecast. Summit roads were closed.

Hawaiʻi Volcanoes National Park reported Chain of Craters Road, Mauna Loa Road, and Kīpukapuaulu were closed “due to down trees, heavy rains, high winds, and dangerous road conditions. No public access is allowed at this time.”

A High Surf Warning was also in effect, with surf heights of 15 to 25 feet along the north facing shores of the Big Island expected. In a rare coastal flood statement, the National Weather Service said “the large swell combined with high astronomical tides may produce elevated runup along north facing shores in the predawn hours.”

The entire island of Hawaiʻi remains under a Flood Watch.

“By declaring an emergency, we can maximize response and guarantee that the necessary resources will be made available to our community, as they need them,” said Mayor Mitch Roth. “That said, we would like to encourage all of our residents to remain indoors and stay off the roadways as much as possible. There are many reports of fallen trees, downed powerlines, and other hazards that remain a risk, and we ask that everyone proceed with caution to keep each other safe.”

The County of Hawaiʻi Civil Defense administration says it will closely monitor the storm’s progress and will notify the community if necessary.