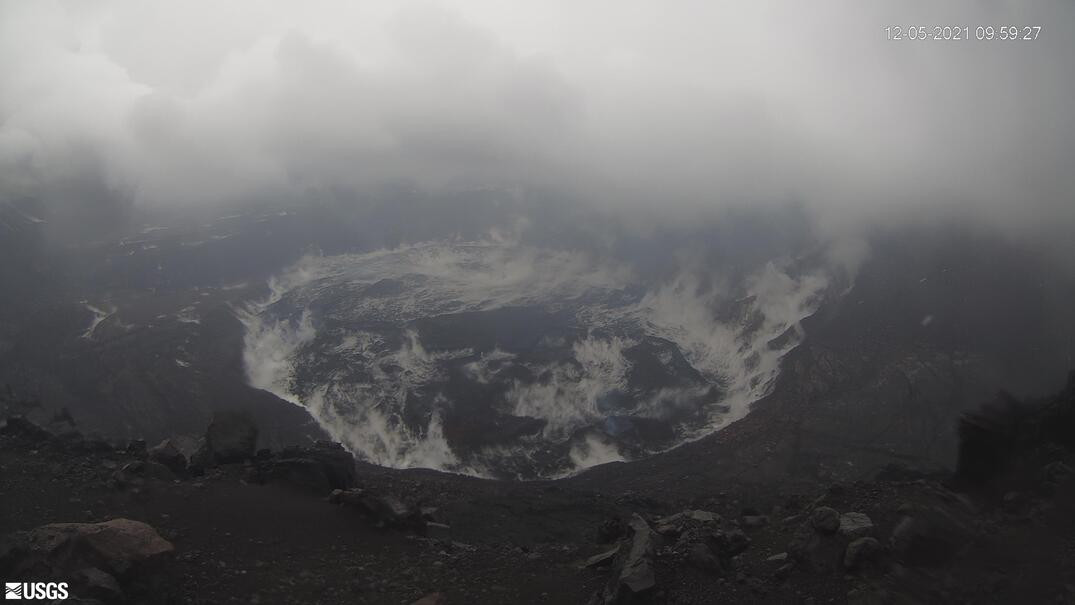 USGS webcam panorama of Halemaʻumaʻu and down-dropped caldera floor from the west rim of the new summit collapse features, taken on Sunday morning

HAWAIʻI VOLCANOES NATIONAL PARK - As of Sunday morning, the rate of eruption "continues to be very low and any activity is difficult to view given the current weather."

(BIVN) – The eruption of Kīlauea volcano appears to be on the verge of a pause, as the rate of lava effusion has slowed and has become difficult to observe due to weather conditions.

“Lava effusion from the western vent decreased significantly Friday afternoon, accompanied by a decrease in volcanic tremor,” the USGS Hawaiian Volcano Observatory reported on Sunday morning. “Both remain low this morning. A minor deflationary tilt signal recorded on summit tiltmeters that began on Friday afternoon has stabilized and there was little change in tilt over the past 24 hours.”

“Today, poor viewing conditions make it difficult to confirm the level of activity, however there was no active lava visible at the surface when it was last clearly visible at 9 p.m. yesterday,” the USGS wrote. “The decrease in activity indicates an effective pause in the current eruption, however this is the fourth such pause since the eruption began on September 29 and a return to earlier rates of eruption is possible.”

The most recent sulfur dioxide (SO2) emission rate, measured on November 29, was approximately 1,200 tonnes per day. “However, continuous instrument measurements indicate that SO2 emission rates have decreased with the change in eruption rate,” scientists wrote. “Earthquake activity remains below background.”

No unusual activity has been noted in the Kīlauea East Rift Zone. All activity associated with the latest eruption at Kīlauea’s summit has been occurring within a closed area of Hawai’i Volcanoes National Park.