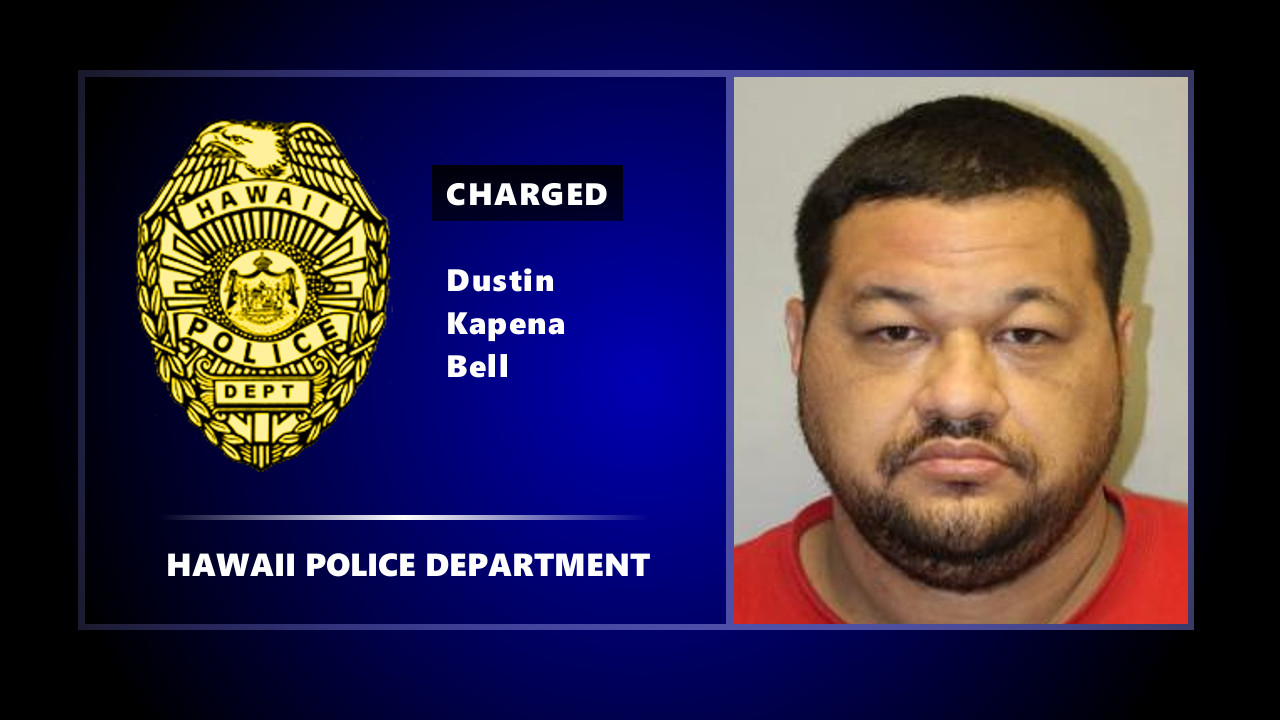 graphic by BIVN, photo of Bell provided by Hawaiʻi Police

PEPEʻEKEO, Hawaiʻi - Police officers responded to a report of a male who had been shot and was lying in the bushes on the side of Sugar Mill Road.

The charges stem from an incident that occurred early Saturday morning on Sugar Mill Road in Pepe‘ekeo. Shortly before 6:00 a.m., South Hilo Patrol officers responded to a report of a male who had been shot and was lying in the bushes on the side of the roadway.

Police located the victim who reported that he had been shot several hours earlier by the boyfriend of a female acquaintance. The 31-year-old victim was transported via ambulance to the Hilo Medical Center where he later underwent surgery and remains hospitalized in stable condition.

During the course of this investigation, detectives determined that a stolen vehicle case initiated earlier in the morning by Bell was related to the shooting incident. Bell reported that his vehicle was stolen from his residence in Hilo; however, it was later determined that that was false.

Bell’s girlfriend was found to be operating the vehicle, and later had parked at the bottom of Sugar Mill Road. Bell located the vehicle and shot the victim who was seated in the passenger seat. The female then drove away from the scene and was involved in a single-vehicle traffic casualty which rendered the vehicle inoperable. Fearing for his life, the male shooting victim exited the vehicle and fled the area into the bushes to hide from the suspect who was approaching the accident scene. Bell then picked up his girlfriend from the accident scene and left the area. Upon returning home from the incidents on Sugar Mill Road, Bell called police dispatch to report the vehicle as stolen.

Detectives from the Area I Criminal Investigation Section responded to the scene to continue the investigation. Search warrants were executed on Bell’s residence, as well as the truck he was operating and the vehicle his girlfriend was operating with the victim.

According to the Hawaiʻi County Prosecuting Attorney:

… Bell was charged with Attempted Murder in the Second Degree (engaged in conduct, which, under the circumstances as he believed them to be, constituted a substantial step in the course of conduct intended to culminate in his commission of the crime of Murder in the Second Degree, defined as intentionally or knowingly causing the death of another person), Assault in the First Degree (cause serious bodily injury to another person), and False Reporting to Law Enforcement Authorities (making a police report that is known to be false). If convicted as charged of Attempted Murder in the Second Degree, Bell is subject to a sentence of life imprisonment with the possibility of parole.

Officials say Bell will make his initial appearance on Monday in Hilo District Court. He remains in custody in lieu of $276,000 bail.