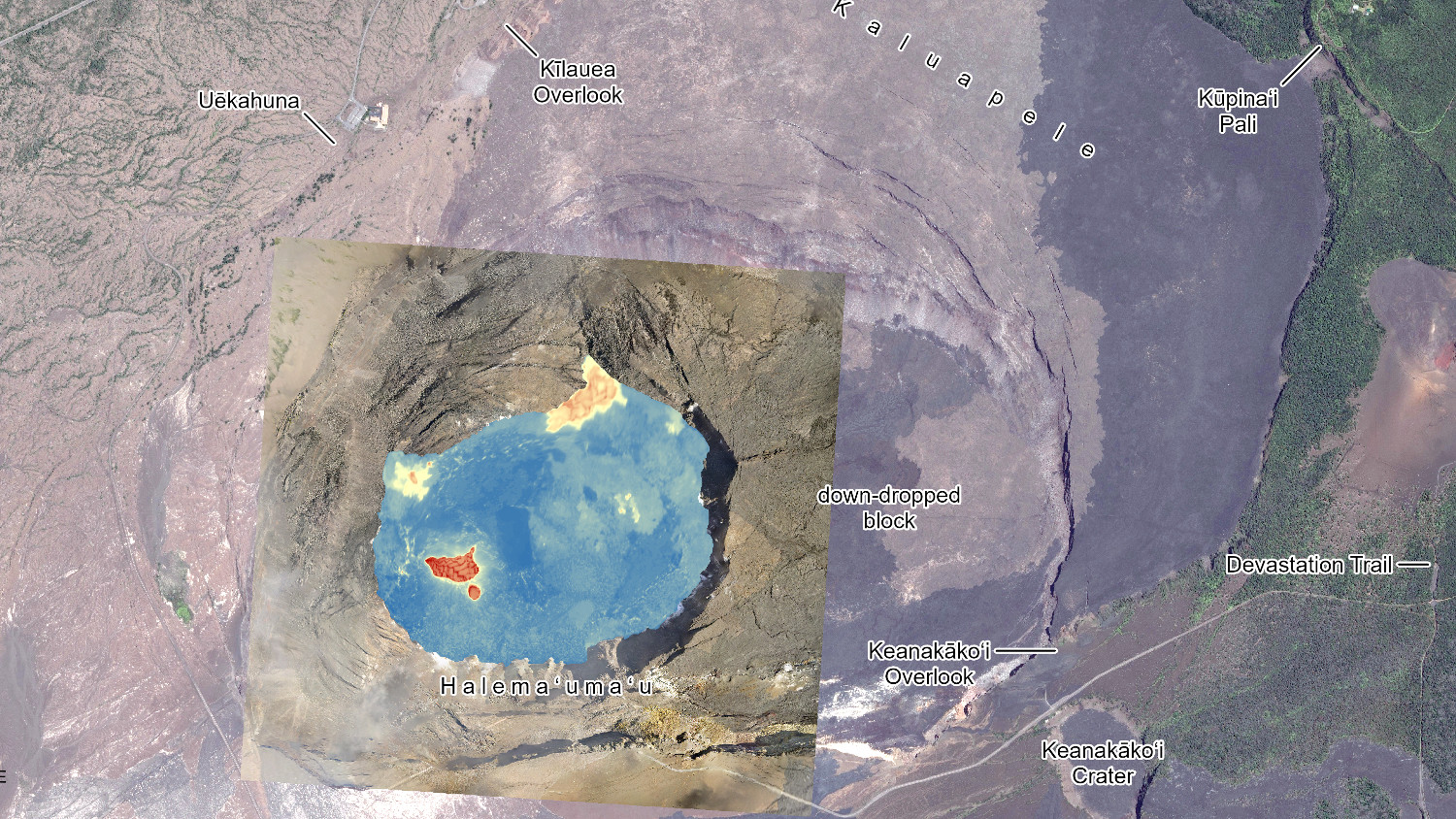 HAWAIʻI VOLCANOES NATIONAL PARK - The summit eruption continues, with all recent activity confined to Halemaʻumaʻu crater and no indications of activity migrating elsewhere on Kīlauea. 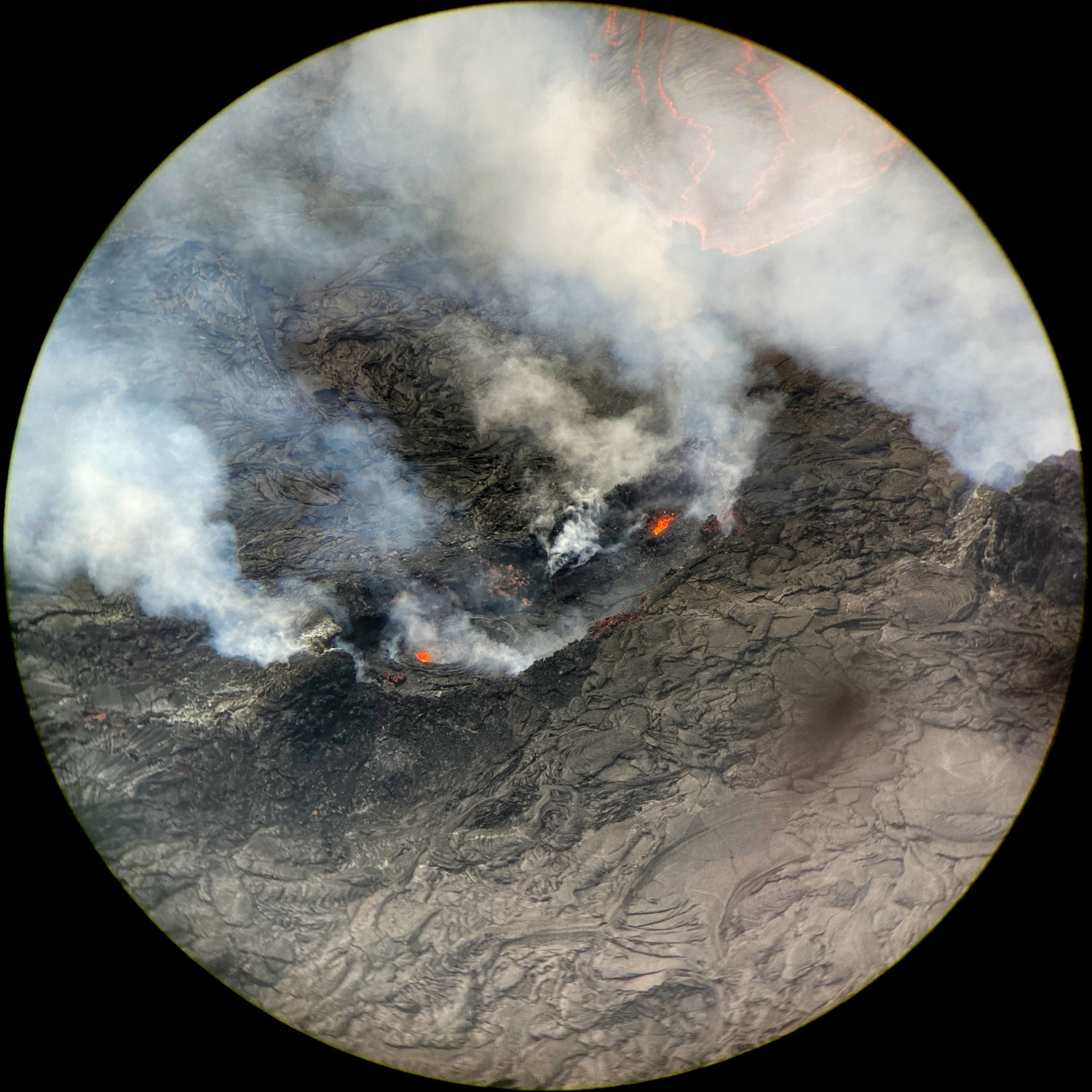 USGS: “Recent changes in the Kīlauea summit eruption have seen the crusting-over of the lava pond near the western end of the Halema‘uma‘u crater floor. This view of the lava pond vicinity was captured through the lens of a laser rangefinder on April 6, 2022, from the western rim of the crater. Although the pond is crusted over, the continued presence of molten lava beneath the surface is evidenced by two glowing openings at either end of the pond, which scientists observed to be ejecting low-level spatter every few seconds. The pond measures approximately 25 meters (82 feet) from its northern (lower-left) to southern (upper-right) end.” (USGS image by M. Zoeller)

(BIVN) – The USGS Volcano Alert Level for Kīlauea remains at WATCH, as the summit eruption within Halemaʻumaʻu crater continued over the past 24 hours. All recent activity has been confined to the crater, scientists say, and there are no indications of activity migrating elsewhere on Kīlauea.

Halemaʻumaʻu Lava Lake Observations: Eruption of lava from the western vent into the active lava lake (approximately 2.3% of the crater floor surface) and onto the crater floor continued over the past 24 hours. The active part of the lava lake showed continuous surface activity and the lake level continued to rise slightly. Shortly after 11 pm a surface flow emerged from the south side of the western vent. The flow travelled south on the crater floor and covered the southwestern lake margin with lava. The surface flow continues at this time. Since the beginning of this eruption on September 29, 2021, the crater floor has seen a total rise of about 99 meters (325 feet). The volume of lava effused since the beginning of this eruption was approximately 66 million cubic meters (18 billion gallons) as measured on April 6, 2022. 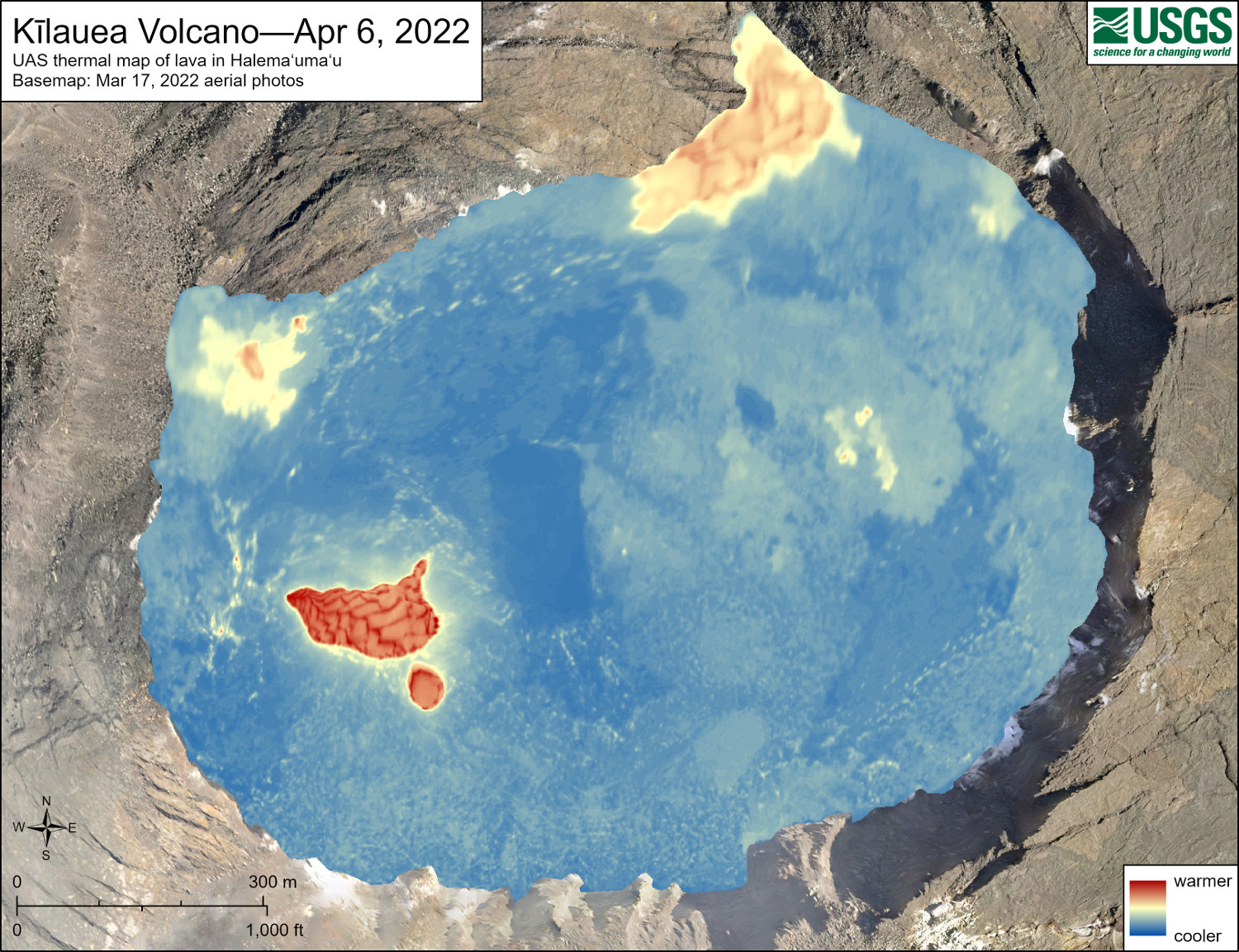 USGS: “Unoccupied aircraft systems (UAS) flights on April 6, 2022, allowed for aerial visual and thermal imagery to be collected of Halema‘uma‘u crater at the summit of Kīlauea. The active lake surface is limited to the western portion of the crater. The scale of the thermal map ranges from blue to red, with blue colors indicative of cooler temperatures and red colors indicative of warmer temperatures.”

Summit Observations: Summit tiltmeters continued the inflationary trend until around 3 pm and has remained flat since then. Volcanic tremor remains above background levels levels. A sulfur dioxide (SO2) emission rate of approximately 1,300 tonnes per day (t/d) was measured on April 8, 2022.

USGS Hawaiian Volcano Observatory says it has special use permits from the National Park Service to conduct the UAS missions as part of its “mission to monitor active volcanoes in Hawaii, assess their hazards, issue warnings, and advance scientific understanding to reduce impacts of volcanic eruptions.”