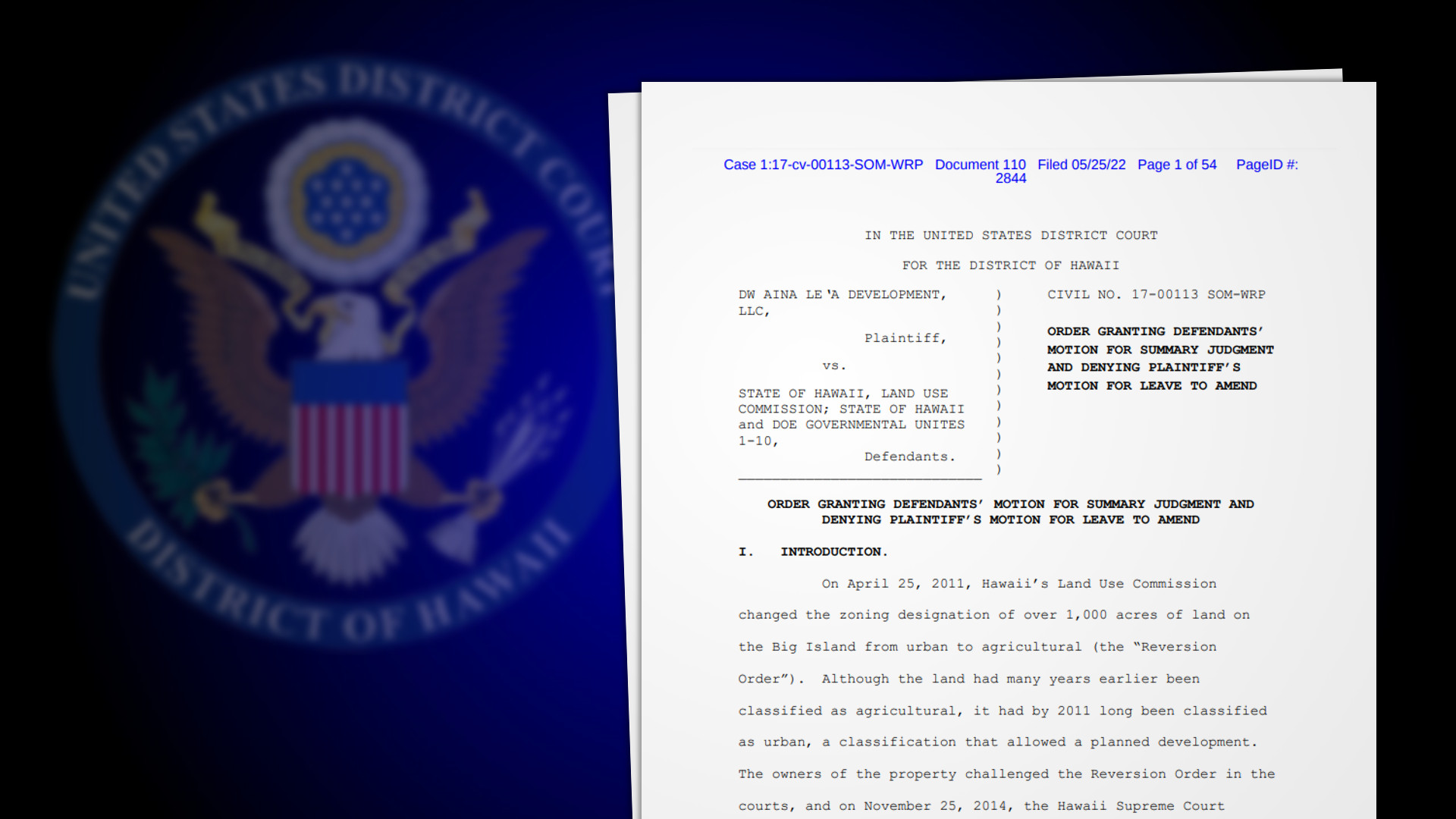 HONOLULU, Hawaiʻi - DW Aina Lea’s claim that its development rights had been taken by the LUC’s decision "failed as a matter of law".

(BIVN) – The United States District Court in the District of Hawai‘i has ruled in favor of the State of Hawaiʻi in a regulatory-taking lawsuit concerning the Villages at Aina Leʻa project in Waikōloa.

In a news release issued by the Hawaiʻi Department of the Attorney General, the state explained that Nevada-based DW Aina Leʻa Development, LLC, “sought $360 million for damages to its ‘development rights’ and lost profits stemming from an April 25, 2011 decision of the (Hawaiʻi State Land Use Commission) to revert the project land from the urban district to the agricultural district.”

Background on the lawsuit can be found in the introduction portion of the court decision:

On April 25, 2011, Hawaii’s Land Use Commission changed the zoning designation of over 1,000 acres of land on the Big Island from urban to agricultural (the “Reversion Order”). Although the land had many years earlier been classified as agricultural, it had by 2011 long been classified as urban, a classification that allowed a planned development. The owners of the property challenged the Reversion Order in the courts, and on November 25, 2014, the Hawaii Supreme Court affirmed a lower court decision vacating the Reversion Order. DW Aina Lea Dev., LLC v. Bridge Aina Lea, LLC., 134 Haw. 187, 339 P.3d 685 (2014). In the present action, Plaintiff DW Aina Le‘a Development claims that, until vacated, the Reversion Order was a “regulatory taking” and that DW is entitled to just compensation under the Fifth Amendment as a result of that alleged taking.

“In its order granting the State summary judgment on all claims,” the State explained, “the U.S. District Court ruled that DW Aina Lea’s claim that its development rights had been taken by the LUC’s decision failed as a matter of law. Additionally, the U.S. District Court held that DW Aina Leʻa lacked legal standing to pursue the lawsuit because it had assigned its legal claim to a separate company, Aina Leʻa, Inc., which subsequently filed for bankruptcy in 2017.”

“The Attorney General will vigorously defend all lawsuits that seek to extract money from State coffers based upon unsupported legal and factual theories,” Attorney General Holly Shikada said in a written statement. “The District Court’s ruling correctly establishes that the State is not liable to the plaintiff for damages.”