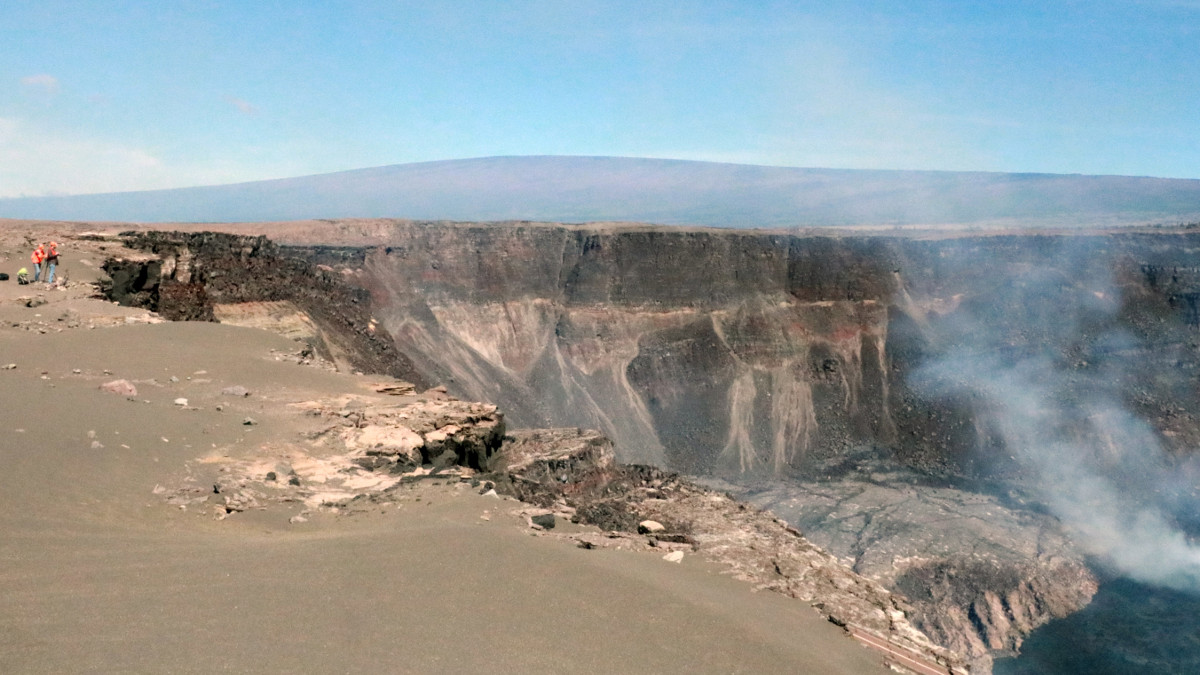 USGS: "From the south rim of Halema‘uma‘u crater, USGS scientists make observations of the eruption at Kīlauea summit. The western edge of Halema‘uma‘u crater floor is visible in the lower right part of the image, as is a section of Crater Rim Drive that collapsed in 2018. Mauna Loa is prominent in the background of the photo." (USGS photo by K. Mulliken)

VOLCANO WATCH: What Is A Volcano?

HAWAIʻI ISLAND - The USGS Hawaiian Volcano Observatory looks back on a topic that was discussed in an article two decades ago. 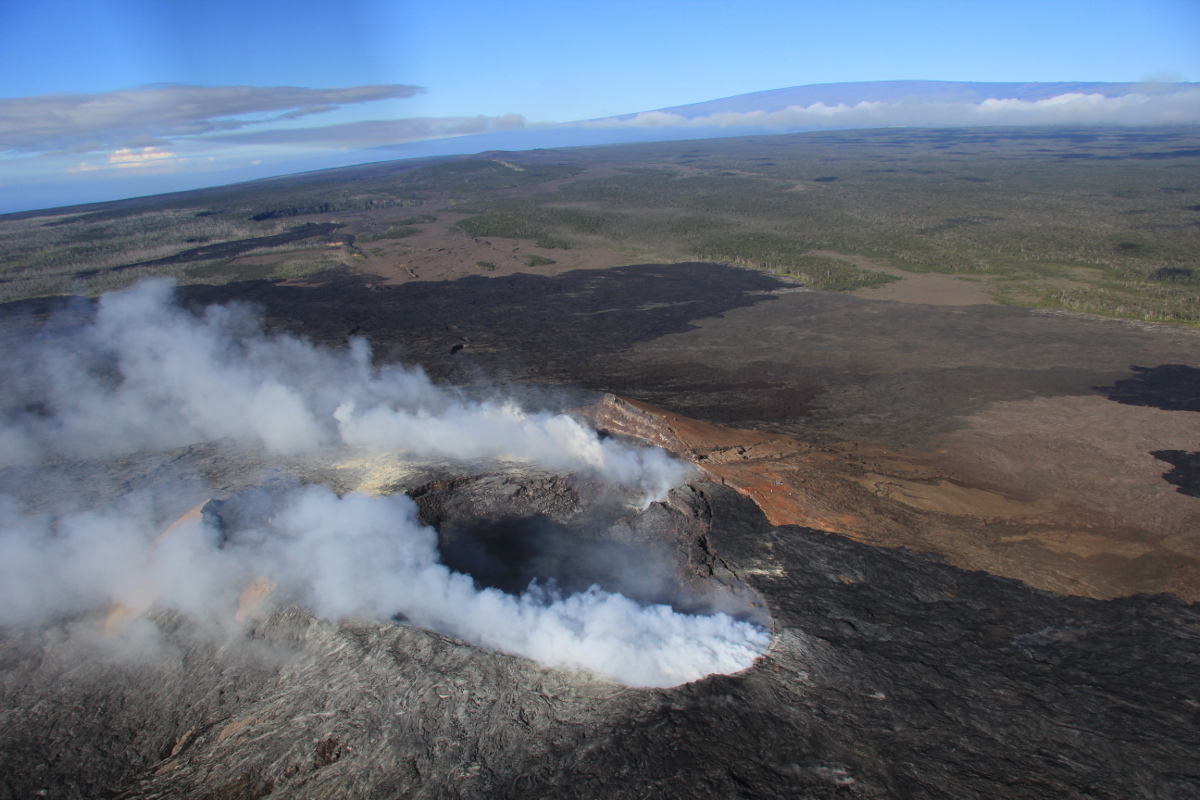 Photo from October 22, 2015 looks west towards the upper East Rift Zone of Kīlauea. “The fume-filled crater at Pu‘u ‘Ō‘ō is in the foreground, and the vent for the June 27th lava flow is just out of view of the lower right corner of the photo,” the USGS says. “Mauna Loa is visible in the upper right.”

(BIVN) – This week’s Volcano Watch article, written by U.S. Geological Survey Hawaiian Volcano Observatory scientists and affiliates, goes back to basics: What is a volcano? From the USGS:

What makes a volcano a volcano? This was the topic of a “Volcano Watch” article about 20 years ago. Recent questions from visitors suggest this remains a topic of great interest and deserves revisiting.

Many readers know that the Island of Hawaiʻi is made of five volcanoes that rise above sea level – Kīlauea, Mauna Loa, Hualālai, Mauna Kea, and Kohala. Those same readers know that a variety of smaller cones dotting the five major volcanoes are places where eruptions took place in the past. But if that’s the case, then why aren’t they also called volcanoes? Isn’t a volcano a place where lava reaches the surface of the earth? Why doesn’t the island have hundreds of volcanoes instead of only five?

To a volcanologist, a volcano is a structure containing a vent or cluster of vents fed by magma rising directly from great depth within the earth, generally more than 30 km (18 miles). Each of the five volcanoes on the Island of Hawaiʻi has such a deeply rooted feeder conduit that extends at least 100 km (60 miles) beneath the island. In contrast, the smaller cones formed around vents that were supplied by magma that branched off the main conduit at a shallow depth, probably less than 10 km (6 miles) deep and more likely about half that.

These smaller cones are analogous to limbs on a tree, and the deeply rooted volcano is equivalent to the trunk of the tree. Kīlauea, for example, will remain an active volcano long after any single cone stops erupting, because the main feeder conduit will still be intact. Therefore, volcanoes become larger than their parasitic cones, which contribute to their growth. 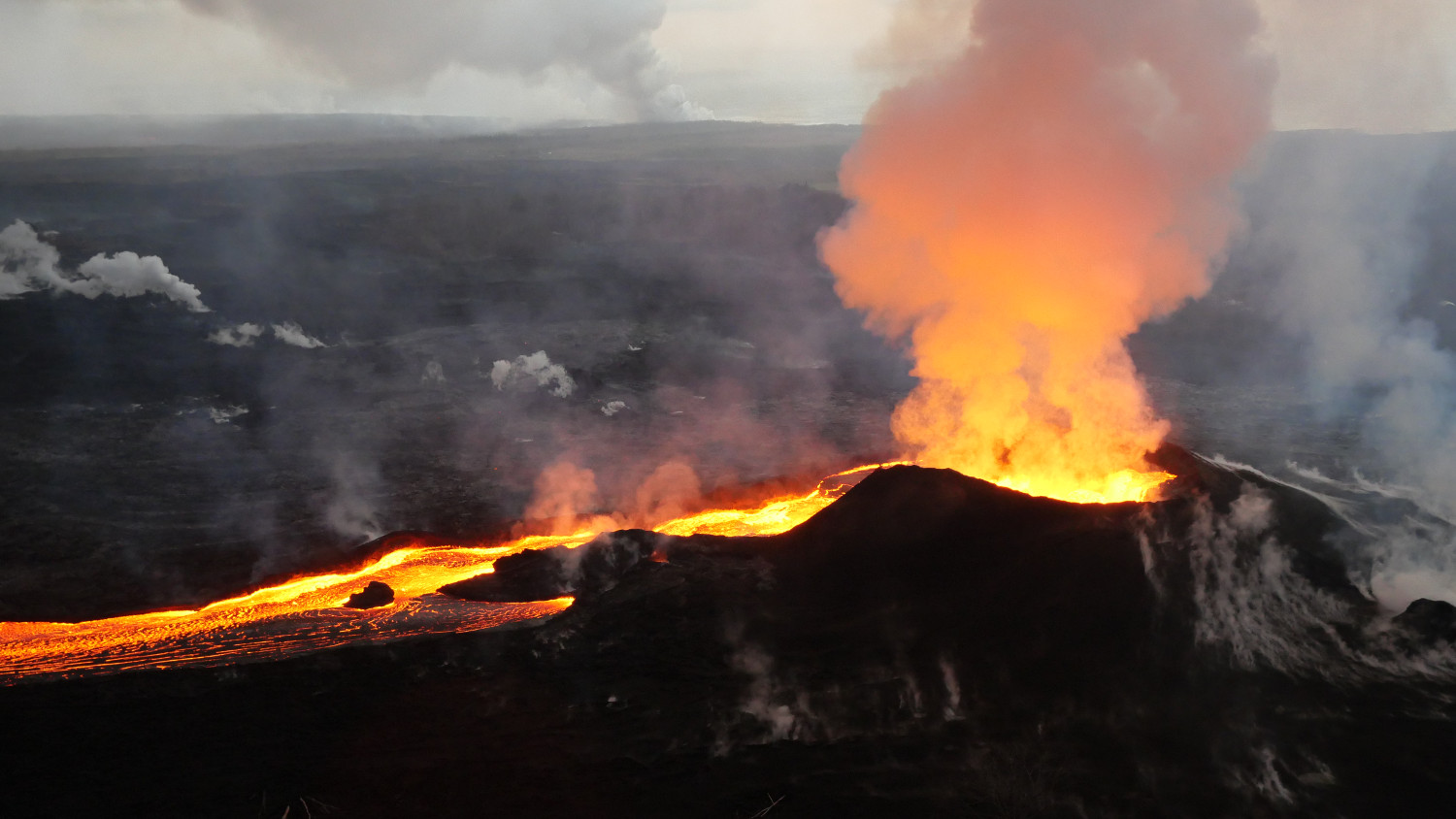 JULY 14, 2018: Early morning view of fissure 8 (now Ahuʻailāʻau) and lava channel looking toward the east. Laze plume from the ocean entry is visible in distance (left of the fissure 8 plume). USGS Photo.

Several terms are used to describe the vents that lack deep roots and get their magma from the main feeder conduit—flank vents, parasitic vents, rift vents. Sometimes “cone” is substituted for “vent.” So, for example, Ahuʻailāʻau cone that formed in Leilani Estates during the 2018 eruption could be termed a flank vent on Kīlauea. Puʻuʻōʻō was an active flank or rift vent on Kīlauea for about 35 years before stopping in 2018.

Physical appearance alone cannot always be used to make the distinction between a volcano and a subsidiary vent on that volcano. The composition of the lavas are used, often like a genetic tracer, to determine if the magma originated from the same source or not.

The second dictionary definition of “volcano”—that of a cone-shaped hill or mountain built around a vent, certainly doesn’t apply to volcanoes such as Kīlauea, whose shape is far from that of a cone. Another type of volcano lacking a cone shape are large calderas, such as Long Valley in eastern California or Yellowstone in Wyoming. No one would guess, without doing some geologic sleuthing, that these wide depressions are some of the largest volcanoes found on our planet. And then there are flood basalt flows, great outpourings of lava from extensive fissures that form nearly flat plateaus, with nary a mountain or even hill in sight.

A recent visitor to the Hawaiian Volcano Observatory quipped that Kaluapele (Kīlauea caldera) “sure doesn’t look like a volcano.” This visitor is a geologist and should have known better, but the image of Fuji, Mayon, and pre-1980 Mount St. Helens is strongly entrenched as the classic stereotype of a “real” volcano. Had that visitor come to Kīlauea in the year 1400, however, he would have seen a lava shield occupying the summit of Kīlauea, rather than a caldera. The caldera formed by collapse of the shield some 100 years later.

This illustrates another point about volcanoes—the shape can change drastically and quickly, and one year’s cone or shield can be next year’s caldera. Over the longer-term, Hawaiian volcanoes continue to grow and change shape. Witnessing the birth and growth of the several of these smaller cones during our lifetime leaves one to ponder just how many of these eruptions and how much time it takes to build a Hawaiian volcano.