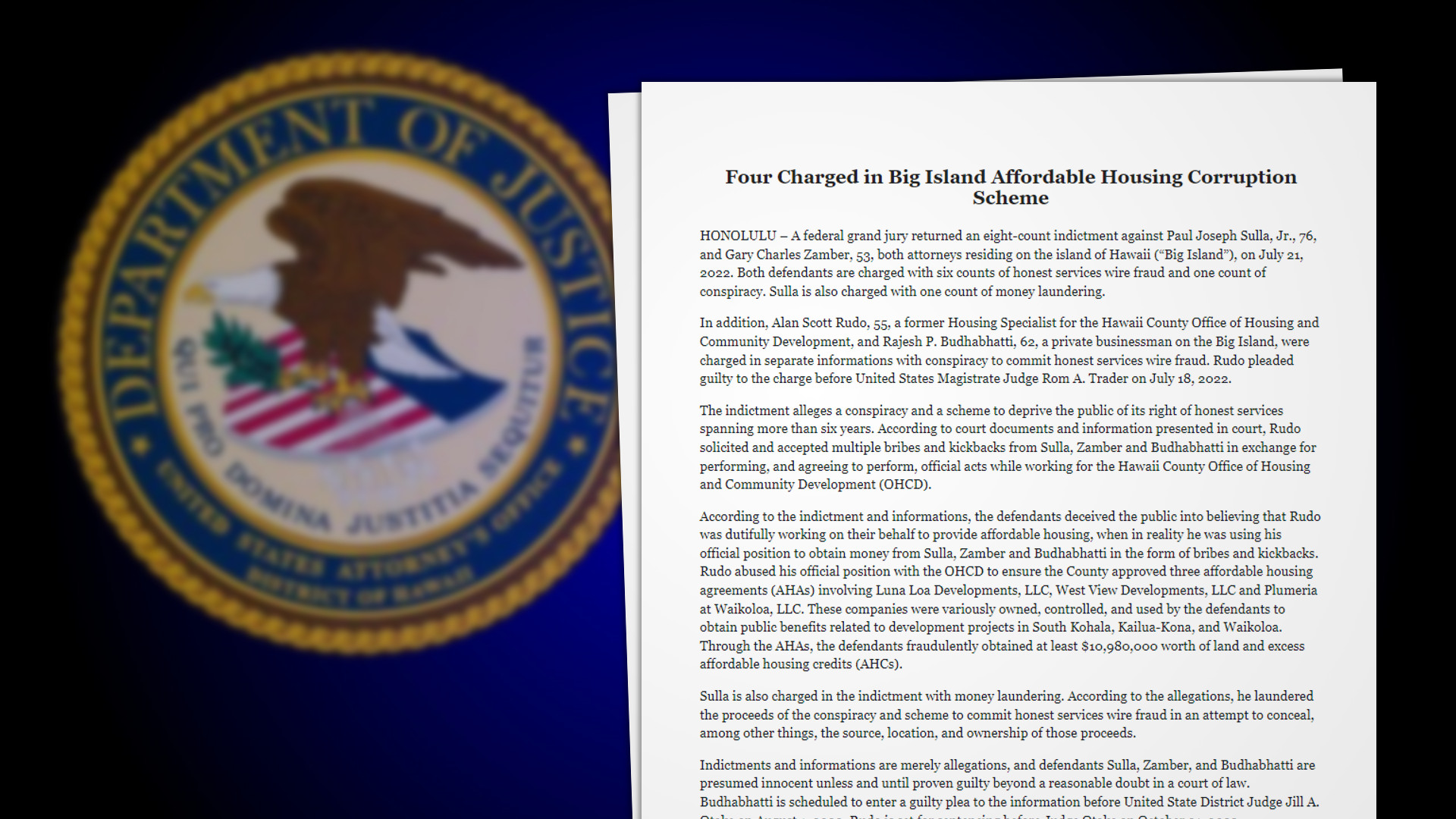 (BIVN) – Four individuals – one Hawaiʻi County official, a private businessman, and two attorneys on the Big Island – have been charged in an alleged affordable housing corruption scheme that was detailed in a U.S. Department of Justice news release and press conference on Monday.

Alan Scott Rudo, a former Housing Specialist for the Hawaii County Office of Housing and Community Development, has already pleaded guilty to a charge of conspiracy to commit honest services wire fraud in federal court on July 18, the department reports.

From the U.S. Attorney’s Office for the District of Hawaiʻi:

A federal grand jury returned an eight-count indictment against Paul Joseph Sulla, Jr., 76, and Gary Charles Zamber, 53, both attorneys residing on the island of Hawaii (“Big Island”), on July 21, 2022. Both defendants are charged with six counts of honest services wire fraud and one count of conspiracy. Sulla is also charged with one count of money laundering.

In addition, Alan Scott Rudo, 55, a former Housing Specialist for the Hawaii County Office of Housing and Community Development, and Rajesh P. Budhabhatti, 62, a private businessman on the Big Island, were charged in separate informations with conspiracy to commit honest services wire fraud. Rudo pleaded guilty to the charge before United States Magistrate Judge Rom A. Trader on July 18, 2022.

The indictment alleges a conspiracy and a scheme to deprive the public of its right of honest services spanning more than six years. According to court documents and information presented in court, Rudo solicited and accepted multiple bribes and kickbacks from Sulla, Zamber and Budhabhatti in exchange for performing, and agreeing to perform, official acts while working for the Hawaii County Office of Housing and Community Development (OHCD).

According to the indictment and informations, the defendants deceived the public into believing that Rudo was dutifully working on their behalf to provide affordable housing, when in reality he was using his official position to obtain money from Sulla, Zamber and Budhabhatti in the form of bribes and kickbacks. Rudo abused his official position with the OHCD to ensure the County approved three affordable housing agreements (AHAs) involving Luna Loa Developments, LLC, West View Developments, LLC and Plumeria at Waikoloa, LLC. These companies were variously owned, controlled, and used by the defendants to obtain public benefits related to development projects in South Kohala, Kailua-Kona, and Waikoloa. Through the AHAs, the defendants fraudulently obtained at least $10,980,000 worth of land and excess affordable housing credits (AHCs).

Sulla is also charged in the indictment with money laundering. According to the allegations, he laundered the proceeds of the conspiracy and scheme to commit honest services wire fraud in an attempt to conceal, among other things, the source, location, and ownership of those proceeds.

Indictments and informations are merely allegations, and defendants Sulla, Zamber, and Budhabhatti are presumed innocent unless and until proven guilty beyond a reasonable doubt in a court of law. Budhabhatti is scheduled to enter a guilty plea to the information before United State District Judge Jill A. Otake on August 1, 2022. Rudo is set for sentencing before Judge Otake on October 31, 2022.

As part of the investigation, the United States has recovered over $2.3 million in criminal proceeds and 45 affordable housing credits connected to the charges. As part of his guilty plea, Rudo agreed to forfeit his interest in those funds and the 45 affordable housing credits, as well as other real estate connected to the charges. Rudo has also agreed to a money judgment against him in the amount of $2,114,170.

This case is the result of an on-going investigation conducted by the Federal Bureau of Investigation. Assistant U.S. Attorneys Mohammad Khatib and Sydney Spector are prosecuting the case.