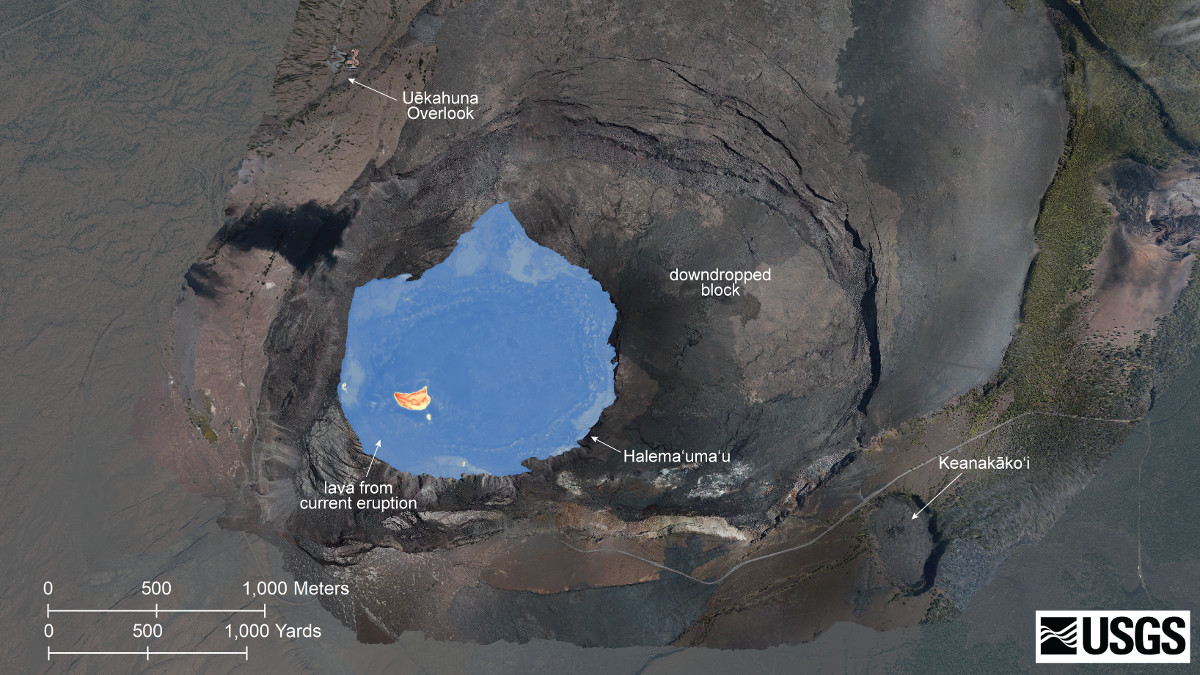 Inset of a Kīlauea summit thermal map produced by the USGS HVO on August 16, 2022

HAWAIʻI VOLCANOES NATIONAL PARK - A recent helicopter overflight on August 16 allowed for aerial visual and thermal imagery of Halema‘uma‘u crater to be collected. 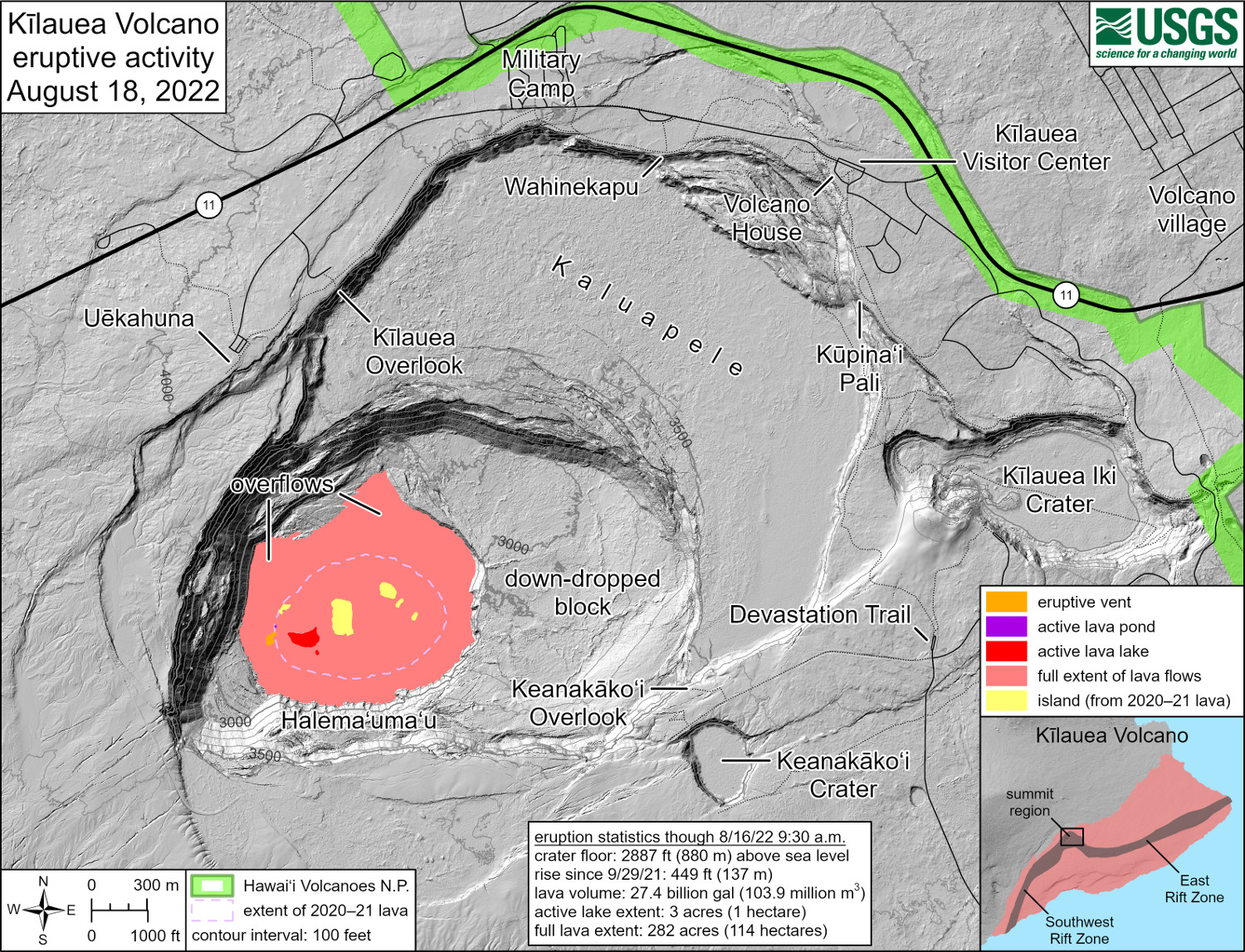 USGS: “This reference map depicts the ongoing Kīlauea summit eruption on August 18, 2022. One eruptive vent (orange) is active within Halema‘uma‘u, on the western side of the crater floor. An adjacent pond (purple) is feeding lava to a larger lake (red) via a crusted-over tube. The eruption statistics provided here are current as of the last HVO overflight on August 16, 2022. This map provides a volume-averaged elevation for the crater floor—2,887 feet (880 meters) above sea level—and its rise since September 29, 2021—449 feet (137 meters).”

The USGS Hawaiian Volcano Observatory says a helicopter overflight on August 16 allowed for aerial visual and thermal imagery to be collected of Halema‘uma‘u crater, where lava continues to erupt. 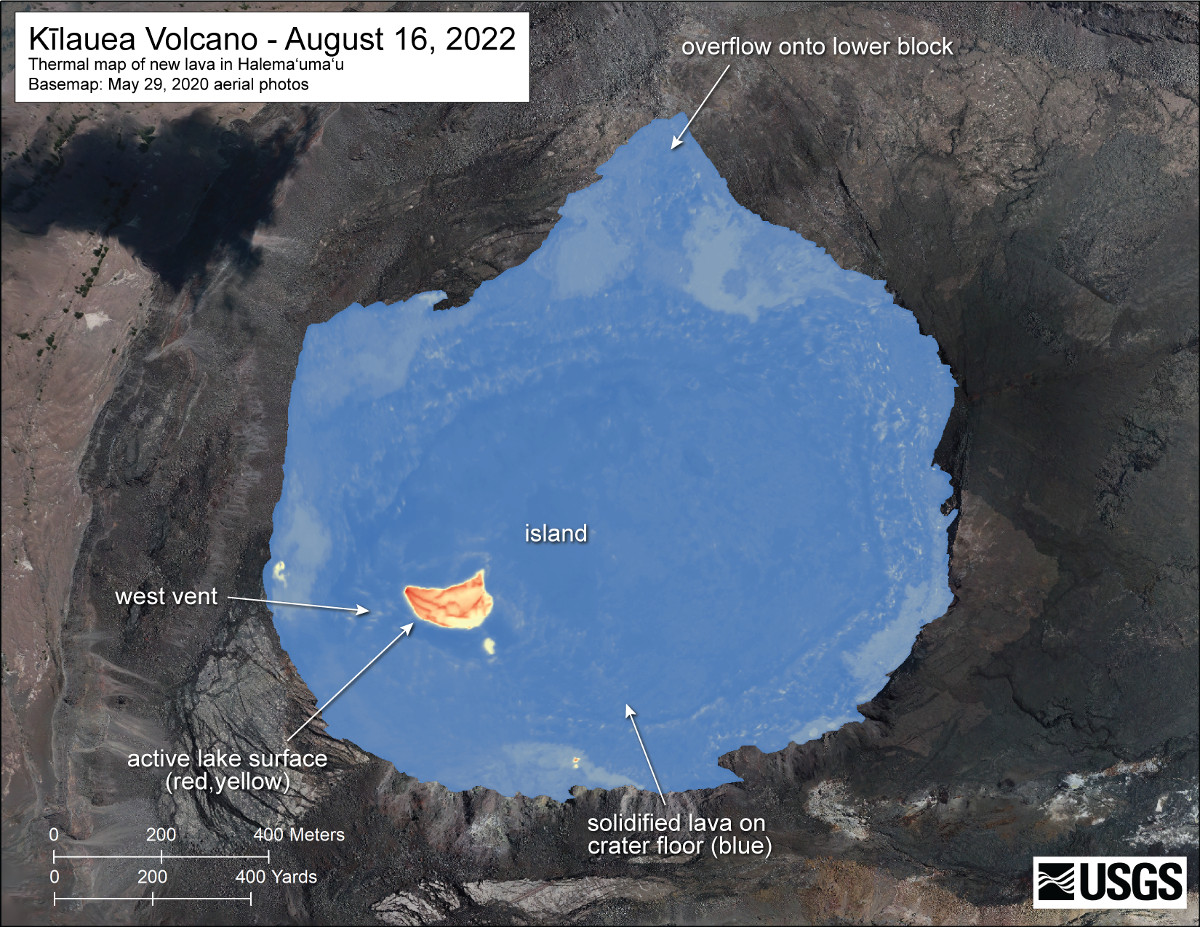 USGS: “A helicopter overflight on August 16, 2022, allowed for aerial visual and thermal imagery to be collected of Halema‘uma‘u crater at the summit of Kīlauea. The active lake surface is limited to the western portion of the crater. The scale of the thermal map ranges from blue to red, with blue colors indicative of cooler temperatures and red colors indicative of warmer temperatures.”

No significant changes have been observed at the summit or in either rift zone, scientists reported on Thursday. The lava has been confined to the summit crater since the beginning of this eruption on September 29, 2021.

From the Thursday HVO update:

Halemaʻumaʻu Lava Lake Observations: Eruption of lava from the western vent into the active lava lake and onto the crater floor continued over the past 24 hours. The active part of the lava lake showed continuous surface activity. Surface activity, outside the lava lake, occasionally occurs from breakouts along the margins of the crater. Since the beginning of this eruption on September 29, 2021, the crater floor has seen a total rise of about 136 meters (446 feet). The volume of lava effused since the beginning of this eruption was approximately 102 million cubic meters (27 billion gallons) as measured on August 4, 2022.