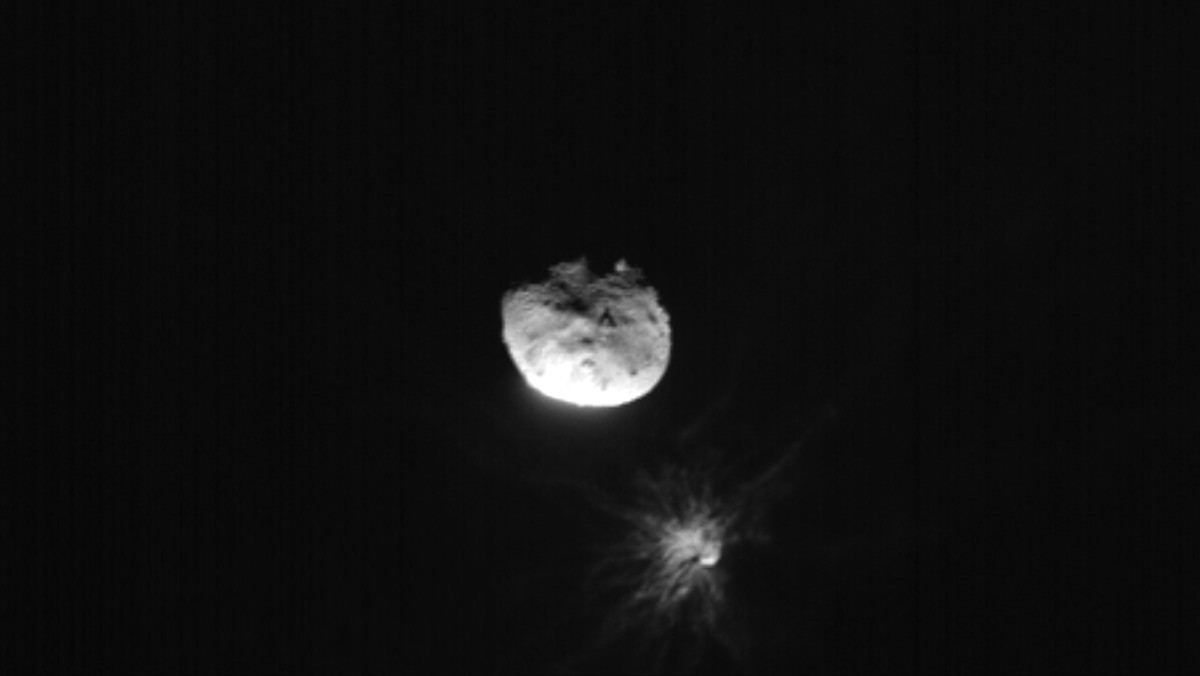 HAWAIʻI ISLAND - The University of Hawaiʻi says the DART mission "demonstrated the significant role Hawaiʻi astronomers and telescopes have in protecting Earth from a potential catastrophic asteroid impact." 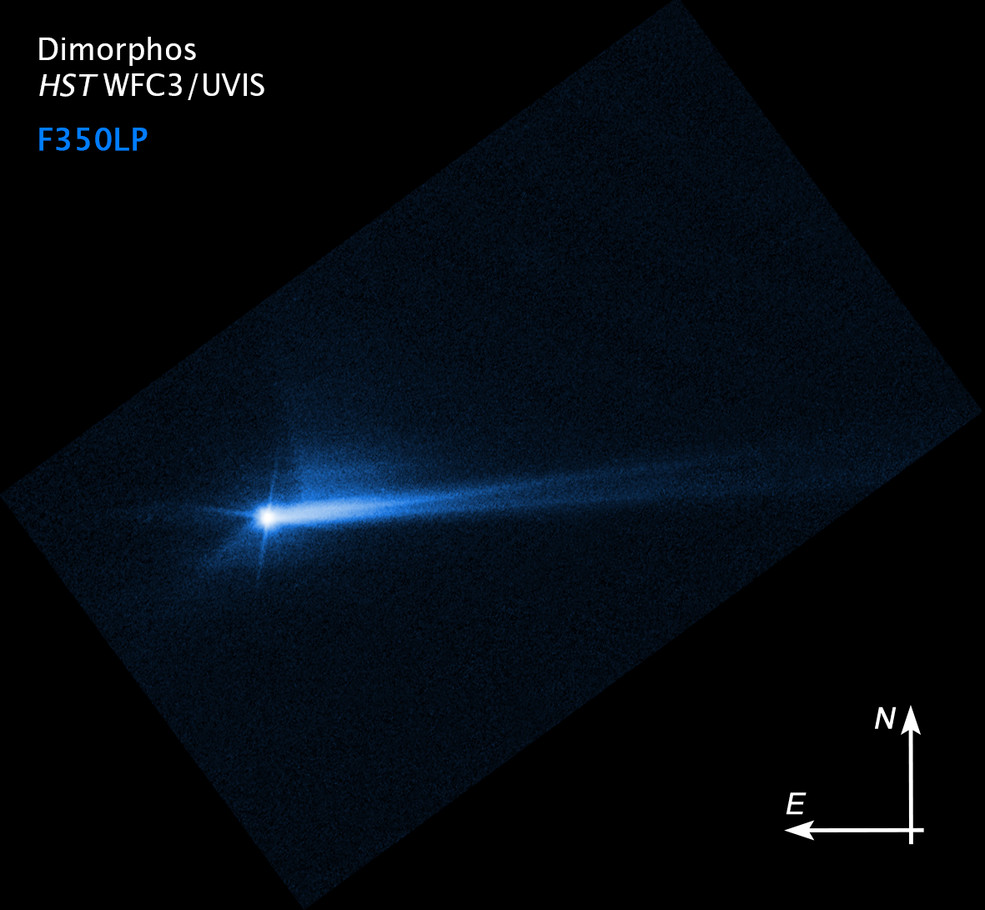 NASA: “This imagery from NASA’s Hubble Space Telescope from Oct. 8, 2022, shows the debris blasted from the surface of Dimorphos 285 hours after the asteroid was intentionally impacted by NASA’s DART spacecraft on Sept. 26. The shape of that tail has changed over time. Scientists are continuing to study this material and how it moves in space, in order to better understand the asteroid.” (Credits: NASA / ESA / STScI / Hubble)

(BIVN) – Officials have announced that the NASA DART mission, which crashed a spacecraft into a small asteroid in order to see if it could alter the asteroid’s path, was a success,

According to a NASA news release:

The results of test were confirmed by Hawai‘i telescopes, according to this news release from the University of Hawaiʻi:

NASA’s successful planetary defense test that sent the 1,260-pound DART spacecraft colliding into an asteroid on September 26 demonstrated the significant role Hawaiʻi astronomers and telescopes have in protecting Earth from a potential catastrophic asteroid impact.

The space agency’s historic mission centered on navigating a spacecraft into the small “moonlet” of asteroid Didymos, called Dimorphos, to alter the moonlet’s orbit around its parent asteroid—a strategy that could be used to change the path of a possibly much larger asteroid on a collision course with Earth in the future. According to NASA, the test was a success, shortening the moonlet’s 12-hour orbit around Didymos by about 32 minutes, a change much larger than scientists projected.

The same telescopes and astronomers that are part of the planetary defense system that detect Near-Earth Objects (NEOs) and Potentially Hazardous Asteroids (PHAs) were able to help confirm the success of the NASA test.

“Our programs to search the skies constantly for hazard asteroids left ATLAS well-positioned to monitor the DART impact from the ground as it happened. Our telescope that we just installed in South Africa performed flawlessly, and the visuals of the dust plume right after the impact were spectacular and beyond expectations,” said University of Hawai’i Astronomer Larry Denneau, a co-principal investigator at the UH-operated Asteroid Terrestrial-impact Last Alert System or ATLAS. 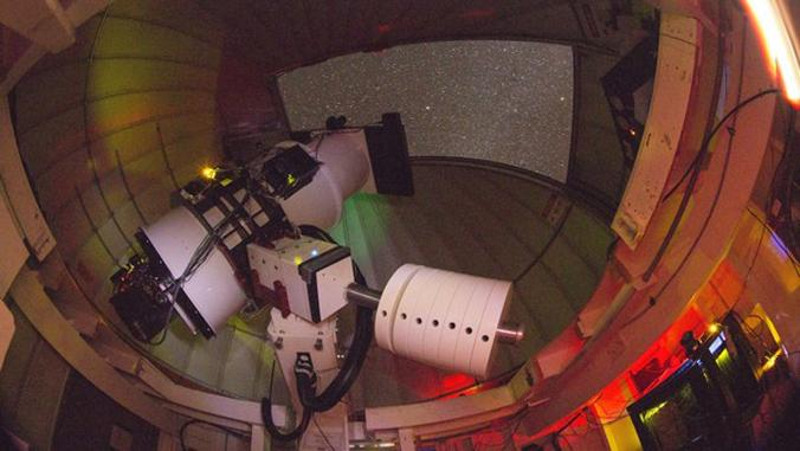 The UH Institute for Astronomy (IfA) operates the NASA-funded ATLAS, and Panoramic Survey Telescope and Rapid Response System (Pan-STARRS) which are at the forefront of the world’s efforts to discover NEOs and PHAs. IfA astronomers have been instrumental in tracking down the most dangerous NEOs, defined by NASA as those with diameters greater than 140 meters across (459 feet). While searching for these large, dangerous asteroids, IfA researchers are also working to locate asteroids smaller in size that could pose a major threat to Earth.

“Of the dangerous 140-meter asteroids, there are tens of thousands that we haven’t found yet. But we are monitoring the skies every night so that we can build up the catalog and keep track of them in the future,” said Denneau.

ATLAS’ state-of-the-art asteroid alert system is a four-telescope system located in the northern hemisphere atop Haleakalā and Maunaloa and in the southern hemisphere at Sutherland Observing Station in South Africa and El Sauce Observatory in Chile. Pan-STARRS atop Haleakalā currently finds nearly as many NEOs and PHAs as the rest of the world’s observatories combined. ATLAS and Pan-STARRS complement each other in capability—ATLAS specializes in finding asteroids on very close approaches to the Earth, while Pan-STARRS can find dangerous asteroids when they are farther away, possibly years before they approach the Earth.

Denneau added how the experiment further demonstrates how essential it is for astronomers to continue to track objects that can potentially threaten our planet. “The earlier you can know that an asteroid will collide with the Earth, the more options you have, and the less you have to deflect it.”

Throughout the next couple of months, IfA astronomers will work with students to study the moonlet Dimorphos’ orbit around Didymos using the UH88 telescope on Maunakea and Faulkes North telescope on Haleakalā, which is one of a number of observatories part of the Las Cumbres telescope network.