Hawaii County now has a greater understanding of how agriculture and eating habits on the Big Island relate to the quest for self-sufficiency.

HILO, Hawaii: Hawaii County now has a greater understanding of how agriculture and eating habits on the Big Island relate to the quest for self-sufficiency.

On Thursday, local media joined Mayor Billy Kenoi and other officials on the balcony of the mayor’s office in Hilo, where the Hawaii County Food Self-Sufficiency Baseline was released and explained.

The baseline study was prepared for the County Department of Research and Development by the University of Hawaii at Hilo Geography and Environmental Studies Department and Island Planning. The principal authors were Jeffrey Melrose and Dr. Donna Delparte.

The cornerstone graphic of the presentation and the study was the Food Self-Sufficiency Scorecard, which is further explained below in a county media release: 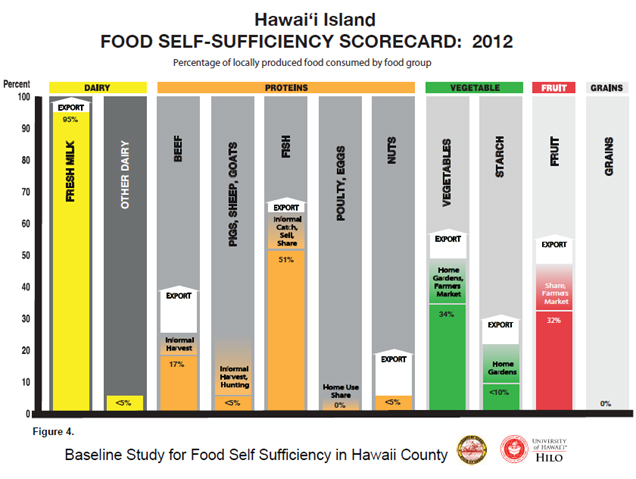 The above scorecard graphic summarizes the current state of local food production by major food groupings: 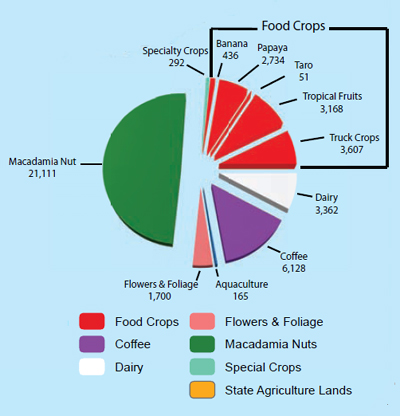 The press release also contained information on the island’s crop lands, and how they are used.

Crop Land Summary
The Baseline study provides detailed maps of the existing agricultural activity in each region on Hawaiʻi Island.

County Real Property Taxes
The report provides several maps and supporting data to summarize the state of current agriculture based on the real property tax records for Agricultural Use and Dedication Programs. These programs effect over 600,000 acres island-wide and result in $34 million dollars in tax saving to landowners. Real Property Tax benefits for agricultural use is the single largest tool the county has to encourage local food production and the current system could be more clearly focused to accomplish that goal.

Irrigation Systems
The current state of the five dedicated agricultural water systems on the island is summarized in the report along with a map of properties that draw agricultural water from the domestic system operated by the County Department of Water Supply. DWS is currently the largest daily provider of irrigation water islandwide serving a disperse group of farm activities. The largest single user of irrigation water on the island is the Natural Energy Laboratory at Keahole Point who provides fresh water to multiple aquacultural businesses.

Ocean Resources, Subsistence Hunting and Honey Bees
The report summarizes useful data related to ocean resource management and emphasizes the need for local actions to insure cooperative management for sustained use of the ocean commons that surround the island. It also summarizes available hunting data and tries to define the volume of meat taken from the forest and mauka lands to support the food needs of local families. The role of commercial honey bees is discussed and their importance in the food system is also discussed.

In this special video segment, we bring you the a portion of the presentation made at the press conference by Melrose.

After the presentation, Mayor Kenoi praised the work that went into the baseline study, and the valuable information that is now at the county’s disposal.