HONOLULU, Hawaii – State legislators have introduced a bill that – if passed – will overrule Hawaii County’s ban on new GMO crops. House Bill 2506 would amend Hawaii’s Right to Farm Act “to ensure that counties cannot enact laws, ordinances, or resolutions to limit the rights of farmers and ranchers to engage in modern […] 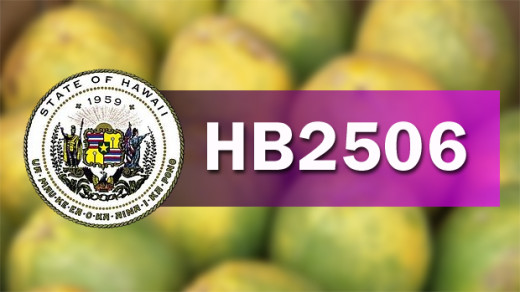 HONOLULU, Hawaii – State legislators have introduced a bill that – if passed – will overrule Hawaii County’s ban on new GMO crops.

House Bill 2506 would amend Hawaii’s Right to Farm Act “to ensure that counties cannot enact laws, ordinances, or resolutions to limit the rights of farmers and ranchers to engage in modern farming and ranching practices.”

The change to the Act reads:

The right of farmers and ranchers to engage in modern farming and ranching practices shall be forever guaranteed in this State. No law, ordinance, or resolution of any unit of local government shall be enacted that abridges the right of farmers and ranchers to employ agricultural technology, modern livestock production, and ranching practices not prohibited by federal or state law, rules, or regulations.HB2506, Jan. 23, 2014

Legislators apparently found the Act to be a good vehicle for over ruling the county’s GMO ban, since it already protects and preserves agricultural operations “by allowing farmers, who meet all legal requirements and use accepted farming management practices, protection from unreasonable controls on farming operations and from nuisance suits which might be brought against them.”

The bill gives an example:

In 2001, Hawaii joined the rest of the country by passing the Hawaii Right to Farm Act. As one judge remarked while dismissing a lawsuit against a pig farmer, “pork production generates odors which cannot be prevented, and so long as the human race consumes pork, someone must tolerate the smell.” Right to farm laws do not give farmers complete freedom to do as they please. Farmers must operate in a legal and reasonable manner to be eligible for the law’s protection and must follow best management practices.HB2506, Jan. 23, 2014

According to legislators, the Hawaii Right to Farm Act also “documents the importance of farming to the local community and State of Hawaii and puts non-farming rural residents on notice that generally accepted agricultural practices are reasonable activities to expect in farming areas.”

Rep. Onishi, who represents Hilo, Keaau, Kurtistown, and Volcano, called for stronger protections for Hawaii’s farmers and ranchers in a media release:

Like many other states, Hawaii has had to deal with encroaching urbanization and pressure it puts on our farms and agricultural lands. Unlike most states, Hawaii is an island with very limited space for agricultural endeavors. We’ve seen how hard it’s been to protect our ag lands and to keep them productive in the face of other pressing needs and priorities.

“But if we are interested in sustainability and moving Hawaii toward greater self-reliance, we will have to strike a better balance between our rural and urban needs. This measure is designed to do just that by protecting our local farmers and ranchers. They have a right to farm in the best way they see fit, as long as they follow legal and accepted agricultural practices, whether we’re talking about ranchers, poultry, hog, vegetable, flower and plant farmers.”Rep. Richard Onishi, Jan. 23, 2014

Supporters of Hawaii County’s GMO ban have been waiting for the state to try a preemption during the 2014 legislative session. Although the changes proposed in HB2506 do not mention anything about genetically modified organisms, it appears this would be the bill anti-GMO activists have been expecting.

The Hawaii County Council debated the GMO prohibition for months. Eventually, the local lawmakers settled on a law that would prevent all new genetically engineered crops from being grown on the island, yet would allow the already-established transgenic papaya, as well as GMO corn used on dairy farms, to continue to be grown. The mayor signed the bill into law in December.