PAHOA, Hawaii – Hawaii County Council candidate RJ Hampton berated primary election opponent Tiffany Edwards-Hunt during a candidate forum organized by the Puna Pono Alliance on Saturday night, before she herself stormed out of the event.

The outburst came during Hampton’s closing statement. Hampton is one of seven candidates running for Puna’s district 5 seat currently held by Zendo Kern, who is not seeking re-election. 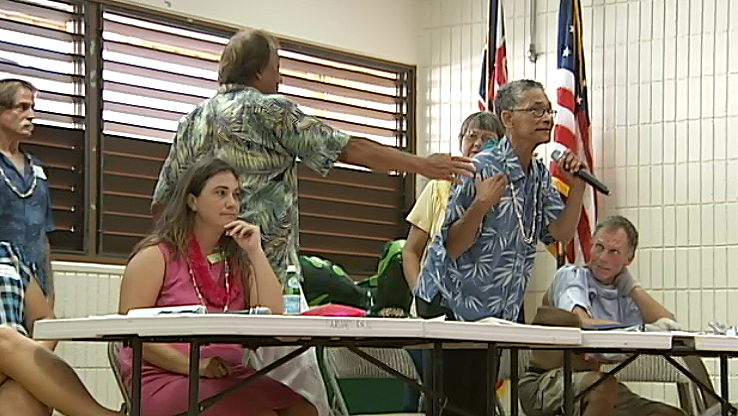 “I am committed to pono,” started Hampton. “But I am not committed to someone that would create pilikia amongst the candidates. I am speaking today about Tiffany Edward Hunt!”

Hampton lashed out at Hunt for holding the “Roast 4 Puna” event on July 18. Billed as a “hilarious campaign party hosted by friends of Tiffany Edwards Hunt featuring the music of R.I.T.A., comedy sketches & performances poking fun at non-controversial subjects”, RJ cried foul because she says the event poked fun at all the candidates, including Hunt. Occupy Hilo filmed the event and posted a few different edits on Youtube, however the portion relative to Hampton’s argument is 9 minutes and 40 seconds into the video found below (new; now includes video).

Hampton didn’t stop there. She aggressively laid into the election coverage found in the monthly Big Island Chronicle newspaper, which is owned by Hunt, although Hunt says she has turned editorial control over to Alan McNarie during her campaign. Hampton slammed a copy of the paper down on the table, prompting forum moderator Steve Hirakami and other candidates to try to calm her down. Eventually, Hampton stormed out of the forum, saying it was “a trap.”

Tiffany-Edwards Hunt happened to be next in line to give her closing statement. She talked about the outburst during her allotted two minutes.

The Puna Pono Alliance organization says its mission is to “build alliances that support environmentally safe, culturally sensitive, economically viable, and sustainable energy alternatives for Hawai`i County.” They have been active in the fight to stop the geothermal industry from expanding in the Puna area. Members have also been vocal in their opposition to genetically engineered food crops.

RJ Hampton shares many of the same views as the members of the Puna Pono Alliance on topics like geothermal and GMOs, but she differs with some of the Alliance principals over a bill proposed in the state legislature, SB2274 relating to “Sustainable Living Research”. Hampton led a campaign to kill the bill, which died in conference committee. Hampton was questioned on her efforts during Saturday’s forum.

Puna Pono Alliance wrote this in a newsletter before the event:

The special interest, funding candidates, intend to come to our communities through our council selling incinerators, geothermal, fracking, GMO, and many other controversial projects. These are bottom line enterprises, making as much money as fast as possible is the main objective. We have seen time and again special interests that foul our water, endanger our health, our aina, and our families future, for profits. We need to know who we vote for, and who they will represent.Puna Pono Alliance newsletter promoting the forum

Along with council district 5, the event also featured candidates running for Hawaii County Council district 4 and State House district 4: a total of 18 candidates. We will post full video of all three forums here on Big Island Video News.